It wasn’t by accident that hubby and I collectively consumed more carbs than we ever have in a single sitting. That’s including outings where we entirely polished off the inclusions of table bread, rice and french fries in certain meals.

We were checking out the newish North Park Breakfast Company, a half sibling to the locally grown Breakfast Republic chain, which falls under the Rise & Shine Restaurant Group. 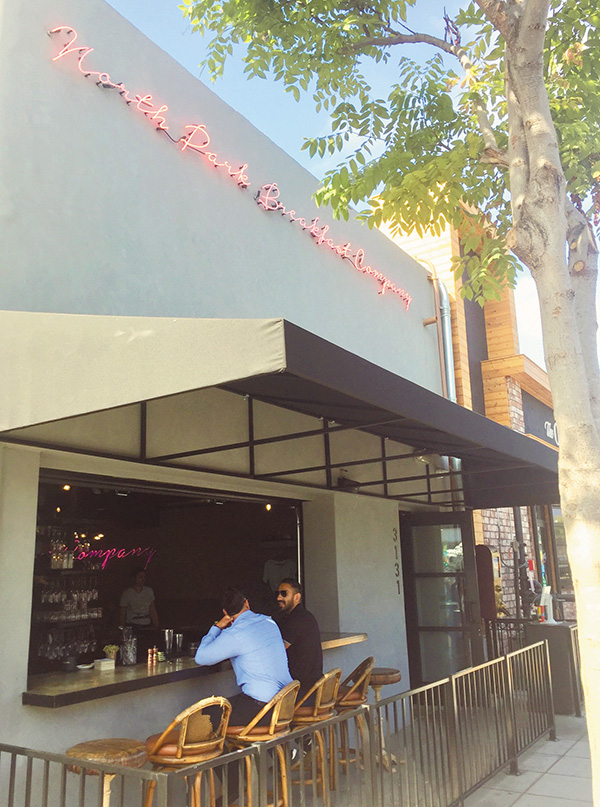 The newcomer offers a few more healthier options in comparison. But we knew from the get-go that things like the vegan scramble and seven-grain bowl weren’t destined for our gullets. We instead dove into a rousing parade of savory and sweet dishes, which when eaten in succession could potentially send glucometer readings into outer space.

There were purple potatoes and gold fingerlings in abundance on a plate of Chinese-inspired fried rice Benedict. We also ate a fantastic potato rosti, whereby the mashed spuds were oven-toasted and had Gruyere herbed cream cheese folded into them. The fresh salmon draped over the rosti seemed incidental.

And then came a savory mashed potato waffle, which played a starring role in one of the most original breakfast dishes I’ve encountered in a while. More on that in a moment.

Ever since Johan Engman brought his Fig Tree Cafe into Hillcrest some eight years ago — and then subsequently opened the first Breakfast Republic in North Park a few years later — he’s become a charitable force within the LGBT and mainstream communities. He’s donated time, money and meals to various organizations, including the Imperial Court de San Diego and Rob Benzon Foundation.

As of late, he started giving $1,000 to a particular charity of choice each each month. August’s recipient was Miracle Babies. The September donation is yet to be determined.

This latest breakfast venture is a culmination of Engman’s ever-expanding restaurant empire. And it may be my favorite so far, although I’ve yet to check out his conceptual redo of El Jardin in Liberty Station, which now carries “Cantina” in its name.

North Park Breakfast Company’s design is artistically cold and industrial but warmed by the restaurant’s name in neon Sanskrit. The glowing signage stretches above the outside entrance and repeats across a gray, cement wall inside. Another wall is clad in metal, although it blends tastefully with wood ceiling beams and familiar Edison-bulb fixtures. To our surprise, there’s a patio in the back and another on the roof.

Settling into a pillowed banquette, hubby sated his caffeine craving with a “dirty beet latte.” It combines espresso with fresh beet juice, ginger, cinnamon, honey, and oat milk. He loved every sip. 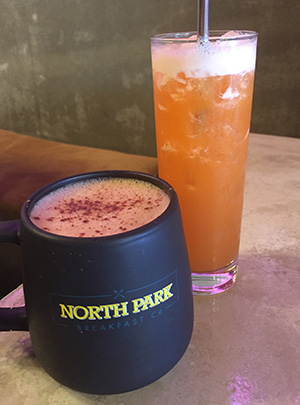 I ordered a “carrot top” blending the juice of carrots with soda water, ginger, lemon, and angostura bitters. Though refreshing, the ingredients were overtaken by the soda water.

The drink list offers vast choices, from fun and complex cocktails such as a bloody Mary garnished with bacon and eggs, to local draft beers and flavored kombuchas on tap. Much like the whimsical offerings at Breakfast Republics, the surprises and trendy overtones don’t stop here.

Eggs played naturally to the salmon and potato rosti as well. Although when yet another pair teamed up with the mashed potato waffle and its adornments of cheese sauce and spicy sausage, I wondered how long it will take before the dish is spotlighted by some national food magazine or TV show. It deserves the recognition. 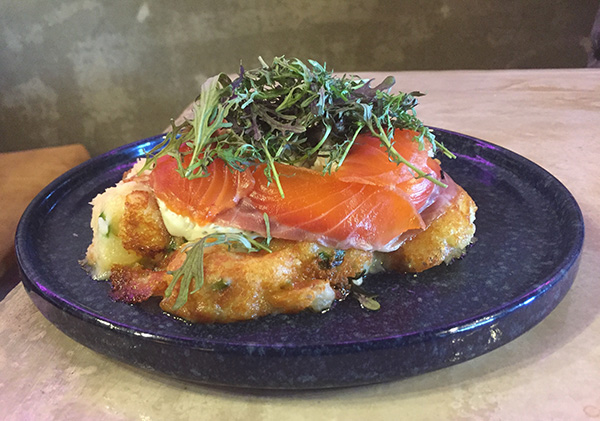 The mashed potato waffle can be ordered a la carte or as part of a customized trio of pancakes, French toast or other waffles.

Ours was accompanied by a tiramisu pancake that successfully matched in flavor the Italian dessert, thanks to mascarpone cheese and espresso syrup in the construct. The third item we chose was peach-almond French toast. It beckoned to modern Southern cuisine and smacked of addicting sweetness from fresh peaches and sugar-kissed butter sauce. No syrup required. 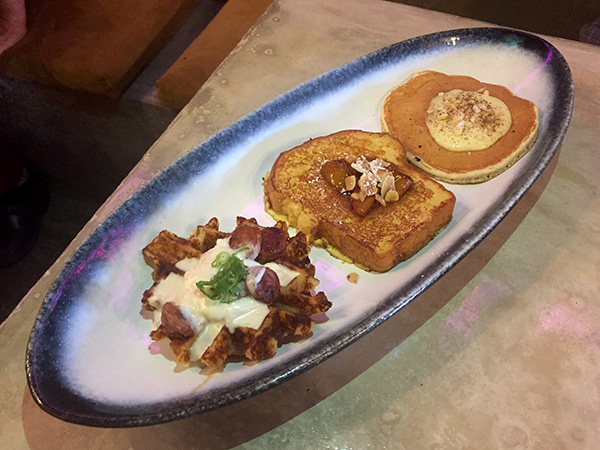 Other menu choices include chilaquiles suizos, chicken confit with grits, crispy chicken thighs and shrimp enchiladas with black mole sauce. They all come with poached eggs. 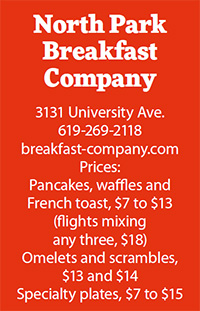 There are also sidekicks such as brioche donuts, scones with Devonshire cream, and thick-cut bacon rubbed in brown sugar and coffee dust.

When we visited, the restaurant was on the cusp of becoming widely known within the neighborhood. We visited around 9:30 a.m. on a weekday and barely beat a sizable wave of customers, although lines outside never formed. Weekends are a different story, we’re told. But based on what we tried, the food with all those assorted potatoes is worth a reasonable wait.