DR. IAN JENKINS: ‘Three Dads and a Baby’ Tells the Story of the First Polyamorous Family to Secure Three Parents Listed on a Birth Certificate.

Meet Ian Jenkins — he’s a doctor, living in San Diego, a specialist in hospital medicine and a professor at a major university. He’s been with his partner, Alan, for 17 years. And they’ve been with their partner, Jeremy, for eight. And they have two biological children — Piper, who is 3, and Parker, who is 14 months. Piper and Parker are half siblings who each needed two women to give them life.

What’s that, you say? No, you heard me correctly. Ian, Alan, and Jeremy are a same-sex “throuple.” Piper and Parker were conceived with eggs donated by a longtime friend and carried by surrogates. Thereby lies a tale of patience, love, and persistence that broke new legal ground and changed the way California law defines family: Piper was the first child ever to have a poly family listed on a birth certificate, paving the way for her younger brother two years later, and the future children of other polyamorous parents. The story of how three poly dads, three amazing and giving women, and an intrepid and compassionate team of medical and legal experts built this uniquely wonderful American family, is at the center of Dr. Jenkins’ upcoming book, “Three Dads and a Baby,” which will be released in early 2021 by Cleis Press (an imprint of Start Publishing) and distributed by Simon & Schuster.

While Ian admits that of course his family is unique, he questions the perspective of people who think that it isn’t “normal.” “I’m pretty sure it’s lifelong monogamy that’s weird,” he says. “Our culture is filled with all of these stories about longing and infidelity. It’s natural for us to feel affections for more than one person. What’s exotic is that we actually did it — we made a life many people think of as an unattainable dream, but we’re ordinary people otherwise. We have the same conversations about what to have for dinner, what to watch on TV.” 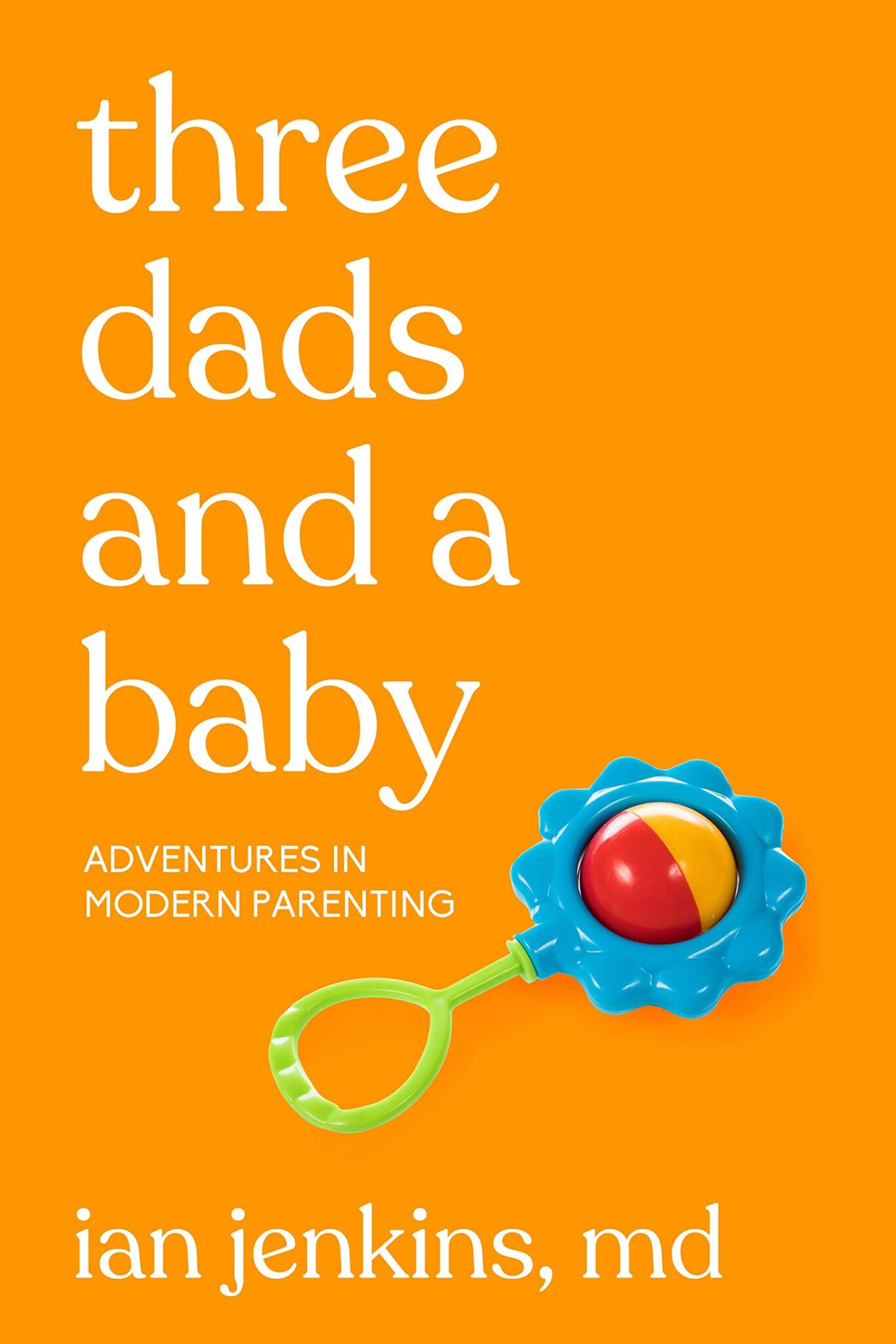 “After all,” Jenkins points out, “many parents long for another partner — more love, more help with the kids — we just went out and made it happen!”

Navigating the endlessly complex and often heartbreaking process of creating life through a series of expensive medical procedures, “Three Dads and a Baby” shares a whirlwind of a surrogacy journey. The throuple had to weigh decisions about embryo adoption or creation, search for women willing to have their eggs extracted or host a pregnancy for three men, and negotiate, fight, and ultimately change a medical and legal system that privileges heterosexual couples. Though it might seem like an ill-conceived narrative cooked up in an Hollywood executive’s office (“It’s ‘Tiger King’ meets ‘Baby Mama’!”), this is a real-life story, and Jenkins relates these trials and tribulations with even-keeled humor and a humble self-awareness that the more sensational aspects of the story pale in comparison to the universal themes of love, parenting, and bonding that almost anyone can identify with.

Writing the memoir also allowed him to flex a creative muscle he’s developed over many years. “Maybe it’s because I had a stepmother who was a librarian,” Ian says, “but I’ve always been drawn to literature and stories.” A fiction writer since the fifth grade, Jenkins has always found a way to channel his passion for writing with his “day job” as a medical professional. In addition to research papers, he’s published several medical narratives about life and death in the hospital and his experiences as an LGBTQ+ doctor.

After completing “Three Dads and a Baby,” he’s turned his focus to two other projects: book length medical memoirs and inclusive fantasy novels. “Jeremy has always been a fan of fantasy fiction,” says Jenkins of his younger partner. “He challenged me a few years ago to write something in that genre.” Jenkins’ latest fiction project, geared toward young adult readers, is a high-fantasy adventure that pits strong female, multi-racial, and LGBTQ+ characters against a disapproving dominant culture. Meanwhile, he’s working on a medical narrative focused on the very real issues of illness, death, and survival in the world of hospital medicine.

Still, Ian’s unique family life is anything but fantasy. In fact, he admits he has been somewhat relieved by the normalcy of their life in the time since his book was completed. The conception and birth of their second child, Parker, was, comparatively, “a breeze.” Everything that was so challenging and unique in bringing Piper into the world — getting that third name on the birth certificate, winning over skeptical lawyers and reproductive specialists, creating a parenting agreement — was all effectively in place when her younger brother came along. “It’s not normal, compared to what other people go through,” he observes. “But it still feels completely natural.”

Of course, in the era of the pandemic, nothing feels quite normal. His partner Alan shifted to practicing psychiatry from home, while Jeremy (essential personnel for a zoo hospital) and Ian (working on the front lines of the pandemic fight) continued working in person. They’ve had to make drastic changes, like not relying on a beloved nanny who had to socially distance for several weeks as a precaution, while ensuring their kids are still engaging socially. They’re discovering the same thing so many parents have learned: “Being with two lovely kids all day can tire you out just as much as a late shift,” says the good doctor, who’s particularly grateful to Alan for shouldering much of the parenting load so far. The pandemic has also meant increased stress on Ian at work, where he often cares for sick and dying COVID-19 victims, covered in PPE.

Because of his lifelong commitment to issues regarding equality and access, Jenkins is passionate about raising his kids in a feminist, anti-racist and affirmative mindset. “I want my daughter to know that she’s as tough as anyone and can do anything she sets her mind to,” he says, knowing that she will benefit and gain strength with the love and support of three dads (and two maternal figures).

What’s so unusual about that?