The month of March we honor the work, strength, compassion, and courage of the women in the world. I would like to thank some women from my life and our community. Their impact on my life and the lives of others is often gone unnoticed or unappreciated. Let’s take a moment to see the women I feel have influenced me and/or have taken action to make our community better.

Before my time in San Diego, according to my research, a small group of women took it upon themselves to fight a law that was unjust and unfair. It was known as the ‘Cross Dressing Law’. Municipal Code 56.19 in the city of San Diego was a law that specifically targeted Cross Dressers and Transgender people, mainly of color. The law went into effect in 1966 and prohibited people from wearing the apparel usually worn in public by the opposite sex with the purpose of deceiving another person or perform an illegal act. The police said the law was targeted at prostitutes, but everyone knew that the police used the law to harass, humiliate, and arrest Trans Women of Color.

During the fight to repeal this law, Janet, not her real name, was one of the women who met at the Craftsman Hall, later to become the San Diego LGBT Center, at a small conference organized by an LGBT activist Paul Conlon. Janet and others remained anonymous to protect themselves from loss of employment and being harassed in society. This young woman, full of courage, stood before the newly formed Human Relations Commission and pled her case to have this law repealed. Two other women who stood up and fought against this law were Elena Albee and Dolores Dickerson, founders of a local organization named Trans Action. The law was successfully repealed in 1998. I admire these women for doing something so powerful at a time when their very safety could be put in jeopardy. When reading the story about their fight some years ago, it truly inspired me to stand up against injustice. I had the pleasure of knowing Elena Albee. We met a few years after this fight against discrimination directed at Trans Women, mainly women of color here in San Diego. She was a feisty lady who wasn’t afraid to say what she meant. She taught me to be proud of who I was and proud of my community. She taught me that you can fight, and you can win. She taught me that change was possible.

Another Trans woman who inspired me is a woman I met early on into my activism. We met many years ago when being Transgender was a lot more unsafe than it is today. We worked together on an issue involving law enforcement. From the moment I met her I could feel the courage and dignity with which she held herself. It was easy for me to go about my life as a Trans man. I could blend in, be myself and appear to be a straight white cis human. This young lady, like so many other Trans women didn’t have that luxury. She is also of color which brings about more barriers.

She was horribly harassed by a few members of law enforcement here in San Diego. When word got out a meeting was held to which I was invited. I was immediately made aware of how strong a woman she really was. She stood in the faces of those who tormented her and didn’t flinch. She told her story with the passion of one who knows they have been wronged and expect justice. What I loved was that she didn’t ASK for retribution. She asked for long term justice on the issue. She asked that the issues in question be corrected. She asked that future Trans Women never be treated the way she was. Because of her courage and her love of her community, we were able to do trainings where she looked them in the eye and told her story. I was later able to do trainings all across many law enforcement platforms. Policies were changed and the effects of her bravery and wisdom created changes that are still in effect today. She now has a successful career and is living a full life as a proud Transgender Woman. Thank you, Paris Quion for your bravery, your power, and your friendship. 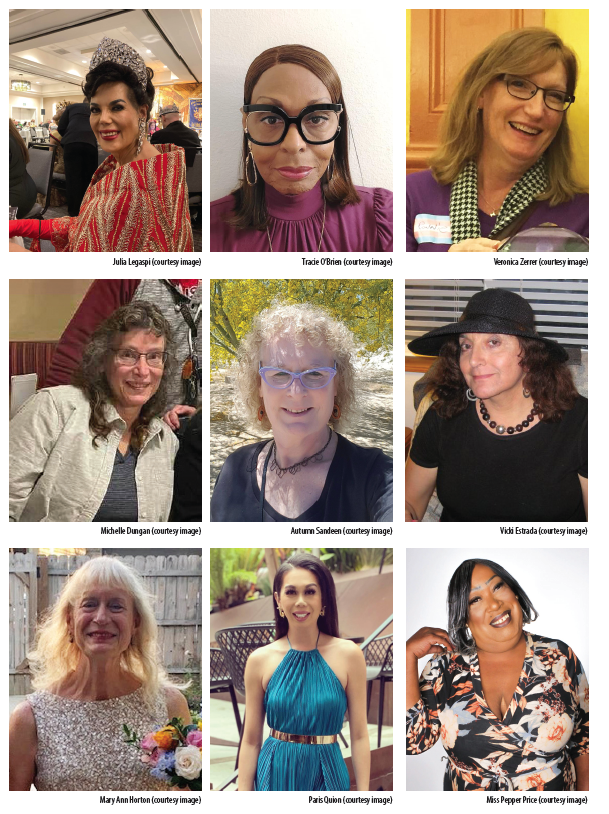 I also salute the following Transgender women for their many years of dedication, their service and fighting for equal rights for the Transgender community here in San Diego. These women made lasting changes to our community, to workplaces, to social justice, and law enforcement. Julia Legaspi, Tracie O’Brien, Veronica Zerrer, Michelle Dungan, Autumn Sandeen, Vicki Estrada, Mary Ann Horton, Paris Quion, Miss Pepper Price, and so many more.

Speaking of celebrating, I have a few upcoming events to share with you. As we exit winter and jump into Spring here are some save the date events for you.

On April 8, 2022 there will be the 19th annual San Diego Transgender Day of Empowerment. This event was conceived to be the opposite of the Transgender Day of Remembrance, a very solemn event which happens every November 20th. The Day of Empowerment is a day to celebrate, acknowledge, and come together as a community. Unfortunately, due to COVID, this year’s event will be virtual again. Join us for some great Trans speakers, Community Awards, entertainment, and acknowledging our 2022 Scholarship award recipients.

Another community event is the Trans Hang Out in the Park. Every third Saturday of the month from 1 P.M. to 4 P.M. we are meeting in Balboa Park to just hang out and get to know each other. Bring your own drink and snack, chairs, blankets, even a game to share. Meet at Spruce and 6th Ave, look for the Trans Flag. The next Hang Out will be March 19th starting at 1 P.M. I look forward to seeing more of you there.