Since 1987, America has recognized March as Women’s History Month. This is an important time, especially for young girls and women to see others acknowledge and see themselves having a part in shaping our collective advancements and history.

Unfortunately, during March many fail to center the fact that Women’s History is Queer history is Trans history. This is not a surprise to our community. Early feminists such as Betty Friedan would call lesbians the “lavender menace” while serving as president of the National Organization of Women (NOW).

Despite progress, the mainstream depiction of Women’s History would leave us to think that Queer and Trans women have made no significant contributions.

We know this is not true. Much of our modern liberation movement was founded on the hard work, labor, and activism of the Trans, Drag, and gender non-confirming community.

Early trailblazers such as Sylvia Rivera and Marsha P. Johnson were Trans BIPOC activists during the time of Stonewall and co-founded the Street Transvestite Action Revolutionaries (STAR) House because, as sex workers who had experienced homelessness, they saw the needs of the Trans, Drag, and gender non-conforming community were not being met by the Gay rights groups of the time.

Housing has always been an issue for Trans and gender non-conforming community members who often experience trauma and rejections from both the straight and Gay communities.

Locally, we are continuing our fight for our Trans and gender non-conforming siblings and kiddos. Leading those efforts for the North County LGBTQ Resource Center is Leea Pronovost (She/Her).

Leea was born and raised in Springfield, Massachusetts. Early in her career, she was a quality engineer in the Aero Space Industry. She left mechanical engineering for telecommunications engineering, which she did for 37 years.

In her teens, she became very interested in religion and spirituality. While raised a strict Roman Catholic, she struggled with who she really was because she was identified male at birth, and this was completely against her religion.

After a near death experience in 2006, she wondered what life was truly about, and concluded she could not live her life for others.

Leea came out and told everyone that she could not live a lie anymore and had to be true to herself. At that point she started living her life. After truly making the decision, she became an activist and advocate for the trans community. She volunteers for the detention project at the Transgender Law Center and is a team leader for operators at the Trans Lifeline.

She also facilitates our Come As You Are (CAYA) support group, chairs the Gender Advocacy Project, and now serves as Case Manager for Unicorn Homes.

Unicorn Homes seeks to provide housing stability with an ultimate goal to reunite families and rectify problems whenever possible. Unicorn Homes also provides paths to mental health resources, job readiness, life coaching, and independent living skills. Forty percent of homeless youth in California identify as LGBTQ and family rejection is the number one reason why LGBTQ kids are on the streets.

Leea’s case management, advocacy, and program facilitation has literally saved countless lives. And that is why Leea Pronovost is our hero for Women’s History Month. 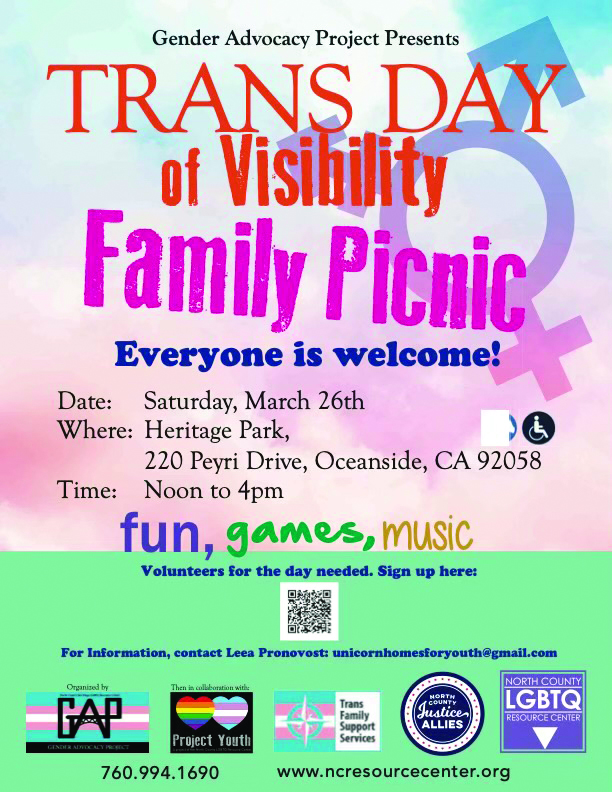 This Women’s History Month, join The North County Center and Gender Advocacy Project for a Trans Day of Visibility Picnic.