In honor of Black History Month, I felt I should dig into the past a bit and find some heroes from our community. I picked only two so I could get more in-depth with their stories.

First is the amazing Frances Thompson (date of birth unknown-1876). She was born into slavery and became emancipated after the Civil War. She was living with a friend in a community of emancipated slaves in Memphis, Tennessee.  From May 1-3, 1866, a series of post-war violent events (referred to as the Memphis Massacre of 1866), ignited by political, social and racial tensions, tore through the city. During the fighting, five women were raped, 75 people were injured, 46 African Americans and two white people were killed. 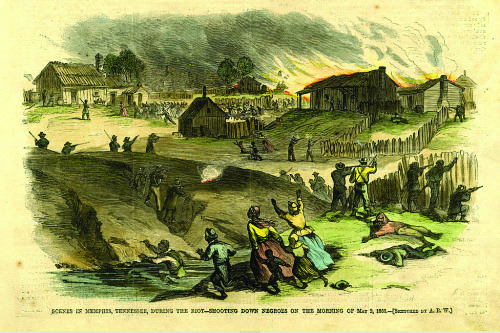 Thompson and her friend Lucy Smith were in their house when the rioting began. Suddenly, seven white men broke into their house and demanded women to sleep with, after which they raped both ladies repeatedly. Later that year, congressional hearings were held concerning the riots. Thompson testified against the seven white men who broke into the house and raped her and Smith.

It is believed that Thompson is the very first transgender person to have testified before a congressional committee in the United States. Imagine the courage it took for her to do this while living in a Confederate state where people were still angry about losing the Civil War and unable to forget their hatred for black people living free all around them. And yet, only months later, she had the courage to stand up in front of an entire committee of congressmen and the public, and point out the seven men who had raped her and her housemate. Thompson and Smith stayed put in Memphis after the hearings.

Ten years later in 1876, Thompson was arrested for being a man dressed as a woman, her arrest for transvestism was used by newspapers in Memphis to discredit her previous congressional testimony that she was raped and smeared her name throughout the city. Vague historic reports say that when she couldn’t pay the $50 fine imposed with the arrest, she was forced to wear men’s clothes and sentenced to 100 days jail time working on the city’s chain gang. She was seriously abused during her incarceration. When she was released, she moved to North Memphis and died there shortly after.

Next up is another name I hadn’t heard before: Willmer “Little Axe” Broadnax (1916-1994). He, along with his brother known as William “Big Axe” Broadnax, was a singer in a gospel quartet. They were singing in the time when gospel music was just making its way to the general public and records were being recorded left and right to keep up with demand.

Willmer began singing with his brother in his teens, right after he began transitioning. They both joined the St. Paul Gospel Singers in Houston in the 1930s. After a time, they decided to move to Los Angeles and try their luck with the Southern Gospel Singers. They only performed on weekends and didn’t tour so Willmer left the group within a year. His next adventure was with his brother in 1940, when they formed their own quartet called the Little Axe and the Golden Echoes.   His brother William eventually left to move to Atlanta and join the Five Trumpets. Little Axe decided to stay with his group and did so until approximately 1949.

He had a beautiful, clean-sky high voice and with the Golden Echoes, he was able to showcase his talents as a frontman. He gave the Golden Echoes a sound no other quartet had. When the Golden Echoes disbanded, The Spirit of Memphis Quartet, a very popular group scooped Little Axe up as their new frontman. With Little Axe singing lead, The Spirit of Memphis Quartet became even more popular. He sang with them for several years and during that time, he became a gospel sensation. He then went on to work with the Fairfield Four and the Five Blind Boys of Mississippi. In 1963, he joined back up with the Golden Echoes and his brother William joined as well. This would be the last time the two would perform together as rock n’ roll was moving in, often using many of the black gospel ways of playing their music. Willmer moved backed to Philadelphia to live with his brother. At this point, no one had ever discovered that he was trans.

In 1992, Little Axe was stabbed to death by his girlfriend in Philadelphia. The one account I could find says he caught his girlfriend in a car with another man, and he ran downstairs to the street with a knife. He yelled at her, then grabbed her arm and pulled her out of the car. A bystander got the knife away from Willmer but his girlfriend picked it up and stabbed him three times. He died a few days later, and the world then found out his secret.

When I think back on our history and then about today, there are so many basic things that have not changed. Back in Frances Thompson’s day, she worried about being discovered, as so many of our trans women and men do today. She just wanted to live out her life in peace and try and recover from the trauma she went through as a child. Does that sound any different than today? She lived in fear and most likely never found love. Yet she didn’t hesitate to stand up and say, “I will testify! I will help you put these men away.” She had an instant, clear, unwavering soul that said, “always do the right thing, never be afraid to stand up and tell the truth, speak for those who can’t and if you see something, say something.” We can all be like Frances: It’s easy, just stand up and do the right thing.

And what about Little Axe? We don’t know anything really about his early life, but we do know that around the age of 13, he transitioned. A young black boy in Houston, Texas. He was able to get to California and use the gift of his voice to make his world better. There were so few out trans men back then, guys like Willmer didn’t have a clue probably what transgender was or that there were other people like him. The guys just transitioned; got the help they could find and melted away into obscurity. But Willmer didn’t roll over and disappear. He had something that he knew he couldn’t resist. He had to sing, no matter what. And sing he did, with such a beautiful voice to share. Traveling all over the South, singing for so many diverse crowds, he could have been killed at any time if found out, but he kept right on singing. Don’t let people shut you down from using your gifts. If you are lucky enough to have a special gift, you need to use it and share it with others. I always think it’s incumbent to do that, in a way that’s comfortable for you. It’s like having a giant pot of gold and waiting to spend it on just the right thing. Then one day you suddenly are dying and realize you never spent one coin. How sad.

Share your gifts, share yourself, and stand up to evil. Thank you to my black trans American pioneers who have shown me the way by how they lived their lives and the sacrifices they made.