Vertez Regina Burks grew up in Brooklyn, New York and was inspired to do volunteer work by watching her great-grandmother do work for her community: “When she walked into a room, everyone respected her. I wanted to be like that.” Vertez’s first experience with coming out was when she came out to herself as a lesbian when she was 10 years old. She earned a Bachelor of Arts degree in Sociology from Bethune-Cookman College and a master’s degree in Special Education from New York University. Vertez also served as a volunteer for the Peace Corps for a time, where she worked as an elementary school teacher while stationed in Liberia, West Africa. After her time in the Peace Corps, Vertez moved to St. Croix in the Virgin Islands where she continued teaching elementary school and special education classes from 1969 to 1980. Vertez quit her teaching job in 1980 and from 1980 to 1985, she worked at a “low-power television station” as a videotape editor while taking classes to pursue her passion for videography. In 1985, she embarked on a planned vacation to San Diego, California to see a friend and never left.

This major turning point in Vertez’s life came after deciding that she would come out to others while in San Diego at the age of 43. By that point, she was practically “clawing at the door to get out” of the closet. After deciding to stay in San Diego, Vertez finally came out to family and friends who all accepted her without question. She then began attending church services at the Metropolitan Community Church and “the rest is history.” One day, she walked into The Center — which was then located behind the Brass Rail — and “was welcomed with open arms” and was very much needed. Burks soon became heavily involved in San Diego’s LGBT community as a volunteer, leader and representative: “I wanted to see all there was to see in the gay world. That’s just who I am.” The first organization Vertez got involved with was Slightly Older Lesbians (SOL), which was “about the only women’s group around at the time.” She was thrilled to have a place where she could be an out lesbian around other out women. SOL met once a month on a Friday for a discussion group and would go out to a bar near Mission Gorge afterward to have fun. This group enabled her to be her most authentic self in a fully supportive environment. Up until this time, Vertez had only known the dominant cultural idea of what lesbians did, which was basically just having sex — but through these experiences with other lesbian women, she discovered true lesbian culture through literature, music and art. Vertez states in an interview with Lambda Archives that the years from 1985 to 1990 were a “changeover” period for lesbian women; since the men were struggling with the HIV/AIDS epidemic, more women were able to take leadership positions in community organizations and volunteer for just about everything. 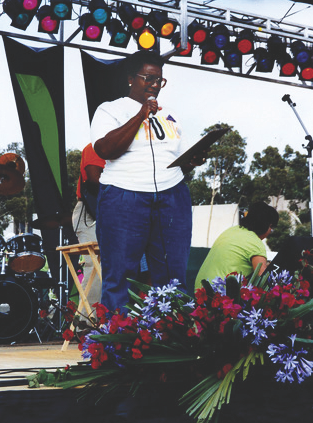 In 1988, Burks volunteered for the Name’s Project’s national tour of the AIDS Memorial Quilt stop in San Diego and in 1989, took part in the founding of Lesbians and Gays of African Descent United (LAGADU) alongside Marti Corrine Mackey, John Guinn, and others. LAGADU was a women’s and men’s group and as such, the men met once a month on their own, the women did the same; these gender-divided groups acted as support groups, whereas the collective meeting was an arena for discussing organization business, fundraising, events, and other matters that involved all members. Vertez states that she “blossomed” during her time with LAGADU; she was volunteering for everything, meeting more people like herself, and establishing a place for herself within the LGBT community. According to Vertez, LAGADU was formed at a time when more African American LGBT people were arriving in San Diego (“going West”) and searching for a community. Around the same time, she worked the door and emceed at Shirtails, which started out as a coffeehouse and evolved into a lesbian dance and performance venue.

LAGADU was founded at the same time that other groups for LGBT people of color were emerging, such as Gay and Lesbian Asian/Pacific Islander Social Support (GLASS) founded by Jim Cua and Nations of the Four Directions founded in 1989 by Karen Vigneault, Tom Lidot, Travis Anderson and Bobby Rubio. Because all of these organizations existed at the same time, leaders felt the need to coordinate with one another and formed SPECTRUM, a place for delegates from all of the groups for people of color to gather and update one another with what was going on in their respective organizations and how they could help one another. It also lessened the sense of isolation people of color felt within the predominantly white gay community. SPECTRUM put on yearly programs at The Center, which featured food from all represented nations (catered by Jess Jessop), workshops on people of color and AIDS, and workshops on women’s issues. Even though SPECTRUM functioned for a few years, Vertez claimed that “it lasted as long as it was needed.” 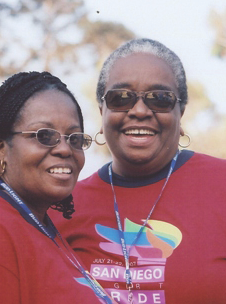 In August of 1990, Vertez went to Vancouver, Canada to volunteer for Gay Games III, where she worked hard as a bartender. Being at an event of that nature, seeing the Virgin Islands contingent, and feeling the sense of community pride “brought tears to [her] eyes…we came so far.” 1990 was also the year that her friend Christine “Chris” Kehoe sponsored her to be on the San Diego Lesbian and Gay Pride Committee, though Vertez was nervous about participating as she was not out at work. During her time on the committee, she worked with other notable LGBT San Diegans including Toni Atkins, Jeri Dilno, Scott Fulkerson, and Doug Moore. After working on the Pride Committee, she was elected co-chair and served with co-chair Larry Baza from 1991-93. One year after marching at the front of the parade next to Baza, a coworker mentioned to her in the hallway that he had seen her on TV, to which she replied, “Yeah! At Gay and Lesbian Pride!” Coming out at work was “freedom” for her, stating that “once you come out, there are no more fears.” On August 3, 1991, Vertez, Renee Richetts, and Erika Shatz hosted a safe-sex workshop titled “Hot, Healthy, and Safe: Lesbian Sex for the ’90s” on behalf of The Center’s Lesbian Health Project. The main program focused on presenting information on the transmission of STDs and HIV between two women, erogenous zone health care, and hygienic use of sex toys in a safe and supportive atmosphere. In August 1993, The Center’s then-Executive Director Scott Fulkerson announced that Vertez would be The Center’s representative for the LIFE AIDS Lobby with Doug Case as her alternate. LIFE AIDS Lobby was an organization (established in 1986) that aimed to create a “statewide advocacy network” that could be organized into a Sacramento lobby presence representing the LGBT community and those affected by HIV and AIDS. In July 1994, Vertez was awarded San Diego Pride’s Community Service Award in recognition of her dedication to the community. In September 1994, Vertez served on then-Mayor Susan Golding’s Gay and Lesbian Advisory Board where she and other LGBT leaders chose community issues such as AIDS, anti-LGBT discrimination, youth issues, and lesbian health concerns to put in front of the mayor so that appropriate action could be taken. Others on the advisory board included Dr. Michael Clark, Leslie Horn, Dr. Garrett Dettling, Cynthia Lawrence-Wallace, Nicole Murray-Ramirez and Tony Zampella.

On July 8, 2000, “hundreds of women who love women” and their supportive friends attended the third Dykes and Friends March and Rally. Dykes and Friends was the new name given to the original Dyke March, which took place in 1997; there was a two-year gap between the first and second march which took place in June 1999. The march went through Hillcrest and ended at the rally, which was held in The Center’s parking lot. Vertez spoke about her experience as a lesbian woman at the 1999 and 2000 rallies; other speakers included Toni Atkins, Bonnie Zimmerman, and Teresa Oyos. Vertez’s years of endless dedication to San Diego’s LGBT community was recognized at the 2005 Nicky Awards, where she was honored with the Board of Governors’ Lifetime Achievement Award. Vertez continues to lend a hand in the community when she is needed and employs her proficient videography skills in filming Pride’s official videos.

On behalf of our community, we thank Vertez deeply for her service.