Following the fourth national LGBTQ visual art exhibition, Hillcrest’s premier art gallery, The Studio Door, celebrates its 7th Anniversary with San Diego Drag Icons. The art of drag will be given the spotlight featuring fabulous costumes and paintings. Donations of funds and nonperishable food items from the public will be accepted, along with a percentage of all gallery sales during the exhibit, benefiting Emergency Food Voucher Fund and Take What You Need Tuesdays. 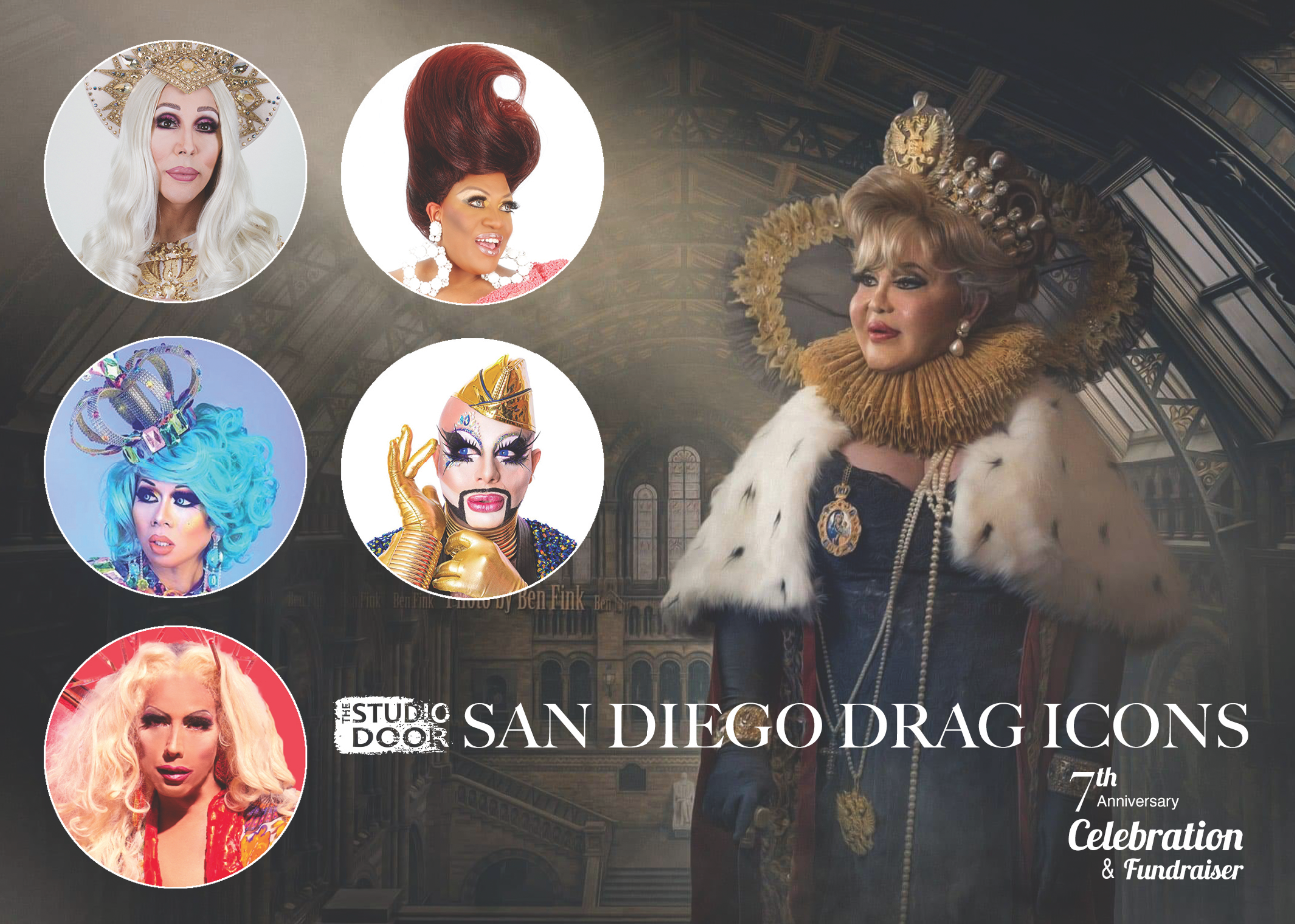 Fashionable, campy, and outrageous, Drag performers have had a long history within the community to bring attention to important issues and raise much needed funds to help our brothers and sisters in need. The Studio Door and Imperial Court de San Diego have joined forces to continue that tradition by gathering a handful of San Diego’s most iconic Drag Icons to dress mannequins in their celebrated looks. These icons not only continue to entertain us, but with this exhibit, are applauded for their activism and support:

Pearl • Contestant on America’s Got Talent

Paris • Legendary Designer and GM of Inside Out

Pairing with the fashion, The Studio Door will showcase transformative paintings on the subject of Drag Queens by visual artists:

“This is the gallery’s first exhibition to reflect on the cultural importance of Drag in our culture,” said owner Patric Stillman. “Spending some time with these artifacts and paintings, I hope patrons will consider how our community combines seriousness, comedy and gender to entertain and empower.”

The Studio Door is using this special exhibition to support two food programs that have risen up to meet the challenges of the coronavirus pandemic. A minimum of 15% of all art sales in August will be shared with two programs:

Imperial Court de San Diego’s Emergency Food Fund Voucher Program (also known as EFV) was originally started last year as our community bars closed. Funds for the vouchers were raised initially to support four community members who lost their jobs. Since then the program has flourished, allowing the Court to help more people in need as the pandemic winds its way through our lives.

Take What You Need Tuesdays was started by Darnell Williams last year. Williams was horrified by the long lines of cars at the stadium filled with people asking for food assistance. What started as a neighborhood grass roots food drive turned into a sustaining program serving 200 households a week.

The gallery will encourage patrons to donate funds and non-perishable food as they visit the exhibit. All donations will go directly to the designated food programs.

“I am thrilled and honored to be included in the San Diego Drag Icons exhibit at The Studio Door and to have the opportunity to share a little bit of our Drag magic with our fellow San Diegans up close and personal! More importantly, I am heartened to support the EFV Fund and Take What You Need Tuesdays. The tireless efforts of caring individuals in our community continues to protect and care for the vulnerable and I’m here for that,” said, Drag Superstar Chad Michaels.

On a Personal Note

For gallery owner Patric Stillman, the power of drag is personal. In 1982 at the age of 20, Patric became friends with Clá Brewer whose drag personality was Samantha Fox (named by her drag mother in the House of Fox and not in tribute to either the adult screen actress or the pop singer of the same name).

“As I made my entry into adult life, Clá became a close friend. Though we were the same age, he challenged my preconceptions, encouraged my creativity, and showed me that life was full of possibilities. Sometimes a bit too guarded of our friendship, he often came across as jealous and bitchy, but I knew he always had my back,” said Stillman.

“Having moved to town from Atlanta, GA, Samantha had her official coming out in town at an autumn ball, for which I was her escort. Clá spent weeks sewing a hand beaded princess gown. His excitement to participate was short lived once we arrived as the local Queens weren’t quite sure what to make of him. I’ll never forget, the night ended with him yelling ‘taste the back of my wig, bitches’ in a microphone to the established Queens. Samantha wasn’t one to be suffer fools.”

“Two years later, I was living in San Francisco and Clá was in Seattle. He telephoned me in tears when his roommates kicked him out of their apartment because he had become sick. It was the early years of AIDS and the community was terrified of what was still a mysterious illness. He was afraid I would reject him after he called his parents, who told him not to come home and to have someone let them know when he passed away. He was desperately alone. I flew to his side and left as he was moving into a new gay shelter. Tragically, I never heard from him again and it took a year to confirm that he had passed days after I saw him. At 22, Clá was the first person I lost to that horrible disease. That loss transformed my life as I worked for decades in service to our community.”

“For me, this exhibit is two-fold. It’s a celebration of the gallery marking its official seven-year anniversary. It’s a reminder of the power of our community to be true to who we are. It’s an opportunity to give to those who are less fortunate. And for me personally, it’s a tribute of a remarkable friend. I hope everyone comes by and helps however they can.”