I started giving regular tours of the San Diego History Center’s “LGBTQ+: Stories of Struggles and Triumphs” exhibit in January 2019. I had no idea how much joy being a part of this exhibit would bring me.

Volunteer Zach Shattuck with the two ribbons with which he identifies with, transgender and gay. (Photos by Lambda Archives)

When I first realized I was trans several years ago, I couldn’t imagine anything more shameful. Only by combing through history and finding us across the globe, in palaces and treasured positions in societies across millennia, did I begin to find peace with my trans identity. As a man, I later came to understand my sexual orientation not queer or bi, but as gay, and for the first time I was struck with loathing. Recalling the history I had already studied in school and my spare time, I was filled with a growing panic. Where was I in history? What did it mean that I couldn’t find us anywhere? What, I worried, was wrong with me if we didn’t exist? While learning men had relationships with each other throughout the world and across time was helpful in arguing against homophobes, affirmation of existence simply wasn’t enough as a gay man coming to terms with his identity. I needed faces. I needed to know who we had been so that I could find a vision of who I might be capable of becoming and, more importantly, how I could find pride in a new identity which had left me feeling lost. 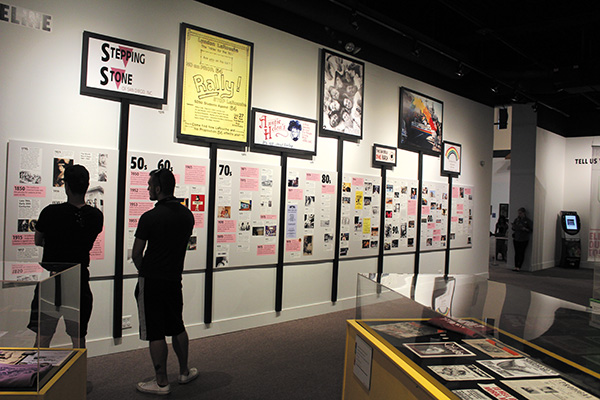 And then I found us. How incredible we are!

It’s easy to hate yourself when you’re left with nothing but the sentiments of your evangelical parents. It is much harder to do so when you know that playing on your same team stands a lineup of some of the most incredible people history can offer.

You mean Martin Luther King Jr. didn’t learn Gandhian tactics of non-violence by himself? A gay man counseled him? A gay man who, by the Montgomery Bus Boycotts, was a seasoned activist and almost singlehandedly planned the March on Washington? No one ever told me Bayard Rustin was so amazing!

And don’t even get me started on Larry Kramer, Freddie Mercury, or Walt Whitman.

In desperately trying to avoid my identity as a gay man, I hadn’t realized how hungry I was to find myself and the stories that came before me. Finding not only a plethora of gay heroes, but an entire story of how our community has grown and fought for our right to exist was essentially introducing a lonely kid to Marvel and D.C. Comics, and the San Diego History Center’s LGBTQ exhibit is like the X-Men’s hall of fame! Being a docent for an exhibit specifically on San Diego’s LGBT history means that I get to spend my free time showcasing the incredible power of our community and the heroes who have brought us here.

While Cyclops is confident because no one can ever beat him in a staring contest, Jess Jessup had nothing but the fierce determination of a man when he began dancing with his dates as he wanted at a time when holding hands with another man risked arrest.

Wolverine is bold because he doesn’t die, but Nicole Murray-Ramirez fought San Diego’s cross-dressing ordinance, Municipal Code 56.19, on his own in court — years before Stonewall!

Storm can bend the weather to her will, so of course she’s courageous. Alice Lee brought the president of the United States into her house before 1910 while living openly with her partner Katherine.

Every week, I am awestruck walking through a rich and uplifting history which is rooted in the very area I live. I’m humbled by the stories surrounding me, and I’ve been ebullient with realizations that this narrative not only is celebrated within the exhibit but colors my everyday life. The dozens of hours of research I poured into learning this history have shown me not only the incredible force and courage of my community, but how the world they both envisioned and lived in exists today. In the 1970s, the Denny’s near my house was known as “the gay Denny’s” because that’s where gay men and women would meet late at night. I’ve stood in the room where some of the earliest meetings for the San Diego Democratic Club took place. Ten minutes from my house I found Lambda Archives, a treasure trove of primary documents and testaments preserving the narratives I’ve come to learn and share. I’ve met Frank Buttino, Bridget Wilson, Toni Atkins, and Todd Gloria. I’ve been inside the house where the third gay community center in the United States began. I can trace the opening of that center in January 1973 all the way to our present. I can tell you so many ways that The Center, regardless of its location, has provided for and strengthened our community. I’ve startled friends in loud excitement realizing that Mama’s Kitchen is still around and collects food at Hillcrest’s Ralph’s every Sunday. The first time I walked by an Auntie Helen’s Community Thrift store, I stopped in my tracks and stared in shock that this seemingly mythical, community rooted organization still carried on the moving legacy created by Gary Cheatham.

Learning my history is how I’ve been able to find my pride as part of this community. That pride, more than any other reason, is why I have been so excited to be a part of this exhibit. I want to help preserve this incredible story and share it with other people so that they find the same strength. I am honored to present so many incredible ways we have flourished, introducing heroes and legends as points of pride for us to remember as we learn to embrace ourselves and continue toward a better world.

— Lambda Archives, a 501(c)(3) dedicated to collecting, preserving and teaching the history of the lesbian, gay, bisexual and transgender people in San Diego and the Northern Baja California region, is located at 4545 Park Blvd., in University Heights. To learn more, stop in or visit their website at lambdaarchives.org.