The San Diego LGBTQ+ community and sports have a lot in common, much more than people might realize.

Recently, openly gay professional soccer player Collin Martin signed with San Diego Loyal Soccer Club, an expansion franchise in the USL Championship league. Starting next month, the Loyal will play at Torero Stadium, under a three-year agreement with the University of San Diego, with its home opener on March 7 against Las Vegas Lights FC.

Many San Diego LGBTQ+ adult community members (and their allies) are interested in sports with groups like the San Diego Armada Rugby Football Club, America’s Finest City Softball League, Front Runners & Walkers, Gay Surfers, LezBeHonest Dragon Boat Team, and the San Diego Tennis Federation. SDPride.org/sports has a complete directory of information on these organizations and more. Many of them can also be found recruiting yearly during the San Diego Pride Festival in the Athletes Alley.

There are plenty of sporting events coming up as springtime approaches, such as:

OUT AT THE PITCH: The professional rugby team San Diego Legion takes on Rugby United New York on Sunday, March 8, 3:30 p.m. San Diego Pride will have a tent up with your souvenir gift and game time is at 4 p.m. Tickets are $28 at SDLegion.com 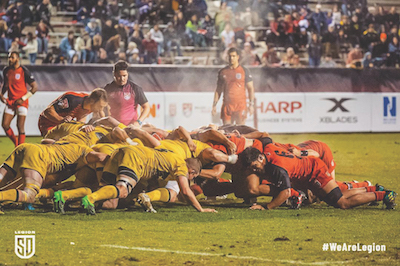 PRIDE NIGHT AT THE GULLS: The San Diego Gulls hockey team takes on the San Jose Barracudas on Friday, March 13, 7 p.m. at the Pechanga Arena, 3500 Sports Arena Blvd. Tickets are $24 at SanDiegoGulls.com 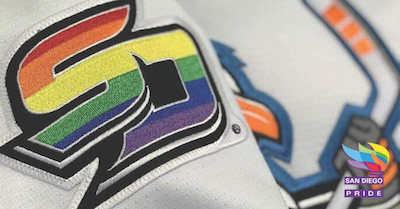 OUT AT THE PARK: The LGBTQ+ community takes over Petco Park as the San Diego Padres take on the Colorado Rockies on Friday, March 27, pre-game tailgate party 4:30-7 p.m., game time is 7:10 p.m. Grab your friends, family and rainbows as we prepare to enjoy an exciting evening of entertainment and baseball when the Padres take on the Rockies at 7:10 p.m. The game will open with the San Diego Gay Men’s Chorus, San Diego Women’s Chorus, San Diego Pride and Padres staff performing the national anthem together on the field. Tickets are $25 at padres.com or to purchase 10 or more tickets, contact Logan Washburn at 619-795-5137 or lwashburn@padres.com. 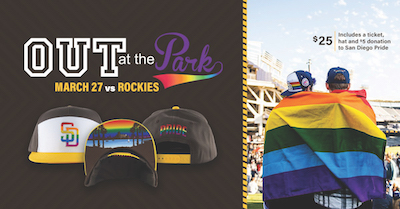 When you visit SDPride.org/sports, you can link to many different sporting events that are free as well, and again, if you can’t be an athlete, be an athletic supporter!

Breaking ground on the San Diego AIDS Memorial in 2020