Nations of the Four Directions

Out of the Archives 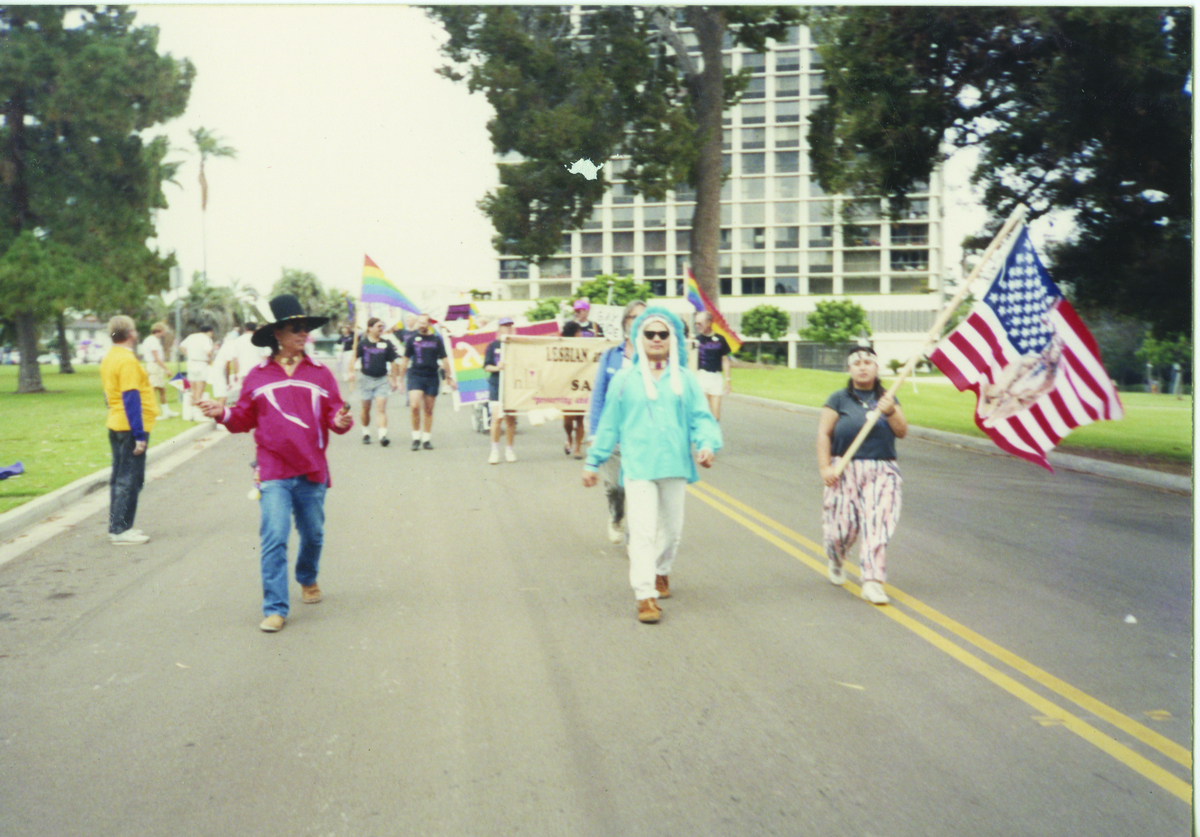 The group aimed to create a support group that kept Native American two-spirit culture alive through lesbian and gay pride, to re-educate people about the highly respected role that two-spirited people had in Native American culture, to unite Native Americans who lived on the reservations with Native Americans that lived in urban areas, and to visibly represent their tribes and identities within the LGBT community. Nations of the Four Directions was the first Native American group of its kind in San Diego history, and represented local tribes, such as Kumeyaay, Luiseno, and Cupeno as well as other non-local tribes like Cherokee, Blackfeet, and Yaqui. The group was formed around 1989 after a San Diego Pride parade with co-founder Karen Vigneault stating that “the spirit told all of us at the same time this is it.” They worked with other LGBT organizations founded by people of color and their leaders, such as Jim Cua and his organization Gay and Lesbian Asian/Pacific-Islander Social Support (GLASS) and Marti MacKey of Lesbians and Gays of African Descent United (LAGADU). The name was developed with the intention of representing all of the Indian Nations, as the “Four Directions” had a spiritual context in Native American culture. The North (white) represented the tribes’ elders, the East (gold) represented rebirth, the West (red or black) for spiritual discipline, and the South (green) represented physical discipline. Being two-spirited in native culture was not something that was stigmatized in most tribes; some considered two-spirit people to be special beings. The group recognized that Native Americans were a forgotten minority within the LGBT community and fought against the racial discrimination and bias that was prevalent in the community at the time.

Native American traditions played a large part in the Four Directions’ meetings. The meetings opened and closed with traditional prayers and the burning of sage, they sang, played drums, and participated in what co-founder Tom Lidot called “spiritual release” with their brothers and sisters. The spiritual component was important, as the Four Directions wanted to help their members in urban areas re-connect to their traditions. Lidot, who had worked on the reservations with the Indian Health Council regarding the AIDS epidemic, focused on connecting urban LGBT Native Americans with their LGBT brothers and sisters living on the reservations. Being LGBT on the reservations was dangerous; Lidot spoke about how the out gay people on the reservation were harassed and physically assaulted in public regularly in a 1996 interview with Frank Nobiletti. He stated that they did not want to be seen speaking publicly with him because he ran the AIDS programs and others on the “res” might think they had the virus. At its peak, Nations of the Four Directions had about 17 members but continued to work with LAGADU and GLASS to enhance the visibility of people of color in the community.

Nations of the Four Directions marched for the first time in the 1990 San Diego Pride Parade and received a great reception from the crowd, with some crowd members with Native heritage running out to march with them. The group dissolved around 1996, when leaders were devoting more time to other projects, but was reformed in 2006 by Karen Vigneault. Karen believed that since there were 18 local reservations (the largest concentration in the United States), an organization that created a sense of community for LGBT Native Americans was much needed. The reformed group ran until approximately 2010 and held weekly meetings at The Center.