What happens when one photographer takes an empty white box and asks his subjects to present themselves the way they want to be seen? It may start a revolution… 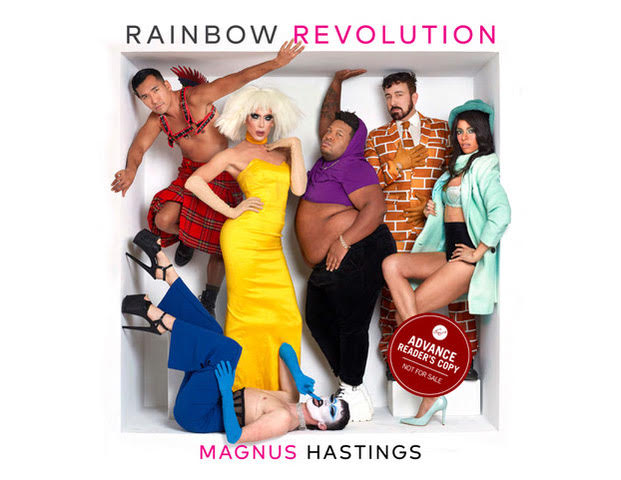 Magnus Hastings’ new coffee-table book, Rainbow Revolution is a collection of vibrant portraits that celebrate the expanding spectrum of queer identity and visibility. Inspired by the photographer’s social media campaign #GayFace — a project that quickly became a viral sensation for featuring an array of people representing all of the different colors of the LGBTQ community — Rainbow Revolution is packed with more than 300 photographs of everyday individuals and celebrities like Kathy Griffin, Boy George, Luke Evans, and fan favorites from RuPaul’s Drag Race. Accompanying Hastings’ gorgeous photos are powerful essays from some of the subjects, detailing their own personal battles in stories that are marked with sincerity and oftentimes, humor. “The essays elevate the book for me and give it a purpose beyond the social media recognition the images have gained,” says Hastings. Magnus Hastings’ “Rainbow Revolution” is available everywhere books are sold on November 24 via Chronicle Books.

Magnus Hastings’ passion to depict the queer community in all its technicolor gloriousness runs deep and it shows in earnest from cover to cover.   “The inspiration for Rainbow Revolution came from watching the world moving to a dark and right winged place,” says Hastings. “I wanted to create a project that was highly visible and unapologetically queer, and one that shouted with pride, defiance, humor, and joy because, after all, if the LGBTQ community is good at anything, it is laughing in the face of adversity.”

The project began in the winter of 2018 when Hastings built a box in his parking garage, a 3-D blank canvas, and enlisted RuPaul’s Drag Race star Alaska Thunderf*ck as his test subject. The idea was to allow Alaska to transform the space in any way she chose, so that the image represented how she wanted to be seen. Alaska nailed up some blue fabric, threw together some shapes, struck a pose and in that instant, magic was born.

Over the next two years, with his camera in tow, Hastings traveled between Los Angeles, San Francisco, New York, and London, building more white boxes and snapping hundreds of mini theatrical pieces that provided hundreds more subjects of varying gender and sexual identities a platform from which to tell their unique stories. Upon shooting close to 1000 boxes, Magnus felt ready to compile some of the best for his second book: Rainbow Revolution.

The end result is funny, personal, political, racy and magical; a beautifully diverse celebration of queer identity and community. Inside the pages are fashion designers, medical doctors, nightlife personalities, sports teams, finance executives, sex workers and more. “Of all the extraordinary people I have been lucky enough to photograph in one of my boxes, I think Ruby has impacted me most,” reveals Hastings.

When Ruby arrived for the shoot, Magnus was introduced to a sweet, shy kid called Jacob who he had to coax into doing a headstand. Jacob’s dads then informed Magnus that Jacob would like to become Ruby, so Jacob left the box, changed into his red dress, and came back. All timidity vanished as Ruby was ready to rock!

“As a child who sometimes wore dresses, I identified with Ruby,” Magnus Hastings reflects. “I was deeply moved to see Ruby’s adoring parents allowing their child to be themselves. It is really exciting that the spectrum of what is accepted and celebrated today is broadening so fast allowing people like Ruby to find their tribe and belong.”

A portion of print sales from Rainbow Revolution will go to Magnus Hastings’ chosen charities: True Colors United in the USA and the Albert Kennedy Trust in the UK. Digital galleries can be seen and prints can be purchased at magnushastings.com.