In commemoration of 2020 PRIDE MONTH, independent radio station KPFK 90.7 FM and “The Blunt Post with Vic” show are proud to announce a new partnership with the Stonewall Democratic Club, the nation’s oldest LGBTQ+ and feminist political group, advocating for progressive issues since 1975.

In collaboration, the organizations are producing “PrideCast LIVE,” an 11-hour marathon, on Saturday, June 27, from 10 a.m. to 9 p.m. in solidarity with Global Pride and Black Lives Matter. The daylong program will air live on KPFK 90.7 FM and livestream on KPFK.org.

For the special program, KPFK is transforming its logo and creating custom on-air content commemorating Pride and standing in solidarity with the Black community. Between the three collaborators, this broadcast will feature Pride-themed shows, exclusive interviews with leading politicians, Queer activists, and other high-profile public figures, artist spotlights, and a variety of fresh editorial.

“KPFK Los Angeles is proud to celebrate Pride Day with support from the Stonewall Democratic Club on Global Pride Day. We are committed to the communities we serve to provide news, information, stories, music, culture, and the arts. Please help us remain fearless by supporting us at KPFK.org,” said Kevin Fleming, KPFK program director.

The marathon will feature a variety of diverse shows by KPFK programmers, members of the Stonewall Democratic Club, and radio hosts from the community. Vic Gerami, the host of “The Blunt Post with Vic,” will produce and emcee the event. He will also host the marathon’s opening show.

“This is my third and most important year producing KPFK’s Pride program, especially due to the recent murder of George Floyd and many other Black Americans who were victims of police brutality caused by institutionalized and systematic anti-Black racism. Pride 2020 is not Pride as usual; it is not a celebration, especially with our nation in turmoil while our president has declared war on Americans. With the current situation and an ongoing COVID-19 crisis, Pride 2020 is about solidarity with Black Americans and all other marginalized minorities. We will show the true meaning of pride on this 50th anniversary of LA Pride —resistance, activism, and resilience, along with our collaboration with the Stonewall Democratic Club,” said Gerami.

He added, “It is a natural fit for a station that is known as ‘radio powered by the people’ to partner with the country’s leading LGBTQIA+ political advocacy organization for this historic pride program. ‘The Blunt Post with Vic’ is proud to be a producing partner and bring a lineup of exciting and relevant shows covering pressing currents events.”

“The entire Stonewall team is thrilled to take both pride and political action to the Los Angeles airwaves!” said Ryan Basham, communications vice president of the Stonewall Democratic Club. “We’re hard at work collaborating with Vic Gerami and KPFK on exciting, fun, and engaging programming that will help make this year’s Pride truly special.”

Stonewall President Lester Aponte said, “KPFK has been the standard bearer of quality radio programming in Los Angeles and has been instrumental in magnifying LGBT voices for decades. We’re proud to partner with KPFK and ‘The Blunt Post with Vic’ on what will surely be a one-of-a-kind event.” 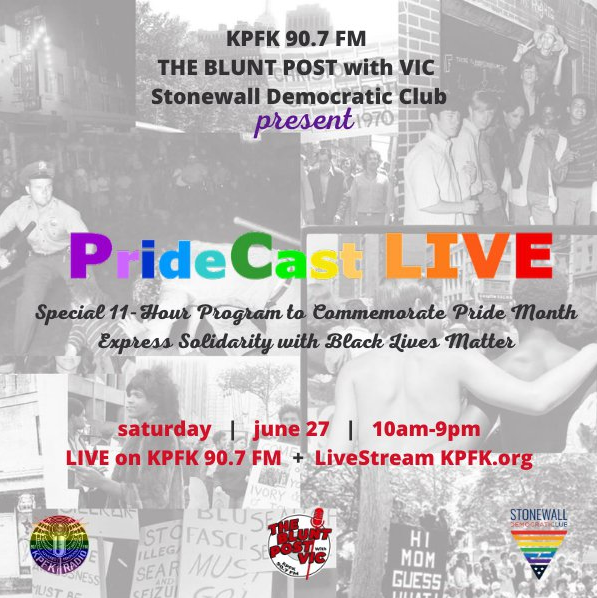 KPFK has been broadcasting since 1959 over 110,000 watts, the strongest signal west of the Mississippi. KPFK continues to produce the majority of programs in-house giving it the flexibility to provide a platform for stories, news, music, and information to serve the cultural welfare of the communities in and around Southern California that you will not hear anywhere else. KPFK believes forging social change is a fundamental part of how radio can make a positive impact on communities. KPFK.org

“The Blunt Post with Vic,” with host Vic Gerami, is a prime-time national breaking and headline news program that airs live on KPFK 90.7 FM on Mondays, at 7 a.m. (PST). The show also offers analysis and commentary about national headlines, politics, and current events. Gerami interviews a member of Congress and other high-profile public figures on each show and highlights a benevolent organization, such as a charity, a social justice cause, or an exceptional changemaker in the community. TheBluntPostWithVic.com

The Stonewall Democratic Club is the nation’s oldest LGBTQ+ and feminist political group. Since its founding in Los Angeles in 1975, Stonewall has been the home for progressive LGBTQ+ Democrats as well as straight allies.

Stonewall is committed to achieving equality for all by advancing progressive and feminist values at local, state, and national levels. Stonewall is an all-volunteer, grassroots, nonprofit political organization and is among the largest Democratic clubs in California. Stonewall has inspired the formation of dozens of sibling organizations across the country and is a leading voice for LGBTQ+, feminist, and progressive issues both locally and nationally.

Stonewall membership is open to all Democrats, regardless of sexual orientation or gender identity. Join at StonewallDems.org 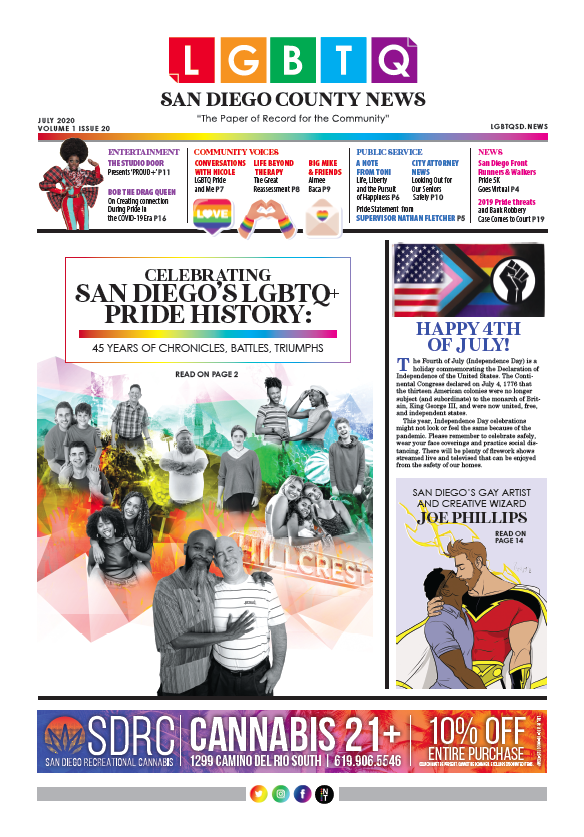