‘I know things that no self-respecting person should know!’

You might recognize the handsome face from the 2009 film “Oy Vey! My Son Is Gay!!” And you should definitely recognize the angelic voice from the “Jersey Boys” musical and 2014 film adaptation directed by Clint Eastwood, but there is so much more to John Lloyd Young. 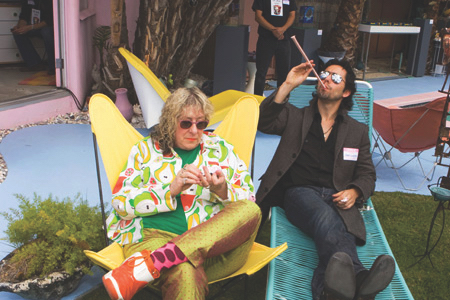 He is an award-winning actor, singer and artist. He does extensive charity work for many nonprofits including Broadway Cares/Equity Fights AIDS, AIDS Project Los Angeles (APLA), and the USO. He is a practicing student of Chinese Chan Buddhism and prides himself on the ability to write in Chinese. As a matter of fact, I recently interrupted his usual meditation time to do a Q&A and play the name game and he was happy to humor me. I found him to be kind, smart, political and very witty!

JPS: You were born in Sacramento; do you ever get back there?

JLY: I was born in Sacramento on Mather Air Force Base, which is now a VA Medical Center and I have been back there on sort of a pilgrimage. I’ve hung out there with a bunch of veterans and “shot the shit” with them outside of, to me, was only a building in a baby picture. My passport says I was born in Sacramento and I live in California now so as far as I’m concerned, I’ve always been a Californian.

JPS: Besides music and acting, you create visual art — can you tell me about that? 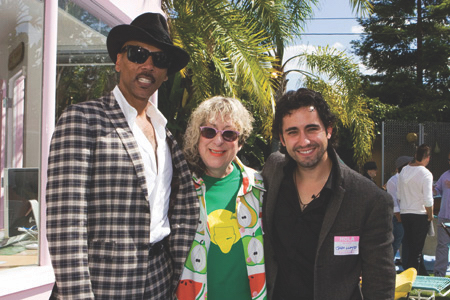 JLY: Yep! I was always a museum hound and fan of pop art as well as Arte Povera and the 1960s art movement; and also what I found out later was a Los Angeles movement, which was the Assemblage Movement. I was out in a museum one day and I got an idea, an idea that I hadn’t seen anyone else do, which was to bling out groceries and put them under museum glass and it turned into a whole art career, my stuff, you might be surprised to know, is very popular in Boca! (laughs). After I did that first expression, a friend of mine who recently passed away, a brilliant and amazing woman, actually a radical queer leader I would think — Allee Willis, whose alter ego was “Bubbles the artist” — had a house in Valley Village (near Studio City in Los Angeles) that was like “Pee-Wee’s Playhouse.” It was amazing inside, she called it the Allee Willis Museum of Kitsch and she and I knew each other from when “The Color Purple” first opened on Broadway; she was one of the writers of that adaptation, she wrote the “Friends” theme, she wrote songs for Earth, Wind & Fire, and when I had a body of work ready to go, she gave me my art opening at her house and we did it as a benefit for APLA. It was a great, RuPaul was there, we had all this blinged-out junk-food boxes under museum glass and near each display, we had the actual food you could eat — so next to the Oreos blinged-out display, we had a big bowl of Oreos; it was kitsch to the max! That’s how I first started and then later down the line, I started doing Society Portraits during the Obama years. They were Campbell’s soup cans, all blinged out with a figure of a person on them instead of a soup flavor. Now with the help of a friend, I’m doing Starbucks cups, during the Trump era, that aren’t blinged out. Adam Schiff, Nancy Pelosi, and Michael Feinstein all have one, basically friends and people that I’m acquainted with, I’ve been creating these portraits of them, which is what I’ve been doing lately. But it all started with “Liberace’s Grocery Aisle.” I spent five years mostly doing art, I have an inventory of my artwork so I could do another art showing anytime but I’ve been so busy doing concerts. My artwork isn’t in any galleries right now, but I will randomly post some of my pieces on my website and sell some of it there or through a network of friends.

JPS: What is one message you would give to your fans?

JLY: That eventually, if they just keep coming to the shows, we’ll get plenty of time to visit whether there’s a meet-and-greet or not, I promise. My shows are very personal, eventually we’ll feel like we’ve hung out and had a few beers together.

JPS: What is the most useless talent you have?

JLY: (Long pause) Trivia, Broadway trivia. I know things that no self-respecting person should know. For example: I know the creators of “Hair” were writing a show set in space called “Via Galactica,” but its original title was “Up!,” the show was to be at the Uris Theatre on Broadway but the marquee would have read “Up! Uris,” so they had to change the name of the show. I guess that’s not entirely useless because it’s funny. 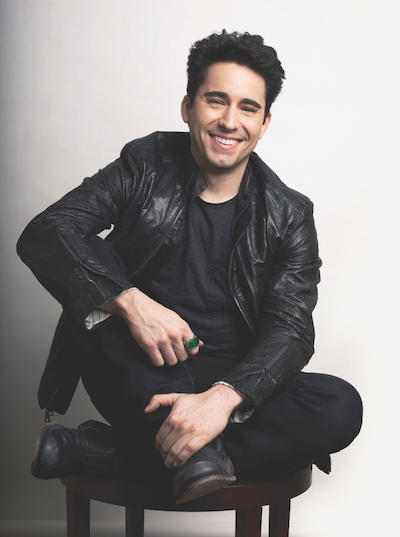 JLY: Yes, I am, as a matter fact, my meditation cushion is right here but I’ve been supplanted by my dog who is asleep on it right now. I’m very into it, here in Los Angeles there are something like 300,000 Chinese speakers so not only do I practice the Chan Buddhism but I’ve been learning and speaking Chinese and I can also write Chinese really well, and read a bit of it, too. It’s really good for my OCD. If you look at my artwork and see how intricate it is, it’s probably not too far a stretch to say that I’d be good at Chinese calligraphy and writing it is my favorite part of learning the language.

JPS: Practicing Buddhism takes a lot of discipline doesn’t it?

JLY: The discipline is backwards from what you would think though; the discipline part is letting shit go! The hardest part is to not overthink things, just clear your mind so like it’s calm water, that, for an American person is nearly impossible but when I get close to it, it really is refreshing, like drinking a cold glass of water. It’s a great feeling to unload and we all need to do that.

JPS: What would you be doing right now if you weren’t a performer?

JLY: I’d still be performing, in a court room or in politics or even a professor. I’d still be up in front of people. In another lifetime, I was probably clergy, only because I like bringing a room together in a spiritual way, which is sort of what singing is like. But I don’t like dogma or preaching to people and I wouldn’t like the celibacy part of being clergy. I think most politicians are actors but the scripts are pretty dull in politics and they’re much more varied in theater and the performing arts.

JPS: How do you think the internet has impacted the music business?

JLY: I think it’s totally gutted it! There are people who used to be the kings of the music business who don’t want to go anywhere near it now because they can’t make any money anymore. There are just a tiny handful of people making money and there are people who are trying to fix that because it is bewildering.

JPS: What is your favorite song to perform? 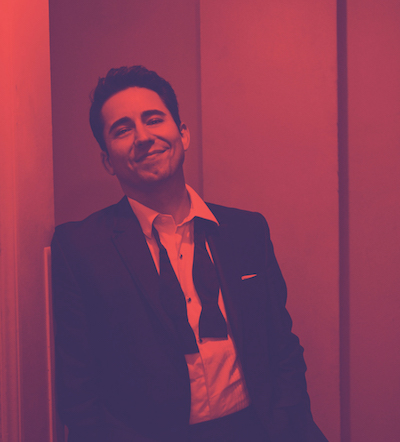 JLY: It changes, it’s seasonal, songs come in and out. I think the one that’s always soul-fulfilling to sing and always goes over well is “Unchained Melody.”

JPS: Which famous musicians do you admire?

JPS: What is the most trouble you’ve ever gotten into?

JLY: I was very alarmed when I saw what was a real viable Trump candidacy, so I started using the F word a lot on social media even before Robert DeNiro started saying “F— Trump” and I got a lot of side eye from Michelle Obama and others I was supposed to be representing; I didn’t do what Michelle Obama said, they went low and I didn’t go high. I was really alarmed. I was working with kids and I didn’t want those kids to have a president that acted like that so I was really alarmed and kind of went off a little bit. Flash forward all these years later and former National Security Advisor Susan Rice, as part of the “they go low, we go high” circle recently called Lindsey Graham a piece of shit and told Snoop Dogg to back the f— off of Gayle King! So I guess they’ve caught up with my language all these years later.

JPS: What is the best advice you’ve been given?

JLY: Live beneath your means, especially in my business, because you never know what’s going to happen.

JPS: If you could change anything about the entertainment industry as a whole, what would it be?

JLY: It just changed today with guilty verdicts of Harvey Weinstein. That’s what I would have changed years and years ago. The abuse of artists just because we decide to put ourselves in front of the audience is appalling.

JPS: You were appointed by President Barack Obama and sworn in to the Committee on the Arts and Humanities in 2013 and then you resigned in 2017, co-signing a letter referencing Trump’s hateful rhetoric; what message were you sending and do you think your message was heard or fell on deaf ears?

JLY: Being an artist in the era of Trump is a really good time to develop things because even if you had the biggest success of your career right now, it would be buried under seven Trump headlines. This is the perfect time to work under the radar because he just sucks all the air out of the room. At the time we all resigned from the committee, that story ran four days straight in the news, which was a big deal considering that hardly happens with anything anymore. We were the first group to resign en masse from him. I am proud to have joined people who were standing up against that rhetoric especially because I was working with kids in schools. I still believe that regardless what is achieved, abusive language has no place in the presidential office.

JPS: You’ve performed at Martinis Above Fourth a few times now, what brings you back? 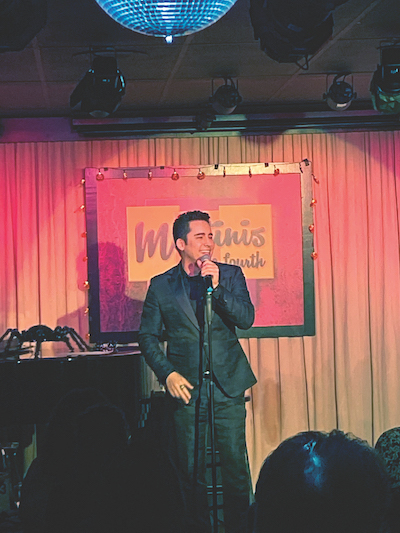 JLY: The management is great to us, the place is fantastic, we always have a great crowd to play to and I love San Diego. If anybody is willing to get off the internet, turn off their Netflix, and physically come out to see me perform, I consider them a friend. They are supporting an artist performing live and they don’t have to, they can easily stay home, order a pizza and do some binge watching.

JPS: Do you want to play the name game? Just say the first thing that comes to your mind.

You have a Grammy and a Tony, any interest in winning an EGOT? – I’ve learned that I can’t take my Tony award to the store and buy groceries with it so although awards are nice and I would never reject one, I’d rather have a full house and a steady career.

John Lloyd Young and his acoustic style of ‘50s and ‘60s rock n’ roll, R&B and doo wop will be returning to Martinis Above Fourth on Thursday, March 19, at 8 p.m., visit ma4sd.com for tickets. You can also take his angelic voice with you by purchasing his debut album “My Turn.”

Work out smarter, not harder