‘Fly’ at the La Jolla Playhouse

It’s all about Wendy in the newest version of the story about the boy who wouldn’t grow up now playing at La Jolla Playhouse. “Fly” is based on the book “Peter and Wendy,” written by J.M. Barrie, who created the classic Peter Pan character. 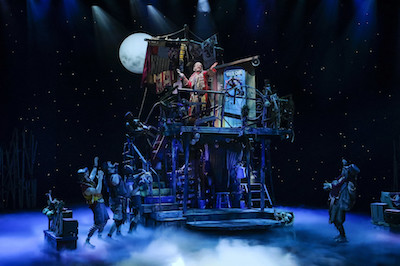 The new musical fantasy is directed by Jeffrey Seller. You’ll recognize his work. Seller is the Tony Award-winning producer of Broadway blockbusters that include “Hamilton,” “In the Heights,” “Avenue Q,” and the cultural phenomenon and 1996 Pulitzer Prize-winning musical “Rent.”

Although “Fly” had its first incarnation and flight in 2013 at the Dallas Theater Center, it has been revamped and rebirthed for a La Jolla run that could eventually take it to Broadway. Seller has a strong supporter in another Tony Award winner, Christopher Ashley, artistic director at the Playhouse. Ashley is also a big fan of the Barrie book and excited to have one of his childhood favorites reimagined on stage and above it. “For starters, ‘Fly’ reconceives it as Wendy’s story, and reinvents Neverland as a breathing, visceral, living entity thrumming with danger and possibility,” Ashley says. “In doing so, a story about the tension between staying young and growing up adds a narrative dimension of our responsibility to care for those around us.” 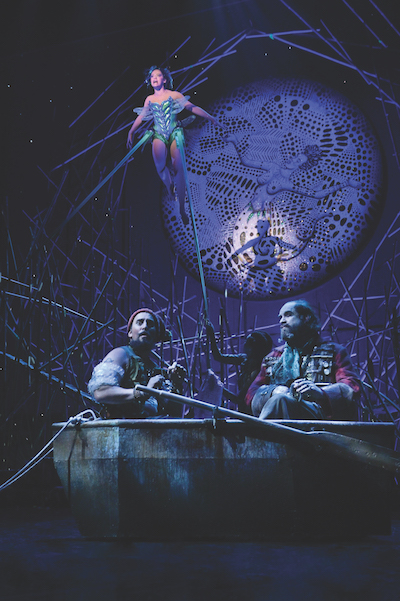 The dynamic Storm Lever returns to the La Jolla stage as Wendy in this production. Lever is known to audiences here playing Duckling Donna/Mimi in the world premiere of “Summer: The Donna Summer Musical,” which continued to Broadway. In “Fly,” Wendy is seduced by the mysteries of Neverland and struggles with her own impending womanhood. That’s the focus of this version of the story that still delivers up-tempo choreography, sword fights and a percussive score highlighted by tribal drumbeats. “Fly” is visually stimulating and appropriate for children looking to create their first-time memories of this classic adventure. “This is a truly extraordinary company – a wonderful mix of Broadway veterans, Playhouse newcomers and local artists, and I can’t wait to watch their collective talents light up the Weiss stage in this enchanting new musical,” Ashley continues.  He then points out the first paragraph of the 1911 novel that he says truly tells the story and inspiration of “Fly.”

“All children, except one, grow up. They soon know that they will grow up, and the way Wendy knew was this. One day when she was 2 years old, she was playing in a garden, and she plucked another flower and ran with it to her mother. I suppose she must have looked rather delightful, for Mrs. Darling put her hand to her heart and cried, ‘Oh, why can’t you remain like this forever!’ That was all that passed between them on the subject, but henceforth Wendy knew that she must grow up. You always know after you are 2. Two is the beginning of the end.” — by J.M. Barrie. “Peter and Wendy,” chapter one.

Todos Cambiamos (We all Change)