An openly gay president, the subject of local author’s work of fiction

With an openly gay married man currently running for president it brings the question of what his husband might be called if he were elected. This is not the first time this question has arisen. The same happened when there was the possibility of President Bill Clinton serving in the White House as the spouse of Hillary Clinton.

Local author JR Strayve Jr. realized while this was in discussion and many names titles surfaced throughout the discussion, but First Spouse is the one that stuck with him and he wondered, what if the couple were both men? So he began writing. After Pete Buttigieg (South Bend, Indiana mayor and Democratic presidential candidate) announced that he was going to do his exploratory committee for president, Strayve knew that his book needed to be finished. He published his new fiction novel “First Spouse of the United States: Star Athlete & War Hero Battles Societal Boundaries and Washington Elite” three weeks before Buttigieg declared his candidacy for president. 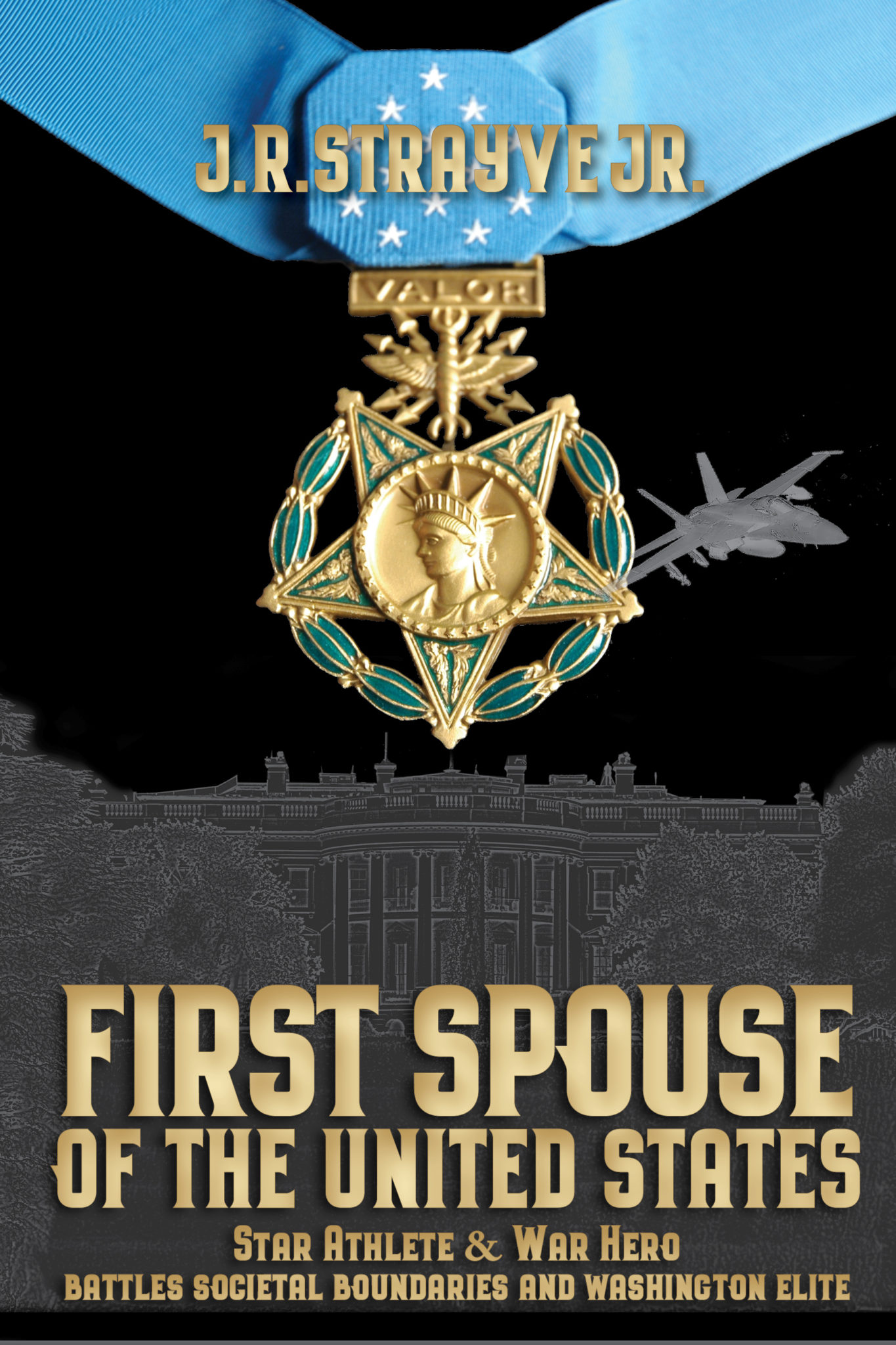 At a book signing at Comickaze Comics Books and More at Liberty Station-Barracks 15 on Aug. 2, Strayve provided some more insight on his latest creation.

“First of all, the book is fiction,” Strayve said. “People ask me if that is happening now and I say, ‘maybe.’”

The novel starts with Rocky, the protagonist, and is set in the mid-80s. He is a football player in high school, a very good student, and his name is Ricardo Chambers.

“Rocky gets into a challenge, sidetracked by sexuality in high school and that doesn’t go very well,” Strayve said. “So, he decides to get out of Southern California. Fortunately, because of his academics and family connections he’s accepted to the Naval Academy. So, he goes to the Naval Academy, ends up playing football there and he meets another guy Nick. Long story short, Nick becomes a JAG officer when he graduated two years before Rocky and later Rocky becomes a Marine fighter pilot and an ace in the Iraqi War. Fast forward decades later they get married, and then fast forward a little bit more and one of them (?) is elected president of the United States.”

Strayve said this was a page turner, and he was correct. In the first chapter, you meet a war hero receiving commendations for his heroism from the president. But beneath the staunch Marine Corps fighter pilot, there is an intimate look at the closeted man inside whose biggest fear at that time is anyone finding out about his true sexual identity. Dialogue is absorbing, creating a sense to know more about Rocky, how he got there and if he will ever be comfortable with identifying as his true self. The book covers years of Rocky’s life beginning with his high school days.

“A lot of people seem intrigued about the idea and the concept,” Strayve said. “It catches a lot of people off guard. The whole concept has people wondering where the book is going to go. When people start reading the book just because it is a good book, they’ll find that it really is a good story. There is much, much more to this story. It’s a spotlight on authenticity.”

Strayve said when people grow up in their lives hiding something or having to hide who they are, for whatever reason, he believes that their lives are diminished by hiding.

“I know you are, because I did firsthand,” Strayve said. “You don’t grow as well and as healthy physiologically when you are hiding. I know. My whole life I was afraid that someone was going to discover my secret. You just do not flourish, and I said to myself, stop that. In the book it is a lot like that. Live authentically or whither.”

Strayve said he hopes to lay the groundwork for people to live on their own terms and not living other people’s expectations. “Go full boar, not just be authentic, you have to have character. You have to be honest and when you are you should be treated that way,” he said.

There is a sequel in the making, but Strayve won’t say much without giving away the story. He tells people not to read the end of this book because it will destroy the book for you.

“Everyone who reads the book, and the ending, say that it is not what they expected,” Strayve said. “Some are ticked off and some are asking where is the sequel? I’m three chapters into it and it is going very well. I hope to have the sequel out the first or second quarter of next year. It won’t take me long to write it because I know where I am going with it and it’s a lot of fun.”

Strayve’s father was a military fighter pilot and one of the places he lived when he was 4 and 5 was in Coronado. His father was assigned to an aircraft carrier that was there at the time and that was before the Coronado Bridge.

“We used to take the ferry over. It was a pretty neat place to live,” he said. “When you are a military brat, you get moved around a lot. I went to nine schools before I went to college anywhere between Hawaii and Rhode Island. Then I went to Florida State and majored in ‘party’ and I had to change majors, so I enlisted in the Marine Corps.”

One of the reasons Strayve said he enlisted in the Marine Corps, was first, he felt it was the hardest and he had some issues going on in his life with his own sexuality.

“I wasn’t out, and I wanted to prove to myself that I was a man, so I went into the Marine Corps,” Strayve said. “I went in as a private, spent time in the HMX-1 Presidential Helicopter Squadron, and made sergeant. Later I went to officer’s candidate school and became a communications officer spending time at Guantanamo, Korea, Japan and other areas.”

In the meantime, Strayve married, and had three children. He was married for 30 years.

“It was a great marriage and a very healthy marriage,” he said. “I was transparent about who I was. The kids went off to college and my wife and I decided that it was time for me to live my authentic life. We remain very close.”

Strayve works in financial planning since he got out of the Marine Corps in 1985 and moved back to San Diego in November 2000.

He is not only working on the sequel to “First Spouse” as he is in the final heaving editing process of an international epic novel that takes place between 1860 and 1960 and broken into two books, “Braxton’s History” volumes 1 and 2.

“Braxton’s History” is LGBT related,” Strayve said. “Many of the characters in the book are diverse. But you have to remember that this takes place in the 19th and 20th centuries when these things were not acceptable. And there are different cultures. It starts out in 1860’s England and I have a fictitious Prince of Whales that’s his third son. I’ve wiped out the Victorians, but it parallels all of the significant things during that time. It’s placed in London, Paris, Spain, Germany, Korea, Russia, Japan, Hong Kong, India, the United States and on and on it goes. The characters are living real lives in spite of their sexuality. I think people will be surprised about their lives and how they deal with it.”

“First Spouse of the United States” is now available at Amazon, Kindle and Barnes & Noble.

As a reader, I just mentioned the first chapter. I’m still reading and it’s a wonderful novel that many LGBT people can relate to and can provide some wonderful insight for those who have never had to hide their sexual identity. Strayve was right in calling this book a page turner and its timing is impeccable.

“I did send Buttigieg the book, I wrote a nice letter, and autographed the book,” Strayve said. “Now it is his turn when holding one of the debates to step up and say, ‘Buy this book.’”