Since founding Cinema 175, launching “Is It Just Me,” “eCupid” and “The 10 Year Plan,” writer, director and producer JC Calciano created the sitcom web comedy sketch series “Steam Room Stories” in 2010. Now, this YouTube web series has more than 100,000 subscribers and more than 54 million views. With the success of the series, Calciano released “Steam Room Stories: The Movie” that will be premiered by FilmOut San Diego at Landmark Theatres Hillcrest Cinemas on Sept. 18 at 7 p.m.

In writing his fourth romantic comedy, Calciano said he thought that the script was “fine” and after talking with his husband who question his excitement about the script, he said that if he could do anything he would turn “Steam Room Stories” into a movie. “That’s when the writing began,” he said.

“Steam Room Stories: The Movie” follows the Steam Room Guys as they try to save the steam room from failing cosmetic giant Sally Fay, played by Traci Lords, after she spends all her empire’s money trying to take over the steam room in Encino, California, which she believes sits on top of a magical fountain that will bring her cosmetic future to a grand scale.

Lords said when she read the script, she loved the fact that Sally Fay is a “Deliciously wicked woman.” As a fan of the original YouTube series, she said she was “tickled to be part of this cheeky film.” 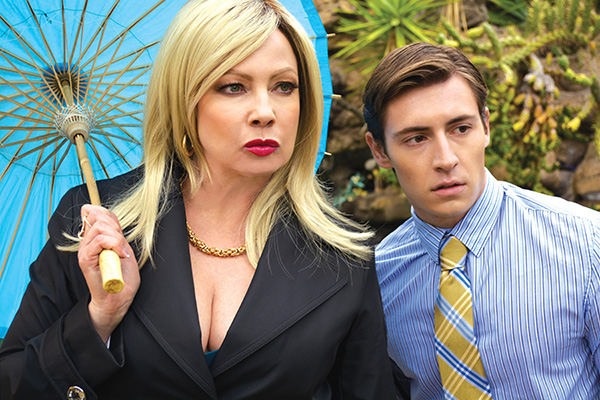 “JC wrote a boss lady character with a sharp tongue and a desperate streak,” Lords said. “I love how passionate Sally Fay is. She’s an emotional tornado!”

Filmed in only 14 days, Lords said Calciano and the entire cast were terrific to work with.

“The energy on the set was uproarious and the fact that JC and many of the actors in the film had worked together on the original series helped us to fall quickly into sync,” Lords said. “I love that JC created characters that love without barriers. JC gave me a lot of freedom to play with Sally’s emotional journey and I have some of the best lines in the movie. It was a dream bad girl role! If you’re in the mood for a laugh look no further!”

With more than 60 actors in the near 10-year series, in the movie half the actors are new and half are reoccurring actors from the series. In the original script, the villain was written for a much older actress, but Calciano said that after his casting director showed the script to Lords, Calciano said he was such a fan that he rewrote the script just for her. 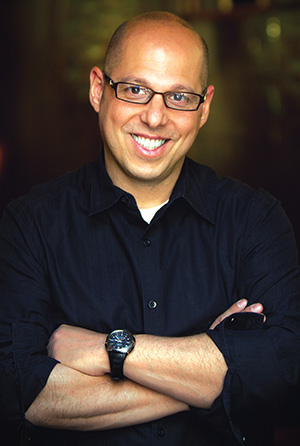 “It’s really wonderful funny campy fun and it is my homage to the 80s movies,” Calciano said. “When I was growing up, I loved those fantastic old movies like ‘Mannequin’ and ‘Electric Dreams,’ ‘Real Genius’ and all those crazy, silly fun, suspension of disbelief, just enjoy yourself kind of movies. So, it’s kind of has that 80s nostalgia. One of my favorite comedy writers is Mel Brooks, so I have Mel Brooks style. I blended those two genres. If I could ever bring anything back for a fun time, that would be it.”

For the San Diego premier, Calciano will be accompanied by Lords, and “Steam Room” actors Jacob Buckenmyer, Eric D’Agostino and Forrest Hoffman for a Q&A session immediately following the screening.

“They are so much fun,” Calciano said. “People ask me if I cast only because they are amazing looking guys, but I actually cast them based on their personalities. Number one, they have to be nice guys who are fun to be around and exude joy and are happy people. If they can act and they are great looking that’s always terrific. Having traveled with Traci and those guys it is so super fun and we all have such a great time together.”

Calciano said this movie is more about sexual fluidity, as are the new “Steam Room Stories’” episodes. One of the things he found on the festival circuit from his last three films was that fans felt like the bi and fluid community were underrepresented.

Calciano said that gender fluidity is a learning experience most people in all communities.

“As long as we address the fact that we are all learning every day about sexuality and what makes people up we find the things we share in common,” Calciano said. “We have to accept the fact that we are all learning, and we have to be more tolerant with the people that are trying and might not be getting the verbiage right. I’m 55 years old and a lot of my actors are in their 20s and they are constantly teaching me new terminology and what we are learning about sexuality.”

“As with all my movies, I try to have a strong theme,” Calciano contnued. “Even in this them there is the importance of community and self-love and being kind and loving each other. There is always that message in all of my films and I hope people to walk away with not only feeling good about who you are, but also, you have had over an hour and a half of pure silly entertainment. I do this because I enjoy making the audience happy. I’m nothing more than a storyteller.”

Calciano said the movie is for sale (DVD) on Amazon but what he would like to bring attention to is that there are two DVDs coming out. One does, and one does not have the CinemaScent with the scratch and sniff cards.

At the FilmOut San Diego showing, the film screening will include CinemaScent. To purchase tickets, visit filmoutsandiego.com.

For more information about purchases and platforms to see “Steam Room Stories: The Movie,” visit steamroomstories.com/movie.