Corporate Pride: Support Businesses That Support and Advocate for Us

It seems like you see them every summer: memes shared on social media poking fun at corporations that support the LGBTQ+ community. It has almost become trendy to make jokes about businesses identifying themselves as pro-LGBTQ+ for the month of June. Companies rainbow-ify their corporate logos, place ads in community newspapers and magazines, and go to great lengths to be perceived as friendly to LGBTQ+ customers. Public opinion has shifted over the past few years so that more brands are comfortable aligning themselves with the LGBTQ+ community.

Exposure and representation matter, so it is usually positive when ads and commercials include LGBTQ+ people. But to be clear, including Gay people in marketing or selling to Gay consumers is not the same as supporting the LGBTQ+ community. With so much saturation, are the businesses really standing in solidarity with LGBTQ+ causes or are they just opportunistically trying to make a buck? 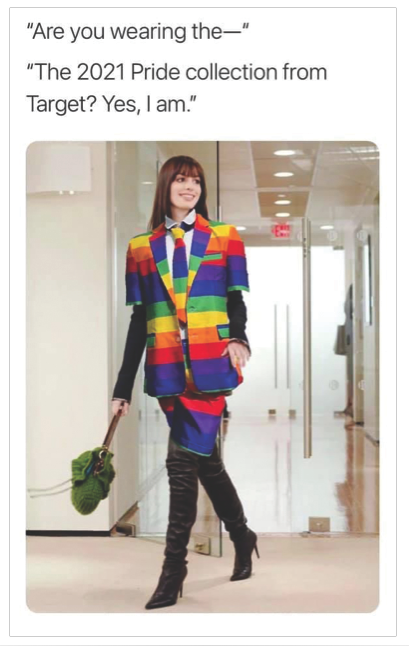 At this time of year specifically, many companies sell products designed to cater to the LGBTQ+ buyer. You will find unicorn graphics on clothing, glitter on home goods, and rainbow colors on food and beverage items. A portion of the sale of many Pride-themed products gets donated to LGBTQ+ charities so buying these Gay-themed products can add up to significant donations each year. Better than donating a portion of sales on certain products, many corporations donate set dollar amounts that are not conditioned on any Pride-themed promotions. The Gay & Lesbian Alliance Against Defamation (GLAAD); the Gay, Lesbian & Straight Education Network (GLSEN); the Trevor Project; and dozens of other national nonprofit organizations receive funding from corporate grants. These organizations help our community in so many different ways, but they all depend on corporate sponsorship to operate.

Absolut, the Swedish vodka brand, started advocating for the LGBTQ+ community in 1981 and began advertising directly to the community in the same year. Absolut is a founding member of the GLAAD Media Awards, sponsors no less than three LGBTQ film festivals, and was one of the original backers of “RuPaul’s Drag Race.” The company claims to have donated more than $40 million to LGBTQ+ causes including OUTserve, OUTFEST, and God’s Love We Deliver.

Starbucks began offering full health benefits for same-sex partnerships in 1988. The company’s LGBTQ+ resource group was founded in 1996 and the company marched in its first Pride parade in 1998. The company created a support system for Transgender staff in 2007 and began covering gender reassignment surgery in 2013. The company filed briefs with the Supreme Court in opposition to the Defense of Marriage Act in 2013.

Wells Fargo began offering benefits to same-sex partners in 1988. The bank created an LGBTQ resource group for employees in 1992. The bank was the first financial institution to join the National Gay & Lesbian Chamber of Commerce and actively seeks out LGBTQ-owned businesses as vendors and suppliers. Long before Gay marriage was legal, the bank was focused on financial planning for LGBTQ+ partnerships.

Ben & Jerry’s is said to be the first company in the state of Vermont to offer full health benefits for same-sex partnerships in 1989. The company awarded grants to PFLAG as early as 1996, filed court briefs to support the Employment Non-Discrimination Act in 2001, and filed court briefs to support marriage equality in 2015. The ice-cream brand renamed Chubby Hubby ice cream to Hubby Hubby when marriage equality became law in Vermont in 2009 and created a new cookie dough flavored ice cream called “I Dough, I Dough” when marriage equality became law across the country in 2015; proceeds from those sales were donated to the HRC. The multinational brand created other commemorative flavors to celebrate marriage equality in the UK, Australia, and Ireland.

Levi Strauss & Co. began offering full health benefits for same-sex partnerships in 1992. The denim company filed briefs with the Supreme Court in favor of same-sex marriage as early as 2007 and was one of the first businesses to endorse the original Equality Act in 2015. The multinational corporation promotes LGBTQ+ rights in countries as varied as Russia and India.

Skyy, the American vodka brand, has been supporting the LGBTQ+ community since its inception in 1992 and its first ads specifically targeting LGBTQ+ customers ran in 1995. Skyy has been the title sponsor of the NYC and LA Pride festivals, was one of the original backers of the television program “Transparent,” and has funded dozens of LGBTQ+ nonprofits. Before marriage equality was legal, Skyy spent years working with Freedom to Marry and, more recently, has been working with the National Black Justice Coalition to draw attention to the Black Trans community.

Stolichnaya, the Latvian vodka brand, began supporting the LGBTQ+ community in the early 1990s. The company created the “Be Real: Stories from Queer America” documentary series in 2006 to profile the lives of LGBTQ+ people outside big cities. Stoli created the national bartending competition for LGBTQ+ bartenders, sponsors at least 30 community organizations, and has been the title sponsor for dozens of Pride festivals nationwide and internationally.

Subaru began marketing to and advocating for the LGBTQ+ community in 1996. Martina Navratilova became a spokesman for the brand 25 years ago. The car manufacturer gained accolades for the subtle Gay messaging in their marketing.

Being surrounded by so many corporations catering to the LGBTQ+ community, it may be easy to forget how many corporations still oppose our community even in 2021. Although corporations can no longer legally discriminate against LGBTQ+ employees, certain corporations still do not lift up their LGBTQ+ employees. Worse, certain companies fund organizations and politicians that are demonstrably harmful to the LGBTQ+ community. The chicken sandwich restaurant, the craft supply store, and the Italian fashion brand are obvious examples, but many other businesses are just as detrimental even if they are less prominent.

AMC Theaters earns a perfect score but Regal Entertainment only earns a 60.

Arco, Chevron, and Shell all earn perfect scores but Valero only earns a 60.

Cox earns a perfect score but DISH Network only earns a 20.

Hilton, Marriott, and Wyndham earn perfect scores but Loews only earns a 55.

Walgreens earns a perfect score, CVS earns a 90, but Rite Aid only earns a 50.

There are many examples of corporations surveyed by the CEI that improved from low scores years ago to high scores today. LGBTQ+ political pressure and economic force helped shape some of these businesses in positive ways. Corporate cultures can evolve and some companies that were not initially supportive of the LGBTQ+ community are supportive now. We should support those businesses that have made the changes to do better.

Target gave a large donation to a staunchly anti-Gay candidate for Minnesota governor in 2010. The blowback from the donation was swift. Target eventually changed course, launching the Take Pride campaign in 2012. The company vocally supported marriage equality in 2014 and added gender-inclusive restrooms to their stores in 2016. Target shifted from alienating their LGBTQ+ employees and customers to embracing them.

During a radio interview in 2013, the CEO of Italian pasta company Barilla asked LGBTQ+ customers not to buy Barilla pasta. Global outrage followed with universities and restaurants refusing to buy the brand and social media influencers publicly shunning the company. The company immediately went to work repairing some of the damage caused by the CEO’s statement. The corporation hired a diversity officer, created an LGBTQ+ resource group, expanded health benefits to Transgender workers, and began donating to organizations to help LGBTQ+ youth. In a single year, the pasta company went from earning a zero score on the HRC’s CEI to earning a perfect score. Barilla now markets to the LGBTQ+ community.

Not that long ago, being LGBTQ+ was a crime. People in our community attended secret meetings or read underground magazines just to find each other. Thankfully most of the LGBTQ+ community in the United States no longer has to live that way today. Pride season reminds us of how the LGBTQ+ community came together to demand what we wanted and what we deserved. Vocal allies including family members, politicians, and even corporations have all shared in that progress.

The expansion of LGBTQ+ rights and general acceptance would not have been as swift without corporate support. For the “Bostock” and “Altitude Express” Supreme Court cases decided in 2020, over 200 major corporations advocated that sexual orientation and gender identity should be safe from discrimination. In the 2014 “Obergefell” Supreme Court case, 379 corporations made the case for legalizing same-sex marriage. The corporate endorsements certainly helped undercut any arguments from the opposition that businesses preferred discrimination and opposed equality.

Some companies made mistakes when they attempted to initially reach out to the LGBTQ+ community. Not all LGBTQ+ representation has been flattering or positive over the years. No corporation gets everything correct all of the time. Support from the LGBTQ+ community has never been unconditional, nor should it ever be. LGBTQ+ consumers must be vigilant and hold all corporations accountable, even those businesses that support the LGBTQ+ community the loudest. When corporations choose the wrong path, we should make our dissatisfaction known and urge prompt corrective actions. But chastising the corporations for their support can seem unthankful, ungrateful, or unappreciative. The jokes on social media minimize a lot of good that some of these companies have been doing, long before supporting the LGBTQ+ community was as popular or commonplace as it is today. Implying that corporate support of the LGBTQ+ community is something new minimizes decades of advocacy on our behalf.

We should support the businesses that support and advocate for us.

Creep of the Week: Tony Perkins