(l to r) Mike (Michael Louis Cusimano) and Will (Shaun Tuazon) find first love in their love of music. (Photos by Daren Scott)

“Girlfriend” is an intimate look into first love, exploring the awkwardness, excitement, wonderment and fear in this coming of age, and out of the closet love story. Set in a small town in Nebraska in a time before texting and social media, this enchanting musical romantic comedy brings back the human component with mesmerizing storytelling. It is intrinsically beautiful in its simplicity. With only two actors and a kickass band, this play is a theatrical masterpiece.

It’s 1993, and Mike (Michael Louis Cusimano) and Will (Shaun Tuazon), just graduated high school. Polar opposites in nature, they share one thing in common — the love of music.

Mike is an all manly jock terrified of exploring his sexual identity and his attraction to Will. He reaches out to Will with his newest cassette mixtape and begins phone calls, spending time with him, keeping the blooming relationship as secretive as possible in a small town during the summer. This contrasting pairing creates a universe where the two fumble their way through the fearful delicate process of self-exploration. 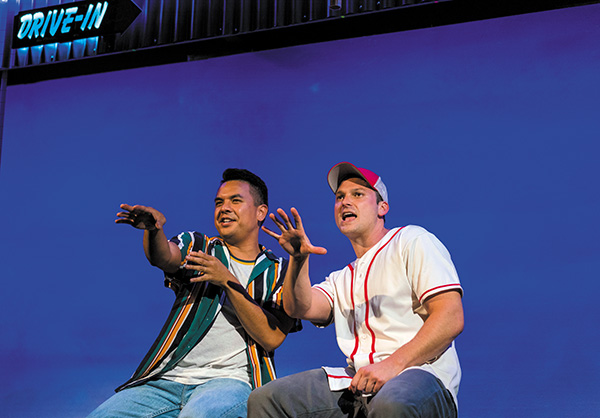 Cusimano and Tuazon are a perfect match and the chemistry between the two propelled this story in every component of stage production. Dialogue and physical interactions were as harmonious and engaging as their vocals. 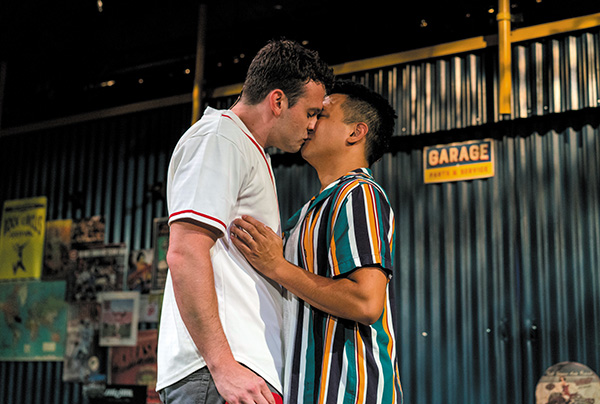 Music and lyrics come straight from alternative rock musician Matthew Sweet’s 1991 “Girlfriend” album. These track titles bonded the interaction between Cusimano’s musical abilities in vocal and guitar and Tuazon’s amazing melodious voice. Together with the outstanding back up of the amazing quartet band led by music director/keyboardist Kyrsten Hafso-Koppman, this trio combined, brought a sweet aroma of young love to the set. And the bands back-up singing accentuated the vocals of Mike and Will singing along with the music they loved, and guitarist Melanie Medina did not go unnoticed with her stunning vocals, including a phenomenal solo. 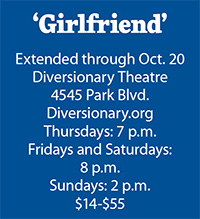 Cusimano’s strong vocals and stage presence are superb and melded well with Tauzon’s undeniable vocals, characterization and quirky sense of humor. This produced an incredible young love story between the two, as the plot rolls through the summer before Mike heads towards college while Will has no plans towards his future. It is a sweet romance embodied in first love experiences, including the fear of loss, the struggle of identifying as true self, and overcoming personal and social obstacles. This fictional story draws you in quickly, making it believable.

First love, a summer of exploration, the hurt of a first romance are plotted throughout the play in a beautifully synchronized way. From beginning to end, “Girlfriend” is a popping successful beginning to Diversionary’s “WE ARE” 34th season.