Former Vice President Joe Biden is on his way to becoming the 2020 Presidential nominee of the Democratic Party. Now the big question is who will be his Vice-Presidential nominee. Top individuals being mentioned are Senator Kamala Harris, Senator Elizabeth Warren, Senator Amy Klobuchar, and Stacey Abrams.  If Biden picks Harris as his V.P. and wins, or if she is chosen as his Attorney General, this would leave a vacancy in Harris’ U.S. Senate seat which Governor Newsome would appoint her replacement.  Word from many Democratic leaders throughout California is that State Senate President Toni Atkins would be their top choice to be named as our states U.S. Senator! 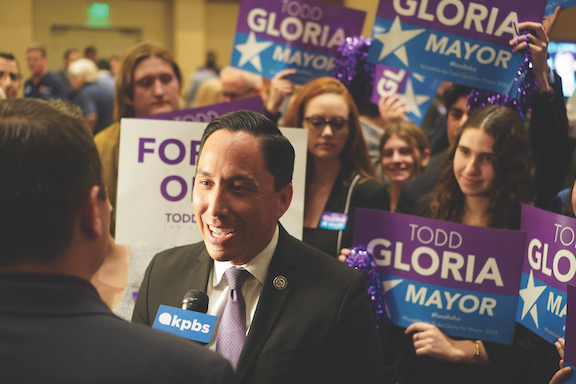 In the local congressional races, City Council President Georgette Gomez made it to the November runoff after being out spent by millions and word is that a vast majority of the candidates who did not make it are endorsing Gomez as they don’t want to see another congressional seat being bought by a millionaire. Candidate Janessa Goldbeck did not score points by making there be two LGBTQ+ candidates for this Congressional Seat and not having any solid record with the local LGBTQ+ community. But she did impress many of us and her endorsement by the Union-Tribune was also impressive. I believe Janessa Goldbeck has a very bright future ahead of her and many of us could see supporting her for public office in the future.  Hopefully she will do the right thing and endorse Gomez!

One the subject of doing the right thing, Sarah Davis who was clearly beaten by Councilman Chris Ward for the 78th State Assembly seat should drop out and endorse Ward, thus saving LGBTQ+ support and money, and shifting the focus to other candidates like Gomez.  Chris Ward is obviously going to take this seat in November and as Sarah was one of the top winners for the local Democratic Central Committee. By dropping out and endorsing Ward she would be doing the party a huge favor and would make a good future candidate for office.  Lorena Gonzalez was one of the biggest majority vote winners for the State Assembly and her future bid for Secretary of State is looking better than ever.  Brian Maienschein continues to face right wing Republican opposition though he came in first. We need to focus on his re-election to the State Assembly.  Now it’s time for Democrats to unite behind the strongest and best new voices for the San Diego County Board of Supervisors; Nora Vargas and Terra Lawson-Remer.

Of course Nathan Fletcher, our popular County Supervisor was a top vote getter for the Democratic Central Committee. As expected, Steve Padilla placed number one for the Chula Vista City Council Seat in District 3.

Stephen Whitburn beat out four opponents to place a very comfortable number one in votes for the San Diego City Council Seat – District 3, and with the strong endorsement of the San Diego Democratic Party and almost every Democratic club in San Diego including Democrats for Equality. Stephen Whitburn is the clear front runner for the November runoff.  Kelvin Barrios was, as expected, the top choice for the 9th district City Council seat and so was Raul Campillo in District 7.  Barrios and Campillo for City Council in November! Marni Von Wilpert will also make an outstanding Councilmember in District 5.

San Diego City Measure C (Convention Center Expansion/Homeless Projects/Road Improvements) ended up just short of the two-thirds majority needed to pass and is a big loss for our city…period!

It’s time for our community to disown Trump fanatic Gina Roberts who has done more to harm our community as a so called “Transgender Activist”.  Roberts destroyed the local San Diego Log Cabin Club by her embracing and supporting every homophobic right wing Republican office holder including “Sheriff Joe” in Arizona. Gina Roberts has never been a part of our LGBTQ+ community.  She has always stood with our enemies and those trying to take away our rights.  She is a traitor to our fight for equality and gives comfort to the right wing homophobic as there “Token Tranny” as some have called her.

Yes, I still call upon Carl DeMaio to apologize for his television commercials attacking our transgender military troops in one of the most negative political ads ever concerning the Transgender Community.  I have also called upon him to make a donation in the same amount of money he spent on those ads to a non-profit transgender organization.  DeMaio’s husband Jonathan Hale has made it very clear that he does not agree with DeMaios transgender position yet many are still attacking Hale, even suggesting he kill himself.  The hatred and ugliness from this past primary election must stop, from presidential campaigns to local campaigns! At times I’ve dreaded looking at Facebook because of all the negativity and I fear that soon it will get much worse.