As 2020 begins a new decade, it’s interesting to see how the world — full of so many challenges — has changed through my eyes. I came out of the closet as a gay man in 1975, the year I graduated from high school. Coming from a very religious Baptist upbringing, I had never even been in any kind of bar. I remember the very first time I went to one, it just so happened to be a woman’s show bar and even then, I didn’t realize where I was. What I do remember was there was a drag show that night, which brought a whole new outlook to me about being gay. I loved it. Michael Poor, my friend who took me that night, knew all the queens who performed. He introduced me to the star of the show, Paulette Leigh (Paul Briner), and I found out he was the older brother of Cheryl Briner, my best friend at the time who I’d known since high school. The next morning, I called Cheryl and told her I’d met her brother, which led to her becoming the first person I’d tell I was gay. I have loved and appreciated drag queens ever since. Watching them bring so much joy and laughter to others while using their talents to raise thousands and thousands of dollars during the AIDS epidemic and still being the first to give up their time and talents to raise money in their communities — they are our “drag heroes.”

I have had the pleasure of enjoying ongoing friendships with so many talented queens throughout my life and have built special relationships by working with them to raise money to help those in need. One such drag entertainer I have just fallen in love with is the extremely funny and talented Mariam T (Remington Scott Kienbusch). I met Mariam T at a benefit for the San Diego’s AIDS Memorial Park held at Lips, a very popular drag bar in North Park. Along with her fellow drag entertainers, they donated their time and talents to raise money for the cause. I just thought Mariam T was so funny, I needed to get to know her better. It just so happened that I ran into her waiting tables at Urban MO’s one day when I went there for lunch, so I introduced myself, gave her my card and got her phone number. I asked her if she would join me for coffee or lunch. I was putting together a charity event with a wonderful committee of dear friends and thought her talents would be perfect as the event’s host for the evening. I called her for about two or three weeks, and then after finally getting ahold of her, we finally met up and she agreed to be our host for the benefit. Damn, she plays hard to get.

Remington was born and raised in a small country town in Northeastern Arkansas. Growing up in the Bible belt certainly took its toll on a young, queer theater kid. Remington did say he was lucky, for the most part, that coming out was fairly easy for him. “You’d be surprised how many homosexuals there are in hillbilly land. It’s kind of like my mom said when I came out: ‘Well, son… you had a Barbie Dreamboat when you were 4. There weren’t many surprised folks.’”

He went on to tell me more about his childhood. “Growing up, I was allowed to be pretty feminine and eccentric. I played dress up in my grandmother’s clothes; I did her makeup; I painted birdhouses with mud and glitter; I only liked to play with Barbies; I used to lip sync to an old VHS recording of a Reba McEntire concert; I was a green wicked witch for Halloween; I had my own pair of ruby slippers; and by fourth grade, I knew who Elvira was and had a B-52s CD. My small-town parents knew they had a weirdo on their hands from a very young age. Every time I come home to visit, my dad always says, ‘I remember you being a little boy… 2 and 3 years old and looking at you and knowing I would lose you. That this place would never be enough.’ Isn’t that funny how parents just know things?”

Remington did theater for many years with a friend who passed away unexpectedly at 17. After that, he could never shake that feeling of having his naive idea of invincibility taken away from him. Unfortunately, he basically had a meltdown, failed in college and felt miserable and hopeless as to what to do with his life. Frustrated where he was in his life at the time, he packed his bags, sold all his stuff (left his gold PT Cruiser behind) and bought a one-way ticket to California. As he puts it, “It’s been one crazy ride.”

Before drag took over Remington’s life and he became Mariam T, he was very involved with community theater. He used to be the marketing director of a 501(c)(3) nonprofit theater group and also directed children’s theater and children’s theater summer programs. Right now, his hobbies include rhinestoning everything he wears. He likes to cook, read, go to museums and is a huge Disney nerd. (Seems like I know a lot of Disney nerds.) So, any chance he gets to go up to Disneyland, he’s there — that’s his happy place.

Mariam T has become one of San Diego’s most beloved comedian drag entertainers who is gracing stages with her amazing talents. She is always happy to lend a helping hand, especially by hosting benefit shows around town (I had the pleasure of working with her on our 30th anniversary event for Being Alive). Mariam T has donated herself for many charitable events to raise money for several organizations. One of her favorites last year was co-hosting Dragsgiving, with her superstar drag mom Glitz Glam, where they raised a lot of money for the Scott Carlson Thanksgiving Dinner as well as the Imperial Court Toy Drive.

When I asked Mariam T about her love life, this is what she told me: “I’m very single. In the words of my own mother, ‘It’s gonna take someone real special to marry you one day, son.’ I love my momma. She’s as country as a can of Spam but she tells it like it is and loves me more than anyone in this whole world. I’m open to the idea of dating, but with my career path, and where I see myself going, I don’t think a serious relationship is in my future any time soon. So, I’m stuck in a relationship with a narcissistic drag queen who never offers to pay the bill.”

Getting to know Mariam T has been really fun and along with building a great friendship with her, she brings so much laughter and joy to any room she’s in. I love her ideas, fast comebacks, kindness and creativity she shares with her explosive personality. Mariam T is currently involved with a lot of interesting adventures she’s been working hard on and said to just keep any eye out for what will be coming soon. She, of course, performs at several of our local gay bars, where you can catch her making people laugh and having a great time. I, for one, am excited to see where her career will take her. Mariam T is truly a raising star whose twinkle lights will one day blind you as the bright lights that will appear with her name.

To end with a quote from Mariam T herself: “If you need a good laugh… just have yourself a cup of T.” Thank you, Mariam T, for taking us into the world of laughter, especially in the difficult times we face right now. You are a star.

To book Mariam T or learn more about her, visit her on Instagram @TheMariamT or her website: sheherme.com 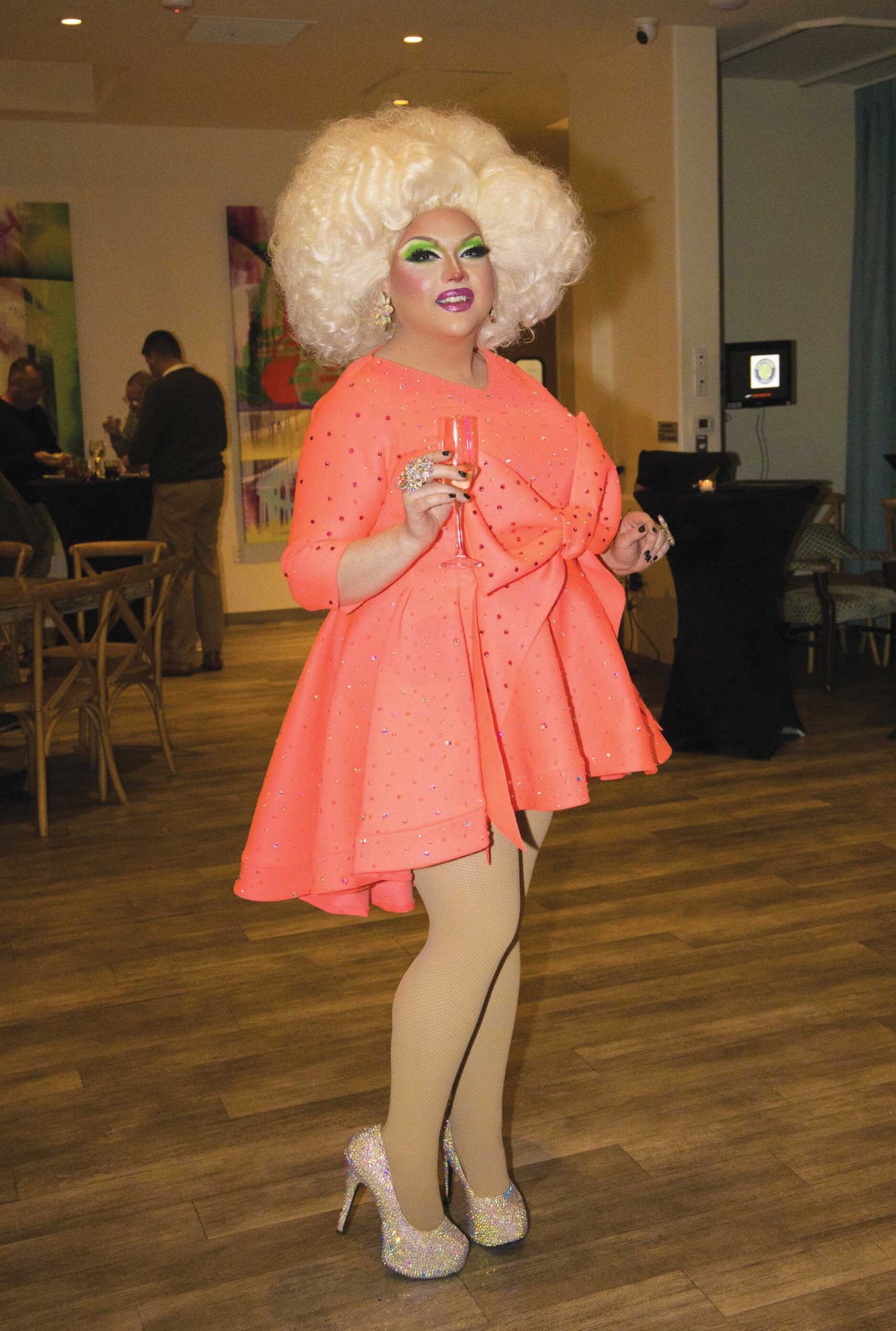