San Diego Men’s Chorus performs “Welcome to Burlesque” at its “Cher” concert on July 27 at the Balboa Theatre. (Photo by BIG MIKE PHOTOGRAPHY)

With her signature voice, her repertoire of Billboard charts tops and her ability to continuously adapt to a new generation of audience, taking on the musical legacy of Cher is nearly unthinkable for most musicians. But within minutes, the San Diego Gay Men’s Chorus undeniably established that there is nothing that this ensemble cannot accomplish, with one fierce performance after another. It was a seamless evening of fun, excitement, beauty and awe of musical excellence.

With a sold-out opening night, anticipation in the Balboa Theatre escalated quickly with “If I Could Turn Back Time,” a rousing beginning performance by the chorus. With fervor, the chorus proved that its arrangements of the chorus’s harmonies are still its first and foremost strength and they did not disappoint, with some of the best synchronized vocals to date. Without doubt, from bass to high tenor, the one voice filling the rafters of the theatre exemplified choral mastery. In tandem with soloists, imaginative choreography and innovative arrangements this was more than a choral performance — it was an unequivocal musical production.

There were so many stand out moments, it is impossible to mention them all, but it would be nothing short of profane not to give some high props to some of the essential elements that helped push this concert to higher level.

With Joseph Dasilva as Cher and Dustyn Evans as Sonny, we took a journey back in time with “I Got You Babe.” Both delivered the early beginnings of Cher’s career with this iconic song. Dasilva captured the Cher essence and in doing so captured the audience immediately from the first note. Evans was a perfect match, bringing the original duet to life. 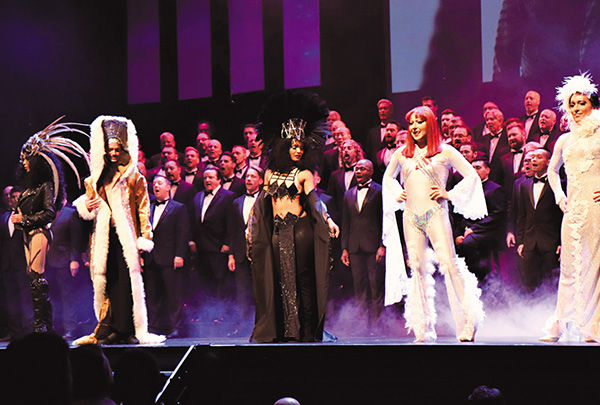 “Dov’e L’amore” is a stunning song. Flamenco guitarist Juan Marco, a maestro of the guitar encompassed the room with the beauty and complexity of his gift. Flamenco dancer Erika Lopez led the dance troupe with strong tradition of the dance. This powerful grouping with the chorus left the audience in awe and joy as it was truly a cultural experience that many of us are still talking about.

Although his solo was short, when Jermaine Staten stepped on stage during “Walking in Memphis,” as he sang his first line, the gasps of surprise and respect of his talent were heard throughout the audience.

AJ Bond and Jeffrey Hitchin were a wonderful combination for “Fernando’ and captured the beauty of the song with a lyrical dance of their vocals. Ross Bixler nailed it as lead vocal for “Gypsies, Tramps & Thieves,” another Cher classic that has stood the test of time. 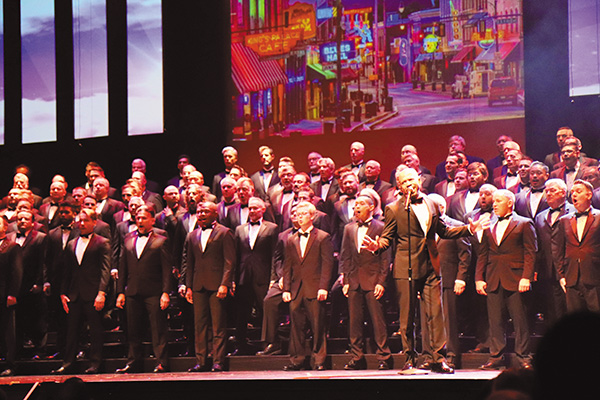 Dancers! All of you were at the top of your game, whether interpreting lyrics or performing dancing you added a flavor to the night that was sweet and powerful. Everyone involved knew their place and I have to say you set the stage for Act 2 with your performance of “Welcome to Burlesque.”

By the way, the Cher fashion show of present and past was a bonus with some of her most well-known costumes. It brought a lot of personality to the show and I absolutely loved it.

To the chorus, I wasn’t the only one in tears with “Song for the Lonely.” Simply beautiful in arrangement and harmony. That was a special gift and it was received with as much passion as you put into that performance. “The Way of Love” was another moving and emotional choice. Thank you.

“Believe” was an incomparable finale for this show. As always, you left us in the audience fueled, engaged and wanting more. The interactivity with the audience and the entire production on stage singing this song together was more than just a moment. It was momentous.

The San Diego Gay Men’s Chorus took six decades of Cher’s iconic music, and even though I expect an excellent delivery, you always take it to the higher level. “Jingle” is considered by many your best of the season, but this performance was as good as if not better than the holiday favorite. Passion, devotion and your love of music and what you are doing in the community is formidably present. I’m a believer.