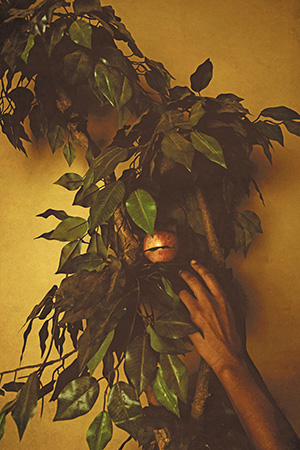 “We’re a mainstream arts institution that serves as a launching pad for artists to reach the national and international stage, so it is essential that we open the gate to marginalized artists to allow thousands of residents and visitors to Balboa Park the opportunity to see this important talent,” said Jacqueline Silverman, executive director of SDAI.

San Diego Art Institute Director of Development Caleb Rainey said this exhibition is important on several levels as one of the first, if not the first, that brings together bodies of queer Black and Latinx contemporary art within the same exhibition.

“I think nationally we are seeing and have seen for decades Black and Latinx people bearing the brunt of a combination of racism, homophobia and transphobia,” Rainey said. “In the art world, LGBTQ white artists have been traditionally given the spotlight in a way that is unimaginable for Black and Latinx artists. They are simply not shown, even in group shows at a rate that is comparable to their time, their numbers.”

Rainey said for a major institution and a major cultural park to anchor one of its major exhibition sites with LGBTQ artists of color is significant and inviting a level of visibility, not only to its visitors and patrons, but in terms of art psychology to collectors, funders, and curators to see a body of contemporary art by this population of artists.

“This exhibition is the first major LGBTQ showing of LGBTQ art in San Diego that is not a pop up, but a major exhibition,” Rainey said. “Until now, Black and Latinx LGBTQ people in San Diego have never seen themselves on the walls of a major exhibition event. That level of invisibility in both mainstream pop culture and fine art, the kind of damage it does to be invisible is incalculable. For us to be able to bridge that massive gap in terms of authentic representation that is by and about people in the community that we are working with brings queer people in San Diego a meaningful experience and opportunity. In addition to that, it provides insight to the straight, white LGBTQ people and to many of the issues that are so important for the community as a whole.”

Rainey said from the time you enter the gallery, plan to be immersed in the perspective of Black and Latinx LGBTQ artists and the communities that they come from.

“It is a wonderful experience of really having what is so often marginalized to be completely at the center and really walk away with a better understanding about intersectionality and what that looks like,” Rainey said. “It isn’t just an LGBTQ exhibit. It is very much a Latinx exhibit and an African American/Black exhibit. Those esthetics are extremely present with issue from police brutality, faith, traditions and immigration all woven throughout the exhibition just as much as sexuality and identity.” 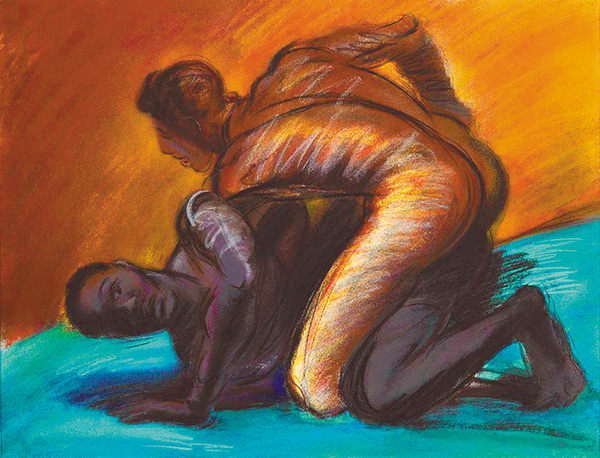 Rainey said as the top contemporary regional art center housed in Balboa Park and the Balboa Park audience, SDAI has a unique opportunity to basks in artists in a meaningful way that helps provide a more robust art exhibition for artists from their birth background.

“We really have an unprecedented cultural equity that ensures artists and curators and our backgrounds are proportionally represented exhibitions,” Rainey said. “In this exhibit alone and through our cultural equity platform, we were able to provide over $11,000 in quality framing to a variety of artists in our show. Artists, especially marginalized artists, can create the art but don’t have access to high quality framing and presentation. It’s a different beast all together. We are helping bridge that gap. The artists get to keep the quality framing and it increases the value of the work that the artists can charge, and they get to keep all of that. It is important that they are being equitably supported. We are really proud of that. We are hoping that communities of color and LGBTQ communities can ultimately know that SDAI can be worked on as an artistic home that is committed to people, committed to representation and committed to art and innovation in an inclusive way.”

One of the artists on display, dana washington is displaying a photographic portrait series and a video installation. She is currently a student at UC San Diego working toward her master’s in fine arts. She said she draws her inspiration from daily life.

“Everything that I create starts with me and then kind of goes outward,” washington said. “I’m kind of always questioning and confronting things that deal with identity, gender, specifically religion and overall issues with society with certain groups of people. I just try to confront those things and have a conversation about them through images.”

Around 2016, washington was contacted by Sara Trujillo-Porter, former San Diego Art Institute deputy director, and she was putting together an all-female exhibition called “About Face.” She wanted to display a video piece that washington created called “Under Bone.” She contacted washington again about “Forging Territories.” She said that she was encouraged by Esparza’s enthusiasm about the exhibition.

“I like that [the exhibition] includes different generations of artists,” washington said. “I think it is pretty equal as far as representation of races and genders and those that are nonbinary. I think it is a great conversation about loss, death, making negative images more positive. I think that conversation is necessary. A lot of the pieces in the exhibition touch on historical things which I think is interesting and amazing. There is a lot there and a lot to digest.”

For this exhibit, washington is displaying a series called “Awa” that kind of looks like oil painting, but it is photography.

“I just slowed down the shutter speed and used an external light and the slower shutter speed captures a lot more detail. But the way that I did the lighting, I bounced it off the wall, so it made it look softer. My intention was to make it look like a painting,” washington said. “I’m just happy that there is an exhibition of queer folks of color and that it opens up the doors to folks who haven’t had the chance to show their work and have the conversation about their work.”

Examples of the featured artists are:

“As a curator, I feel it is important for institutions, museums and galleries to feature more artists of color and specifically queer people of color within the larger conversation,” said Ruben Esparza. “Through ‘Forging Territories,’ we will be able to tell a much fuller story of voices that are not as frequently heard within the world of art and culture.”