You can be in support of BLM and SDPD

In more than 50 years of Latino and LGBTQ+ activism, I have never seen our community so angry and divided as well as so many friendships and relationships affected. Some activists are being downright hateful and attacking each other. The divide between LGBTQ+ elders/pioneers and the younger generation of LGBTQ+ activists is getting worse. There is a great deal of misunderstanding between the two. I am also witnessing the silence of many who should be speaking out and trying to bring us more together. I have received plenty of private phone calls from community members not wanting to speak out publicly.

The issues going on concerning San Diego Pride (Pride), the San Diego LGBT Community Center (The Center), Lambda Archives and the San Diego Police Department (and all of San Diego law enforcement) is about some LGBTQ+ activists trying to show their support for the Black Lives Matter (BLM) movement and the Transgender community. First of all, I know that there is not one LGBTQ+ leader or activist not in support of the BLM movement. This is not a movement about decades of racism and prejudice, but rather more than 400 years of it. As for the Transgender community, indeed our LGBTQ+ community and leadership are decades behind in support and focus as the continuing murders of Trans people across this country should have already been declared a “National LGBTQ+ Crisis” by our national LGBTQ+ leadership and organizations.

And let me be very blunt: This is also about LGBTQ+ guilt and LGBTQ+ leaders trying to deflect and tokenize. Let me now state my case: The last six San Diego police chiefs and law enforcement have marched in our parades and both the chief of police and the county sheriff have LGBTQ+ advisory councils that include Trans and People of Color (POC) as members. Never have the executive directors of Pride or The Center gone to them to voice their concerns. The REAL problem in the LGBTQ+ community of San Diego is that using Black lives and Black Lives Matter movement as a way to sever ties with law enforcement is nothing but tokenism. Look at the staff of The Center and Pride for the last four decades — the lack of Black LGBTQ+ representation is disgraceful. Almost every LGBTQ-owned business in Hillcrest now has Black Lives Matter posters in their windows but how many Black LGBTQ+ people are on their payrolls? Let me be even more blunt: Out of the countless bars and restaurants in our community, how many have Black employees? Can you recall the last time you ordered a drink from a Black bartender? How many Black LGBTQ+ community members are in our numerous LGBTQ+ organizations?

So instead of focusing INSIDE our own LGBTQ+ community and its organizations, some have focused on the OUTSIDE of our community and tried to deflect the racism and tokenism/lip service that has been going on for decades within our community.

The decades of hard work and relationship-building with the San Diego Police Department (and other law enforcement agencies that also now include LGBTQ+ officers) are being ignored and dismissed.

There is absolutely a need for continued change and evolution in the San Diego Police Department and County Sheriff’s Department and these changes are in fact happening, even more so as we have both a police chief and county sheriff who are 100% committed.

Renowned international historian and author Dr. Lillian Faderman is one of the most acclaimed and respected LGBTQ+ figures in the world. Following Lillian’s resignation on July 23 as San Diego Lambda Archives’ historian-in-resident over their anti-law enforcement stance, the Archives’ reinforced their bias by their very weak response. It is well known that some Lambda Archives board members are ANTI-POLICE and have been very public about their hatred toward law enforcement. Please read Lillian’s letter in this issue. I ABSOLUTELY stand with Lillian Faderman.

When I tried to get the San Diego LGBT Community Center’s executive director to speak to some concerned community leaders, she texted me back saying “she would speak to them but her stand was not going to change at all.” Is this dialogue and/or listening to our community?

San Diego Pride and the San Diego LGBT Community Center are now discriminating against our own LGBTQ+ brothers and sisters who are in law enforcement.

This issue is not going away and I have been told about certain LGBTQ+ activists who will be launching a very public and professional campaign concerning Pride and The Center’s bias against law enforcement with sponsors in and outside of our community.

As for me, I am the first to admit I do not completely understand some of the changes in our community; the Queer movement, proper pronoun usage in today’s climate, changing of the rainbow flag colors, etc. But I assure you, I am trying my best.

I absolutely need to listen more to our younger generation of LGBTQ+ activists and have more of an open dialogue with them, but in turn, they should understand more about our community’s history and respect the decades of activism and hard work done by all of the many LGBTQ+ elders/pioneers.

My 50-year record of activism and leadership when it comes to my fellow People of Color and the Transsexual/Transgender community is clear and solid and is a matter of fact not fiction as some young LGBTQ+ activists are trying to portray. I have been beaten by law enforcement both in Los Angeles and San Diego. I have been called “wetback, greaser, spic, faggot, queen, a he/she, freak, etc.” And yes, I can, and am, a supporter of Black Lives Matter as well as our local law enforcement — and a vast majority of our LGBTQ+ community are dually supportive too.

My message to The Center, Pride, and the Lambda Archives is to stop pointing fingers at others and look into our own LGBTQ+ community and focus on the racism and discrimination within our very own organizations and businesses. Don’t just march and say “Black Lives Matter,” start making it a reality within our own community. 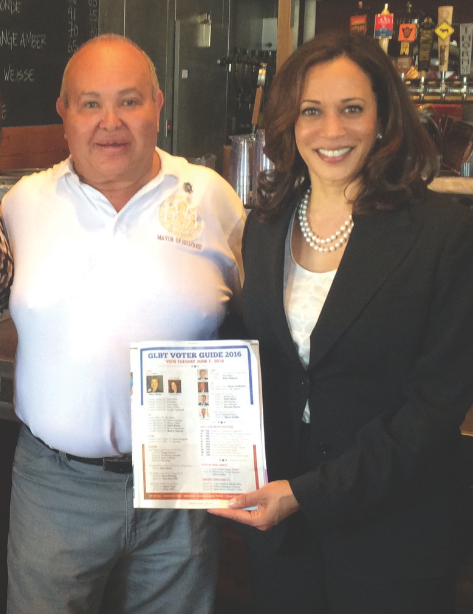 Former San Francisco Board of Supervisors member Bevan Dufty first introduced me to Senator Kamala Harris when she was a candidate for district attorney in San Francisco. In the decades since, she has never changed. She is down to earth, has a great sense of humor, smart as a whip, an amazing speech giver, and most importantly, she is a champion for the equality of all people. I firmly believe she is the most qualified candidate to become Biden’s running mate and would absolutely electrify the ticket! She would make an outstanding vice president and future president. Let’s make history with Harris!!

DABDA: The 5 Stages of Grief