What do Heels, Rugby and Wigs have in Common? Ruck N Tuck 2021

By Cesar A. Reyes

Drag is not a contact sport?! Tell that to the boys of the Armada, San Diego’s all-inclusive men’s rugby football club. It has been 5 years, well 6 (but let’s not talk about 2020) since the first Miss Ruck and Tuck fundraiser was hosted at Rich’s. During the night, attendees get to see 5 rugby players exchange their cleats for high heels and lip-sync for their lives in order to win the coveted crown. The event is a crowd-pleasing evening of raffles, jello-shots and of course drag performances. Each contestant gets partnered up with a local talented drag performer who serves as a drag coach. These drag coaches put the ruggers through a “Drag Boot Camp” to prepare them for the battle by learning songs, choreography and the art of performing in heels, gowns and wigs. 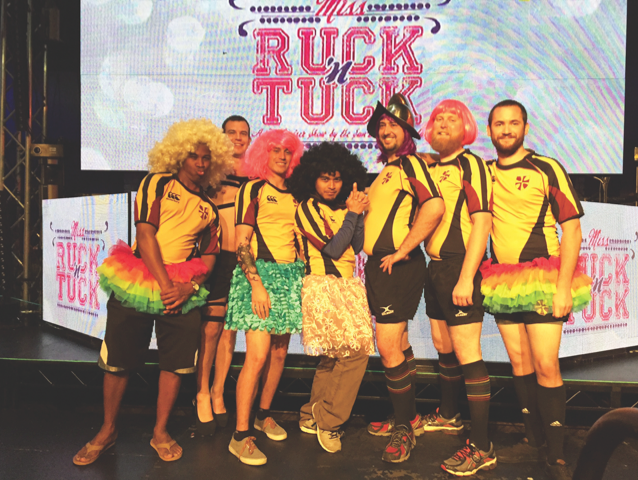 For this year’s installment, the event has turned in to a redemption show where 4 previous contestants will gear up in drag once again to have a second chance at winning the crown. Rugby players are very competitive, just so you know. Aside from the spectacular main show, the event also has some great raffle items you can win, team merchandise for sale, and plenty of rugby boys running around in their short-shorts to push their famous jello-shots and make sure everyone is having a good time.

You might be wondering why do all of this, aside from the fun experience? The team is raising funds to attend the Bingham Cup 2022 in Ottawa Canada. The Mark Kendall Bingham Memorial Tournament, or Bingham Cup as it is more widely known, is the biennial world championships of Gay and inclusive rugby.

The tournament was first held in 2002 in memory of 9/11 Gay rugby hero Mark Bingham, one of the passengers who fought back against hijackers on board United flight 93. While Mark and all on the flight tragically lost their lives when the plane crashed near Shanksville, Pennsylvania, it is widely recognized that through the actions of those brave individuals on board, the plane did not continue on to its intended target.

As a Gay man and regular rugby player, Mark played for San Francisco Fog and helped set up Gotham Knights in New York City. The Bingham Cup is held in honor of Mark’s memory and challenges stereotypes and perceptions of the LGBTQ+ community. Mark’s legacy sees rugby players, supporters and staff from around the world coming together every two years in a celebration of equality, inclusivity and sportsmanship.

From its modest debut in 2002, the 2018 edition of the Bingham Cup in Amsterdam gathered 74 teams from 20 countries. The Bingham Cup has become the largest amateur rugby union tournament in the world.

The Armada brought home the Bingham plate in 2018, meaning the team took 3rd place worldwide, “a real big damn deal” said Cameron Stevens, one of the current coaches of the team and the club president at the time. And in 2022 they want to keep the Plate in San Diego if not battle to bring the Cup home.

The trip has plenty of expenses, air fare, accommodations, and registration for the event. With the help of local business who sponsor the event the team puts on a fantastic show for folks to enjoy so they can make their way to the cup in Ottawa Canada.

Miss Ruck and Tuck Redemption takes over Rich’s Saturday November 6; doors open at 7pm and the show gets going promptly at 7:30pm. The team is keeping everyone’s safety in mind so proof of vaccination is required to attend. See the boys battle it out and put all their sweat and tears into a performance like no other with lots of twist and turns to gag you.

New this year the team has partnered up with the folks at OutTV to stream the event live for all the out-of-town folks and the stay-at-home folks who cannot make it in person. More information will be posted on the teams Facebook page San Diego Armada Rugby Football Club.