Blending into the commercial jungle of Clairemont Mesa is a fast-casual Middle Eastern restaurant you can only hope will someday spread its wings into your neighborhood.

Despite its confident name, Simsim Outstanding Shawarma is no false boast.

Located in a large plaza fronted by McDonald’s, just east of Interstate 805 off the Clairemont Mesa Boulevard exit, the bright modernly designed eatery would be all the rage if located in any hipster locale.

It was co-founded a year ago by Nawar Miri, a Detroit transplant who grew up in the food industry, earned a law degree, and worked as corporate director for the national chain, Urban Plates.

Before opening, he recruited from Jordan Ibrahim Alsharief, a chef and marketing major who earned his chops in five-star hotels and luxury restaurants throughout the Middle East.

Armed also with a passion for cooking dating back to his childhood, his shawarma is scratch-made, right down to the spices he grinds to marinate the chicken and beef-lamb pieces, which he then piles meticulously into large conical wonders.

The cones of chicken shawarma, for example, weigh nearly 80 pounds each. Like the beef-lamb cones, they’re loaded onto vertical spits where they lusciously baste in their own juices and seasonings under gentle, steady heat.

The sweating meats come into quick focus upon entering the eatery, which greets with a kind of modern-groovy look achieved by white walls, big windows, wooden tables, and live greenery. Sitting above a pair of metal dispensers offering complimentary teas are glass jugs filled with some of the spices Alsharief uses in his recipes, such as cardamom, cilantro seeds and cloves.

Though decorative, the spices are vital to many of the dishes, as they create far more complexity than what you’ll encounter in foods served at other Middle Eastern restaurants in our region.

A worthy introduction to these authentic flavors begins with the “signature side plate.” It features generous scoops of chunky baba ghanoush, creamy hummus, muhammara (pureed red pepper, garlic, onions and walnuts), and moutabel, a yogurt-based blend of roasted eggplant, tahini, lemon and garlic that you might mistake for the baba ghanoush. 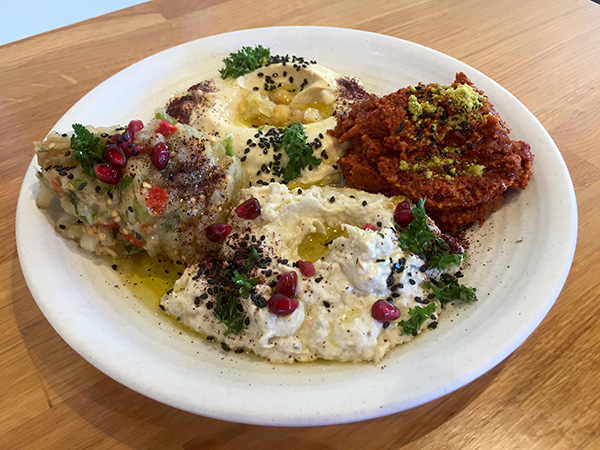 The arrangement is served with excellent pita bread using a dough recipe from Alsharief that’s made by a local bakery. Ditto for the saj bread enveloping the two different types of shawarma meats and their various garnishments.

Juicy pomegranate seeds give rise to the Simsim chicken shawarma, which commingles breast and leg meat. Also inside the wrap are diced potatoes, fresh parsley and garlic sauce. The flavors were soothing and somewhat holiday-like, especially once I began detecting hints of cinnamon and clove used for marinating the poultry. 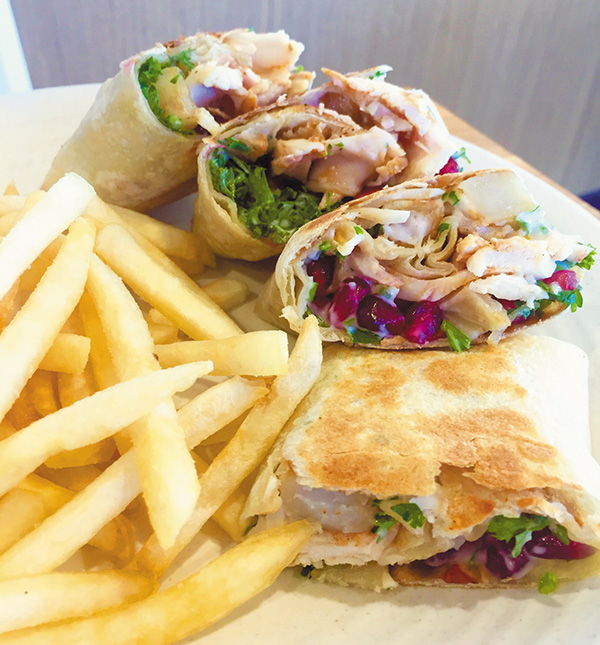 The “daring” shawarma wrap was also unlike any I’ve had in the past, mainly because of the invisible wisps of tomato sauce folded into the scheme. Alsharief says it’s a traditional ingredient in Middle Eastern countries. Combined with the 70/30 ratio of beef and lamb, plus onions, arugula and tahini sauce, it added the right amount of tang and acidity to keep me chomping away. 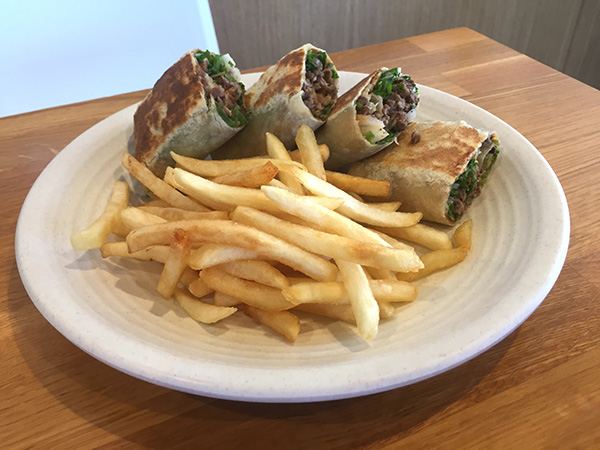 Falafel, too, is made in-house. And it’s full of character — crispy on the outside, tasty and steamy on the inside, nothing like those bland, mealy orbs made from powdered mixes. Alsharief actually soaks the garbanzo beans overnight and then cooks them down with the appropriate spices before blending them down for shaping. 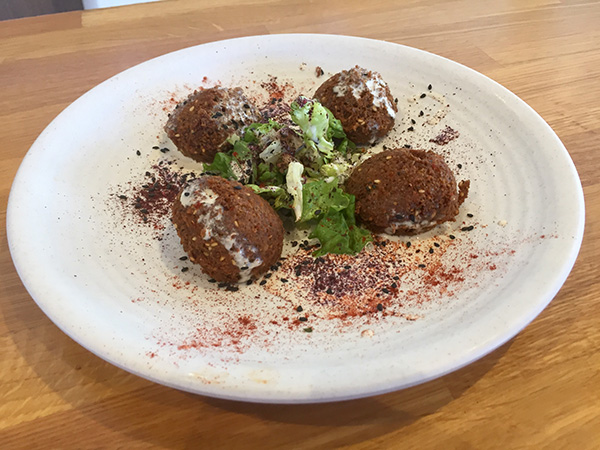 From the “bowls & plates” category, I tried the “indulge,” which offered a medley of the carved chicken, the beef-lamb meat, garbanzos, mint, sumac, slivered almonds, and tomato and tahini sauces.

Naturally, a riot of flavors ensued, not to mention a lively contrast of textures due to the topping of crumbled pita chips. 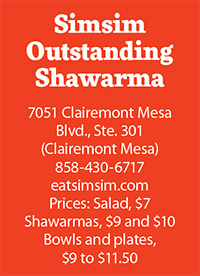 The bowl further proved that too many of the Middle Eastern restaurants I frequent skip out on certain spices and cooking steps while pulling in Mediterranean-American influences that can interfere with this type of cuisine. Feta cheese, for instance, is nowhere to be found here. Although skinny french fries do show up on some of the plates — and I didn’t mind them at all.

— Frank Sabatini Jr. is the author of ‘Secret San Diego’ (ECW Press), and began his local writing career more than two decades ago as a staffer for the former San Diego Tribune. You can reach him at fsabatini@san.rr.com.