The STRUT Awards:Recognizing the Community

Among many things, our community is known for its substantial LGBTQ+ industry full of so many amazing individuals doing amazing things. These are integral people in our community and they work very hard year-round in our local businesses to make us happy. From our hot cup of morning coffee, to our amazing nights out with friends, getting the pleasure of being entertained by some of the best talent in the world. Our community is important, we represent the freedom of self-expression and how beautiful that can be in practice. Our outstanding community deserves recognition, and two Coachella Valley locals are doing just that with the first annual STRUT Awards. Charlie Rosenberg and Aura Van Dank have founded The STRUT Awards and aim to recognize the community’s favorite industry workers, businesses, performers, and so much more in the Southern California region. 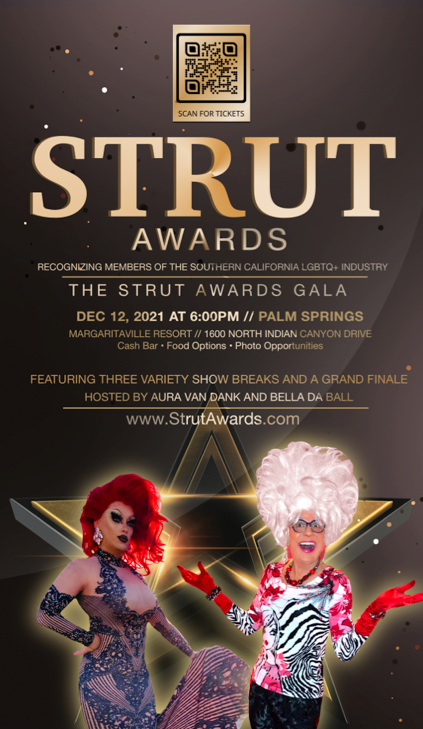 Aura and Charlie wanted to start the STRUT Awards to celebrate and recognize all the amazing members of the community for all that they do to make the Southern California LGBTQ+ industry so special. There are just under 400 nominees among 35 categories of the region’s favorites, including titles like Favorite Drag Performer, Favorite Event Producer, Favorite Publication, Favorite Restaurant, and Favorite Business Owner. The 35 winners will be announced and presented their awards on December 12th, 2021 at 6pm when the STRUT Awards Gala begins. The Gala will be hosted by Aura Van Dank and special guest co-host, the Palm Springs legend herself, Bella da Ball! The event will feature a full night of celebration, entertainment, and a strong sense of community appreciation that will bring all of the industry members in Southern California together, to further help the industry flourish.

During the event, there will be photo opportunities, cash bars, and food options. To make this an accessible event for all those who are interested, general admission ticket prices start at just $34.99 and all those nominated are given a discount code for one free ticket for general entry to the gala or to be used towards upgrade options. There will also be a Reception held at the top of the hour that will allow members of the community to socialize and explore Charitable Non-Profit Partner Exhibits. Not only is the event aimed to recognize and appreciate those who have made our community so special, The STRUT Awards also showcase those talents live on stage. During the awards gala, there will be three spotlight variety shows featuring some of our community’s amazing talent, drag queens, singers, singing drag queens, and more! 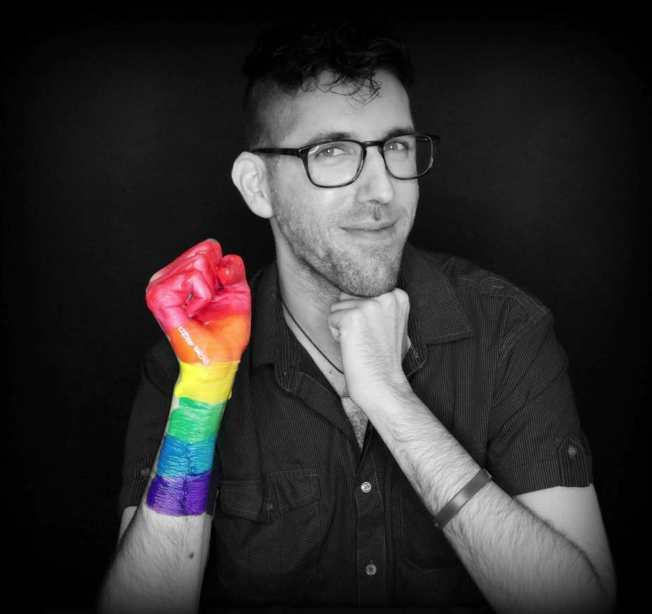 Charlie Rosenberg was born and raised in the Coachella Valley and is a proud member of the LGBTQ+ community in the desert. Charlie has been an active member of the community in Hillcrest, San Diego for 12 years, and developed the popular Hillcrest Social mobile application, he did event photography at many events throughout the community. During the pandemic Charlie co-founded OutAt.TV for drag performers, podcasters, musicians and more around the country to broadcast their art on streaming platforms. Since his permanent move back to the Coachella Valley with his partner and drag queen Liam Goff, aka “Aura Van Dank”, they have both been heavily involved in the community. 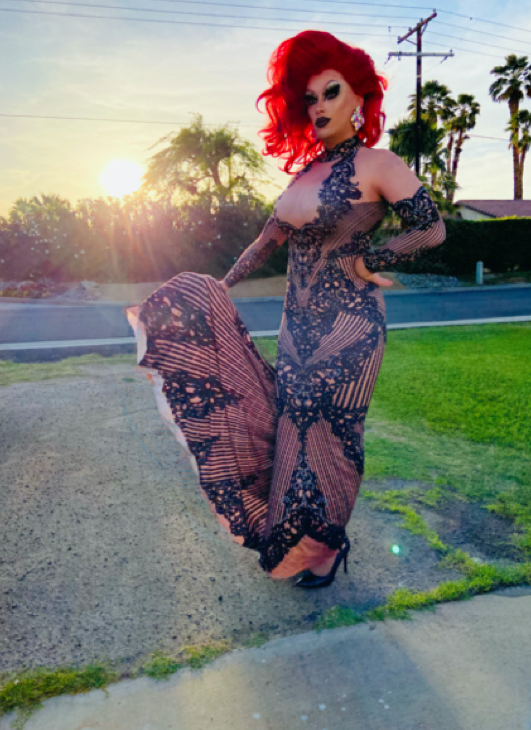 Since moving from North Carolina earlier this year, Aura Van Dank has been quickly making a name for herself in the Coachella Valley and SoCal region with her unique style and over the top dramatic performances. For the past year, Aura has been performing at numerous local spots, participating in charitable drag shows, volunteering to perform at Palm Springs Pride, and bringing her flavor of drag all over. She has been performing in drag for four years and got her start working at small bars across North and South Carolina building up a reputation of professional sweetheart, and has been doing the same thing in the Coachella Valley.

As a drag performer and co-founder of the event, Aura Van Dank will be hosting alongside the fabulous and incomparable special co-host Bella da Ball. Brian Wanzek aka “Bella da Ball ” is well known throughout the Coachella Valley and greater SoCal region as one of the top LGBTQ+ event hosts. She has been working in charitable events for many years and is at the top of the game for raising money and creating visibility for numerous non-profit organizations. Bella is known for her huge personality, even bigger hair, and unforgettable smile. Her bubbly personality is infectious and she is sure to give an audience their money’s worth when they show up at a Bella da Ball show!