Al Smithson has received the Rev. David Farrell Community Service Award that is given annually from the Metropolitan Community Church (MCC) to the person who most follows the example of the late longtime pastor.

“I’m particularly honored because I have so much esteem of David Farrell,” said Smithson, who is a retired attorney. 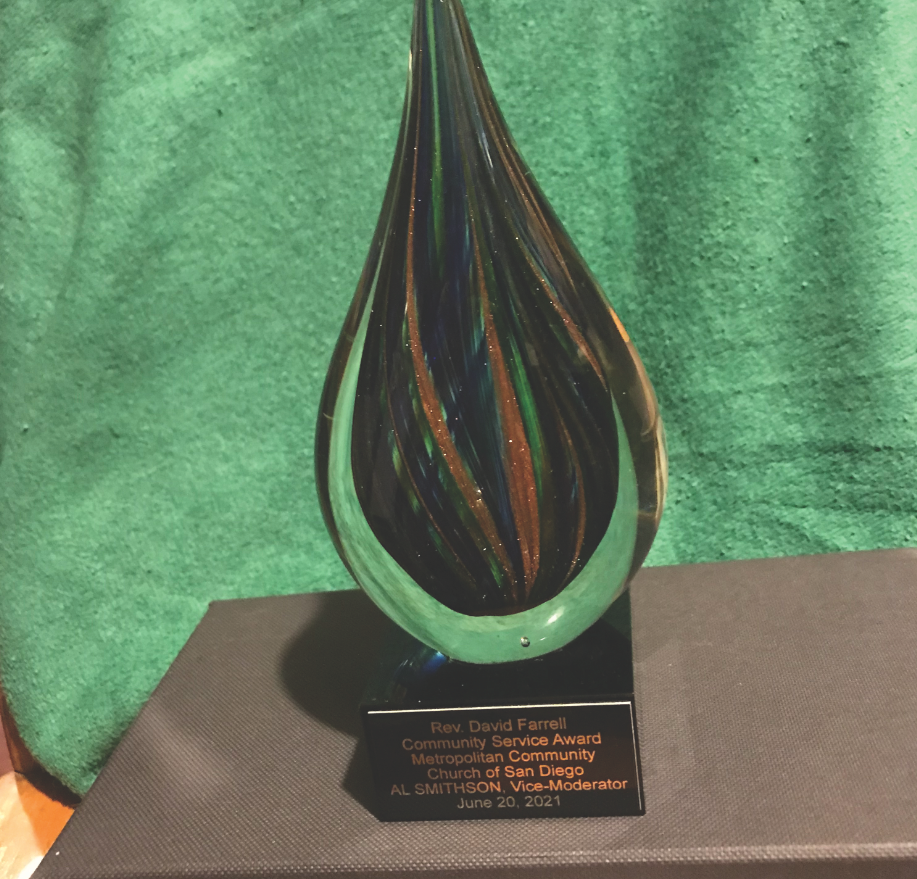 Farrell was senior pastor from 1975-1995 during the blossoming of the LGBT rights movement and the tragic years of the AIDS crisis. A fundamentalist group from Santee began picketing MCC, which caused Farrell to put speakers outside so the protesters could hear the service.

Smithson has served MCC for 51 years as the vice moderator of the Board of Directors since the founding of the San Diego church in 1970.

Smithson said it was a “total surprise” when Senior Pastor Dan Koeshall made the announcement that he had won the award. Smithson said Lee Bowman, church communications minister, kept the award locked in his desk for several weeks.

Like Farrell, Smithson is deeply involved in the community and in the early years, he was part of the “bar ministry” in which he and others would invite patrons to church on Sundays. Smithson said he encountered many who had never been invited to a church at a bar.

Koeshall said people honored with this award “carry the same inclusive love, spirit, outreach to the community exemplified by Farrell,” who died at age 80 in 2017.

“David was heavily involved in the community with the message always being about justice and God’s unconditional love for everyone,” said Koeshall.

Smithson worked with Farrell in purchasing the church building on Fern Street in the 1970s, and MCC has the distinction of being the first LGBTQ organization to own property in San Diego.

Smithson also assisted in the purchases of a church building on 30th Street and also the current location of 2633 Denver Street in 2009. He donated legal services to MCC as well as the LGBT Center, and Dignity of San Diego.

“He was inducted in the San Diego LGBTQ Veterans Wall of Honor and was the first openly gay delegate to sit on the California Democratic Central Committee,” said Koeshall during the announcement in church.

Smithson wrote a long running legal column called “The Philly Lawyer,” in “Update,” the first LGBT newspaper in San Diego which published from 1979 until 2005.