Snowflake, a new film that evokes the sense of panic half of America experienced in 2016 when the presidential election was called for Donald Trump, started streaming on Vimeo on August 4, the ten-year anniversary of the historic overturn of California’s ban on same-sex marriage.   “The repeal of Prop 8 is a reminder of the importance of citizens fighting for our rights,” says the film’s writer and director, Jack Tracy.  “This November will be the most consequential election any of us have ever voted in, and we must all do our part to put an end to the nightmare that has been the last four years under this administration.”

Snowflake is a fictional story that depicts the fear of a nation when a dictatorial politician is suddenly thrust into the White House.  While most of the characters in the film are gay, Snowflake shows how their other identities – age, race, and their economic status – shape their individual views.

At the center is Ethan, played by JJ Bozeman, a young Filipino gay man whose fear of the new administration’s threatened rollbacks on gay civil rights hits a fever pitch.  Ethan’s increasing panic ultimately causes friction with his friends, specifically when Ethan boldly proclaims that he feels no pity for the victims of a recent mass shooting at a gathering of conservatives, calling it karma.  “I’m tired of always being afraid, let them be afraid for once,” he tells his friends.   (clip: https://youtu.be/YxYM_w3MGWQ)

Ethan’s friend Owen, a black man in his early thirties played by Matthew Johnson Harris, believes that racism lies at the heart of the shocking election, and questions how much Ethan’s boyfriend Ryan, a white, gay but hetero-passable executive, played by Jack Tracy, would sacrifice for his community. He argues that a “rich, white dude is not going to protest a system that benefits him.”   (clip: https://youtu.be/qyt4Kvth7KA)

Paul, played by Bill Morton, is an older gay friend who lived through the AIDS crisis.  He urges for activism, reminding Ethan that progress has never been linear but more of a pendulum. (clip: https://youtu.be/skc-nP91vg8)

The movie reaches its climax when happenstance—or divine intervention—puts the Vice President and Ethan in the same room at a fundraising event and Ethan is forced to choose the best way to protect his friends and community from the threat of the new administration. 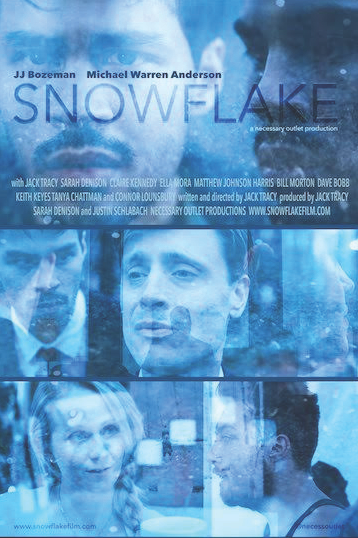 Following its August release on Vimeo, Snowflake will be available on Amazon on September 4 (honoring the day in 2012 when same-sex marriage was publicly supported on a national platform at the Democratic National Convention) and then begin streaming on Dekoo on October 27.

“While I am overjoyed that the nation is finally beginning to grapple with the hard truths of systemic racism and police brutality, it is still shocking to me just how much we as a nation have numbed to the outrageous fraud and corruption of the Trump administration,” reflects Jack Tracy. “It has been normalized.  I hope when people watch Snowflake, the emotional spiral that I and so many other Americans felt in the days following Trump’s election will resurface and a new fire will be lit.  We need a massive turnout in 2020 that gets our current president the hell out of office, keeps the House of Representatives and puts the Senate in democratic control.”

Snowflake is available for pre-order now at https://vimeo.com/ondemand/snowflakefilm.  Visit http://necessaryoutlet.com.