If you’ve ever seen or waved a Pride flag with six bright, beautiful colors, know that it is not a copy of the original Pride flag designed by Gilbert Baker in 1978. That said, most in our community would acknowledge the six-color version as the Pride flag or at least a version of it. The original version had eight colors with each color holding a meaning: hot pink for sex, red for life, orange for healing, yellow for sunlight, green for nature, turquoise for magic and art, indigo for serenity, and violet for spirit.

Over the decades, there have been many versions of the Pride flag as colors have been added or taken away for different logistic or artistic reasons. One of the most compelling versions I’ve learned about in my work is the “Victory over AIDS” Pride flag from 2001 that added a black stripe after the violet stripe, and it was stated that the stripe would not be removed until we found a cure for AIDS.

I also find it fascinating to think about the meaning of the flag colors and how we have adopted them as a community, sometimes without knowing it. Not everyone realizes that the red AIDS ribbon represents life, or the orange of Trevor Project represents healing, or that the purple we wear for our fallen and against bullying represents spirit on Spirit Day.

Symbols like the Pride flag have an important role to play in building a community, giving us something iconic we can use to be and feel seen. Unfortunately, our history teaches us that not everyone has always been welcomed or fully embraced in the LGBTQ community. And the “we” in that statement can mean any of us. There was a time that we referred to ourselves as the “gay community,” but over time our language has grown as has our understanding of the spectrum of sexual orientation and gender identity.

In the early days of our movement, many who had access to wealth and influence were cis white gay men and women. A huge part of the legal arguments and public education narrative that early activists used centered on a perceived inherent and immutable nature of sexual orientation and gender identity. Bi and trans people were in many ways intentionally pushed out of our community and forced to build new communities of their own. In 1998, Michael Page created the bi Pride flag, and in 1999, Monica Helmes created the trans Pride flag. These two important symbols gave new visibility and recognition to members of our community. I remember the early days as those flags began to be more visible, folks would say that “there was no need for them,” or “the rainbow Pride flag already includes you.” Clearly, 20 years later, those beautiful bi and trans flags endure as symbols of community that push back against the transphobia, biphobia, and erasure that are still prominent within our own LGBTQ community.

There are now scores of Pride flags that have been adopted by our ever-growing understanding of the diversity within our community. The leather community, bears, seniors, lesbians, pansexual folks, polyamorous, and more all have a version of a Pride flag.

In 2017, a flag was introduced in Philadelphia that used the six-color Pride flag and added a black and brown stripe to honor the lives and activism of black and brown people in our community. Just as racism exists in this country, it continues to exist in the LGBTQ community. Racism is one of the most challenging issues to combat, and when the Philadelphia flag was showcased, there was a flare of racism felt by many people of color in the LGBTQ community. Some claimed the new flag dishonored the original flag, others claimed it wasn’t needed.

As a Latinx queer person, I know all too well the sting of racism inside and outside the LGBTQ community. When I saw the Philadelphia flag for the first time, I felt seen. I felt like the issues it was intending to highlight were the issues I faced. I felt like the community it was rallying together and honoring was my community.

The Philadelphia flag may not be a flag you want to fly or one you feel represents you, but denigrating it serves justice to no one. I’ve listened to the anti-gay right use coded words in meetings trying to ban the flying of any Pride flag because as they say, “The American flag includes all of us, and we don’t need to fly any other flag.” We all fight to fly our flags, to be seen.

In 2017, near the end of Gilbert Baker’s life, he created an update to his original design, adding one more stripe — lavender to mean diversity. This, of course, is the same year that the Philadelphia flag was unveiled. Diversity seemed to be on many people’s minds.

When asked what the proper way to hang a Pride flag was, Gilbert would say that it didn’t matter, as long as you hang it with pride. To me, what Pride flag or flags you choose to fly shouldn’t be a point of controversy. Fly your flags with pride and appreciate how beautifully diverse our community is. It’s something we can all take pride in.

When you look up the definition of “flag” in the dictionary, the description of the word is “a piece of cloth, varying in size, shape and color … used as the symbol of a nation, state or organization, as a means of signaling.” For the purposes of this discussion, it is relevant to understand the history and the intent behind the rainbow flag with its colors becoming the symbol of LGBTQ Pride in 1978, and in 1994, becoming the symbol on a worldwide scale in honor of the Stonewall riots and the LGBTQ rights movement.

In 1978, when Gilbert Baker, a gay man and drag queen, was urged by Harvey Milk, the first openly gay elected official in the U.S., to create a symbol of pride for the gay community, he chose to make that symbol a flag because he saw flags as the most powerful symbol of pride. The dictionary definition of “flag” supports Baker’s vision then as it does today. We rally around the rainbow flag on Pride weekend to show our pride in who we are together, as a community, and as individuals out and proud.

To understand the importance of a “symbol” to the gay liberation movement of 1978 is key to how the rainbow colors on their own, made a statement to a nation whose laws in most states made homosexuality a criminal status punishable by imprisonment and sometimes mental institution confinement. Baker felt a “flag” fit the mission of the movement at that time to proclaim and make visible LGBTQ people from all walks of life and all diverse communities. The intent of the message, and choice of a rainbow for a flag was to urge LGBTQ people to come out, be visible, live in truth, and get out of the closet and out of living a lie. A rainbow flag was, in Baker’s words, a “natural flag from the sky” that all LGBTQ people could rally around and under. The colors were chosen for what they represent on the meaning and message on the color spectrum, not for race, color or religion of the LGBTQ individuals standing under the flag, but to represent the message of the movement and the people in the movement as a family together under the sky. Each original stripe had its own meaning (hot pink for sex, red for life, orange for healing, yellow for sunlight, green for nature, turquoise for art, indigo for harmony and violet for spirit).

The first versions of the rainbow flag were flown on June 25, 1978, at the San Francisco Gay Freedom Day Parade. Baker and volunteers had made them by hand. They were an instant hit. Demand for the flags called for mass production, which resulted in color modifications due to production issues (the pink and turquoise stripes were removed, and indigo was replaced by basic blue, which resulted in the modern-day six-striped flag (red, orange, yellow, green, blue, and violet). The various colors came to reflect both the immense diversity, and most importantly, the unity of the LGBTQ community in its ongoing pursuit of equality. For Baker, the meaning of the colors was the message.

As executive director of Stonewall 25, it was a great thrill and joy to see Gilbert Baker’s mile-long version of the rainbow flag for the 25th anniversary of the Stonewall riots, marched up First Avenue past the U.N. Building and become the international symbol for LGBTQ Pride in 1994. The photo was the centerfold in Life magazine that year! Stonewall 25 was an international event that provided outreach the preceding year to LGBTQ people around the world. One hundred activists from various nations were flown to New York City for the event. The mile-long flag had LGBTQ people from every nation, every part of the U.S. and every color together under the flag carrying it. A symbol of diversity and unity in itself that day.

Science says that rainbows appear in seven colors, because water droplets break white sunlight into the seven colors of the spectrum. You can only see a rainbow if the sun is behind you. Colors are made by mixing any two of the spectrums. While the different colors are often associated with “diversity” in our community, the original intent and today’s focus should continue to be on the “meaning of the colors” as well. I have seen many versions of our rainbow flag representing various communities within our LGBTQ community and I love seeing them. I also appreciate the bisexual flag, the transgender flag and the flags that represent other individual segments of our community’s diversity. Our LGBTQ community and its diversity is represented best in my opinion when we stand together in unity. We should not forget the history and the intentional meaning of standing under one official flag, the six-striped rainbow Gilbert Baker flag that has become the international symbol of LGBTQ Pride in promising times and challenging times around the world. 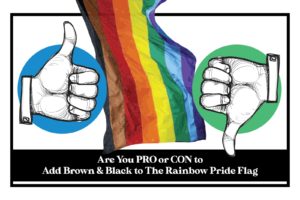 Angels to the rescue

We want to kick off the week by introducing you to

On the August edition of Conversations with Nicole

Our August Issue spotlights new business in the co

New Business Blooming in the Community is So Refre