Montreal will let the good times roll again when the Bad Boy Club Montréal, aka BBCM Foundation, hosts the 30th edition of its world-renowned Black & Blue Festival from October 7 to 11 during the long Canadian Thanksgiving weekend and U.S. Columbus Day Weekend.

After its 30th-anniversary edition was postponed in 2020 because of the COVID-19 pandemic, the festival’s organizing committee has been working with municipal authorities and Quebec public health officials to plan all possible 2021 event scenarios, to make sure they conform to all COVID-19 pandemic sanitation measures to ensure the safety of all partygoers and employees.

Canada has reopened to tourists! Since August 9, fully-vaccinated citizens and permanent residents of the United States are eligible to enter Canada. Visitors must upload proof of vaccination status through Canada’s ArriveCAN system before their trip. Other foreign nationals who qualify as fully-vaccinated will be eligible for entry into Canada beginning in September. However, things are changing quickly with the Delta variant. For the latest updated information about travelling to Canada, visit mtl.org. 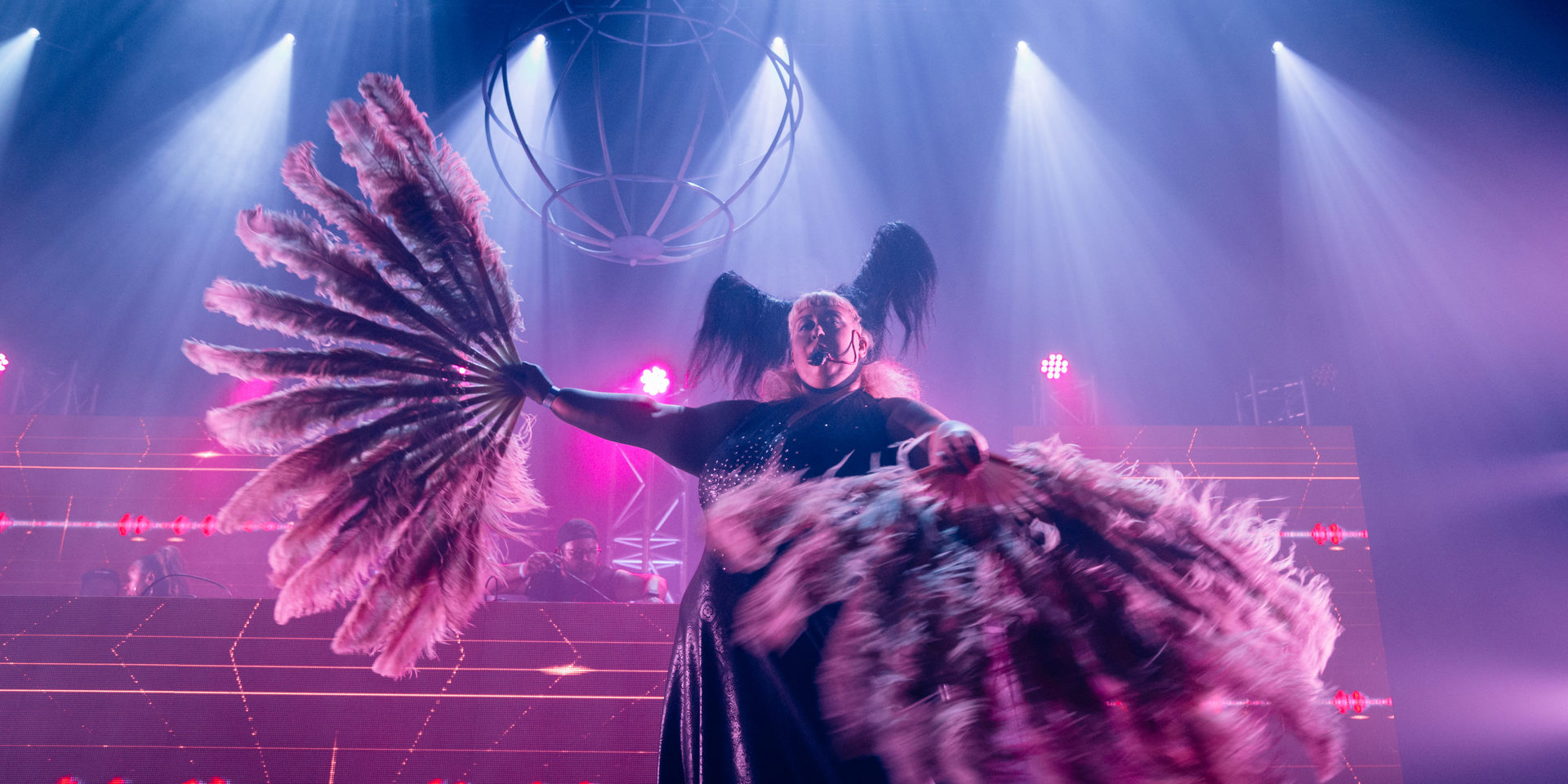 “We hope the situation in October will allow us to hold as many face-to-face events as possible,” says BBCM Foundation president and founder Robert J. Vézina. “That’s why we’re setting up different scenarios for each activity, so that we can adapt to the reality of the moment when we’ll know exactly what to expect.”

If anybody can pull this off, it is Vézina. Over three decades, with his sure hand at the helm, BBCM and Black & Blue Festival have overcome many obstacles big and small.

After the violent July 1990 Montreal police raid on Sex Garage, an underground loft party widely considered to be Montreal’s Stonewall, Vézina came up with the idea to host an all-night dance party.

“Montreal needed a breath of fresh air back then, especially in the gay nightclub scene which was a bit lame at the time,” Vézina says. “We first wanted to create a new, fun and thematic event in Montreal and we invited our friends from Toronto, Boston and New York to join us at the beginning. But we made sure we had the approval of the police to do an after-hours, with all our permits in order to avoid the problems encountered at Sex Garage. After the first two Black & Blue events in 1991 and 1992, we knew we had a successful formula and decided to do it on an annual basis.”

After drawing 800 revelers to their first dance party in an abandoned bank in 1991, Black & Blue quickly became one of most successful circuit parties on the planet, filling many of Montreal’s legendary and iconic venues over the years, like Olympic Stadium, MTELUS and the Palais des Congrès (Montreal Convention Centre).

In addition, the registered non-profit BBCM Foundation’s simultaneous goal is also to support organizations that provide direct assistance to people living with HIV/AIDS, as well as to help LGBTQ community groups. The first Black & Blue party raised $3,500 for AIDS Community Care Montreal in 1991, and the BBCM Foundation has since helped various HIV/AIDS and LGBTQ organizations with donations, free ticket allocations for various groups to use for their own fundraising activities as well as promotional support, for an overall value well above $2 million.

This is no mean feat for BBCM which – unlike many other prominent cultural promoters – is chronically underfunded by all levels of government.

“We continue to draw tourists from around the world and help support local community organizations,” says Vézina who in 2007 was also founding vice-president of Fierté Montréal Pride which organizes the largest Pride in the Francophonie. “But getting government support and private sponsors is still a constant battle,” explains Vézina.

Meanwhile, BBCM spends what is necessary to ensure their Black & Blue main event is of the highest quality, earning accolades for their high production values from such publications as The New York Times and The Advocate. Perhaps the most remembered installation is the 25,000 lit candles that greeted partygoers on the outfield of Olympic Stadium at the 2000 edition of the Black & Blue main event.

Performers over the years include pop and dance legends like The Human League, Martha Wash, Ultra Naté, Loleatta Holloway and Kristine W., while all-star DJs include Danny Tenaglia, Victor Calderone, David Morales, Hernan Cattaneo, Susan Morabito, Angel Moraes, Roger Sanchez and Chus & Ceballos, as well as Montreal’s own Misstress Barbara and Mark Anthony – Vézina’s fave DJ over the years – who has spun for at least half of the Black & Blue main events over 30 years, including the very first party.

“This is partying on a grandiose scale!” Mark Anthony said in 2010. “My favorite moment occurred during Black & Blue 1999 at noon, the end of the party, at the end of my set. After the last song, I looked down to the dance floor from the DJ booth which was two stories up! A sea of bodies still stood there clapping and cheering for more music! When the lights came on, I was blown away to see about 15,000 people still assembled on the dancefloor. It was a very magical and surreal moment.”

Another key reason for Black & Blue’s longevity is that it no longer is just a gay party. While it remains predominantly gay, longtime BBCM organizing committee member Caroline Rousse says, “The Black & Blue dance floor is one of the rare places where nobody cares what your sexual orientation is – except when you want to pick someone up! This is the really special aspect of the Montreal crowd: gays and straights mingle together and there is no homophobia. We also encourage gay tourists – surprised to see many straights at our party – not to discriminate against heterosexuals. Everyone is accepted and equal at our event.”

“The gay core is still very present, especially in the middle of the dance floor,” Vézina adds, “but it’s a big celebration for everyone. Young ravers and many gay-friendly beautiful people attend.”

While some circuit parties have been criticized over the years for widespread drug use that can lead to unsafe sex practices, BBCM works with local organizations to promote safer sex and responsible drug use so that the music-oriented Black & Blue experience is safely enjoyed by all.

Vézina also points out that sex on the Black & Blue premises is a rarity and not officially permitted. “Starting with our performers, we don’t allow frontal nudity,” he says. “There is cruising on the dancefloor, but sex on the premises is very rare. You’d have to find a very dark corner for a very short time because our roaming yet friendly security is present everywhere all night. In any case, this event is about the music, the special effects, the shows, and about community spirit.”

While it’s true that Black & Blue has become a well-oiled machine over the past 30 years, Vézina has also come to expect the unexpected. When asked for his festival’s worst moment, Vézina doesn’t miss a beat: “When the Hell’s Angels strangely showed up in a huge uniformed gang in an attempt to enter the main event in 1996. Our event is obviously not the style for such criminals… We had to close the doors for quite a long time – nobody could come in or out – until the police got them to leave, and they have never come back!”

Black & Blue remains one of the world’s iconic circuit parties, but after decades of boffo box office – in 2002, more than 80,000 people from all over Canada, U.S.A., Europe, Australia, and South America attended the many Black & Blue Festival activities – Vézina says, “We’ve decided to adapt our events to the present-day realities of the circuit party scene as well as the changing priorities. That is why in 2018 we launched the Carnaval des Couleurs (Carnival of Colors) as a new innovative part of the festival. The Carnaval is a series of musical and mainly ‘live’ activities – hence not DJ-oriented – that are totally free and open to everyone, with the goal of bringing together the LGBTQ and multi-ethnic communities, to celebrate diversity and inclusion and also to help to fight racism and homophobia.”

“We get the most beautiful people from around the world in Montreal during Black & Blue,” Vézina says. “Our reputation as a fun, thematic and sexually-charged event started in 1991 when we invited our good-looking friends to attend our very first party. That’s how we got our bad-boy reputation. It was a bit obnoxious, but it worked. But the whole team, including myself, we’re still taking this all one year at a time.” 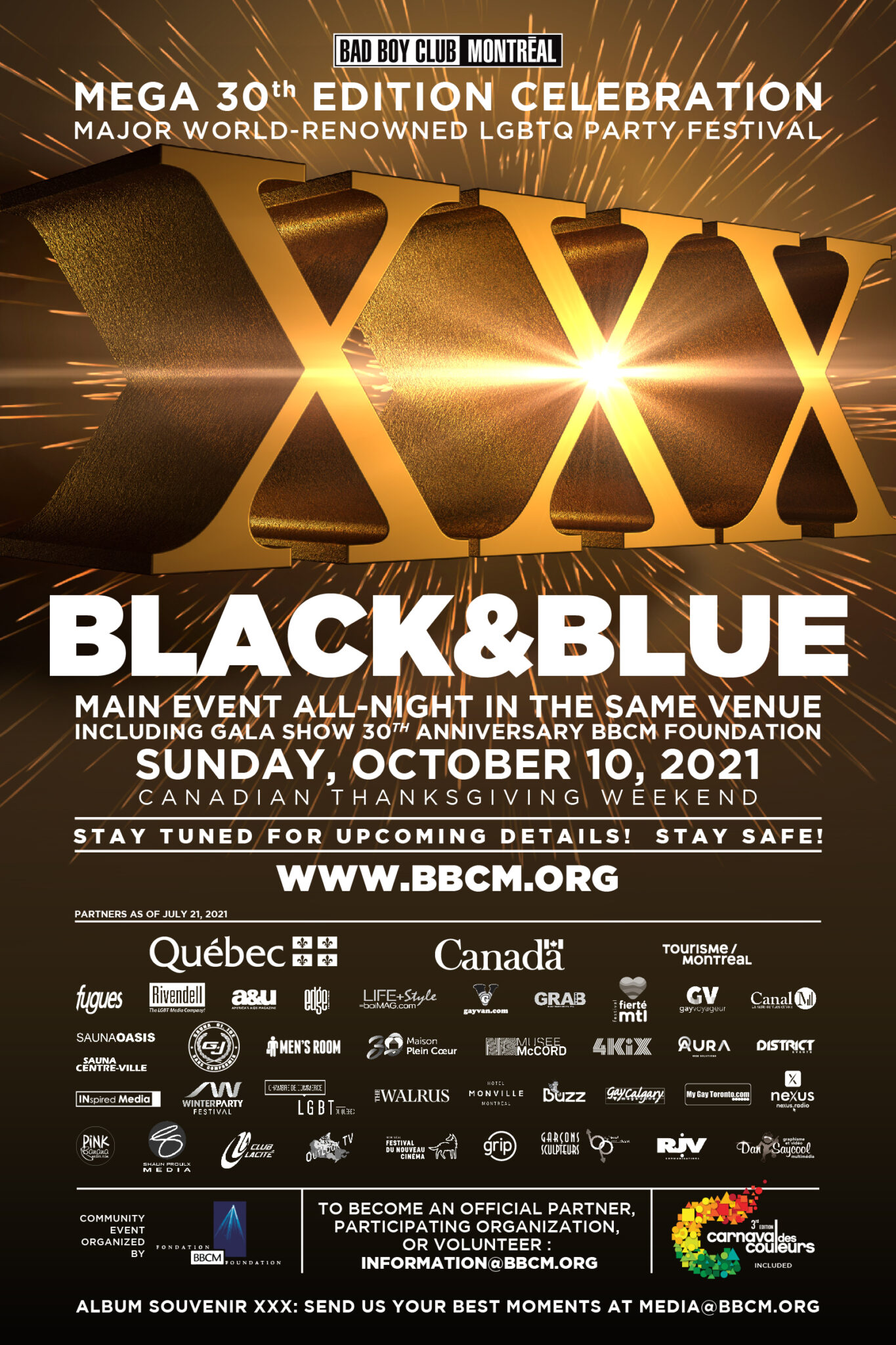 Dubbed “Mr. Montreal” by CBC Arts, Richard “Bugs” Burnett is an arts and culture journalist and columnist for various media in Canada. Burnett has been covering Black & Blue for more than 25 years.

A TOUGH CLOSE TO SUMMER