The 50th anniversary of the founding of the Metropolitan Community Church in San Diego will be celebrated June 7 in a more subdued way than originally planned as a result of the coronavirus outbreak.

All services for now are online only for viewing on the church’s Facebook page and also on YouTube. For now, it is assumed the governor’s stay-at-home order will still be in effect on June 7.

MCC had planned on having the denomination’s founder, Rev. Troy Perry, preach in a service on June 7, with the Martin Luther King Jr. Community Choir in an outdoor tent in the parking lot. 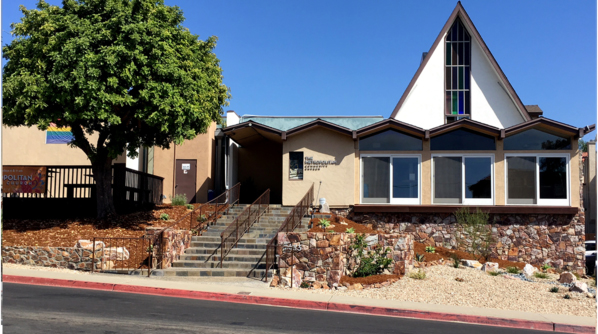 The big celebration was moved to June 6, 2021 “so we can celebrate without social distancing and be together in person,” announced Rev. Caedmon Grace on April 12.

“We are connected in spirit,” said Senior Pastor Dan Koeshall, who noted that the recent online viewing of Easter services showed “more people here right now than would fit in our sanctuary.”

“We may be physically apart these days,” said Koeshall. “Thanks for the miracle of technology, we can remain connected and we can be supportive of one another.”

“With the uncertainty of when social distancing will be relaxed,” the board of directors “felt it was prudent to wait” until 2021 for the big celebration, said Lee Bowman, minister of communications.

Bowman added that a lot of “lead time was required to put all of the pieces together, such as travel for guests and the tent.”

“We’re still going to celebrate the 50th anniversary online,” said Al Smithson, the vice moderator of the church’s board of directors and an original founding member from 1970.

“We have received a proclamation from the mayor to honor the 50th anniversary,” said Smithson.

San Diego Pride also announced there will be no parade or festival in July as a result of the coronavirus outbreak. Comic-Con also canceled its July 2020 San Diego convention.

“We do best when we hold each other up,” said Koeshall in his April 19 sermon. “We’re all going through this together. You’re not alone wherever you are.”

1970 was really a different time, recalled Smithson. “We even had what we called a bar ministry,” he added. “Every Friday or Saturday night, a little group of us would go around to all the gay bars handing out fliers to invite people to come to church the next day,” said Smithson.

Smithson said MCC was the first gay organization in San Diego to purchase real estate. The church was located in Golden Hill and eventually moved to North Park. The church lost its parking lot and sold the North Park building. MCC began services at the LGBT Center in Hillcrest.

In 2009, the church purchased a building at 2633 Denver St. in Bay Park. Thanks to the generosity of longtime members Ben Dillingham and Fred Hammond, who both passed away in 2017, the church paid off its mortgage in 2018.

A growing number of straight people attend services. Some are parents of various members and others have joined because of the open acceptance they experience at MCC.

Not everyone believes the same things. About a third of the congregation comes from Catholic faith, and others have come from fundamentalist or evangelical denominations who do not accept LGBT people.

Steve Ebner, a retired Methodist pastor, attends MCC and he leads a Bible study, which for now is online only. A Muslim man attended MCC because he wanted to congregate with an LGBT faith group that he could not find in his mosque.

Associated Press did a story some years ago that raised the question whether MCC is needed today because some denominations also welcome LGBT people.

It is true that some churches have changed, but friends and members at MCC still feel its message of God’s unconditional love is needed today.