Lured ashore by a celebrity chef

A loaded European-style breakfast board

I’ve followed the San Diego ventures of Frankie Terzoli for more than a decade. With a taste for adventure, the mercurial chef-entrepreneur once told me he had opened more than 40 restaurants all over the world in a span of 20-something years. 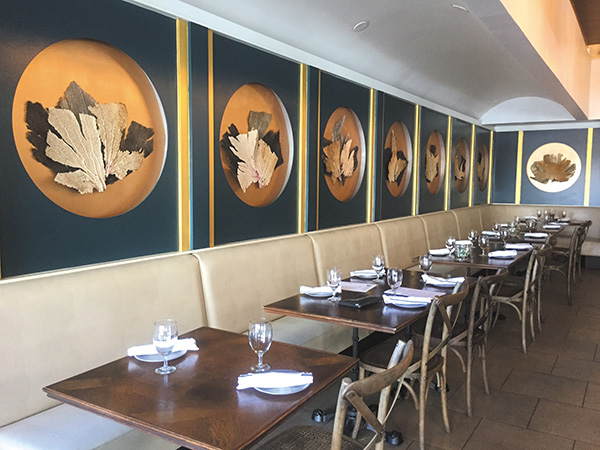 Locally, I recall his smoked meats at Frankie the Bull’s BBQ in Linda Vista, which was renamed The Bull after he bailed. In 2010, he had taken a serious shot at Creole cuisine in Hillcrest with The Big Easy, only to later introduce “Southern nouveau” meals at the antiquated Proud Mary restaurant in Kearny Mesa’s Ramada Inn.

Most recently there was Fishmonger’s Market & Seafood in the former 57 Degrees wine bar in Middletown. And through it all, he made a name for himself on Bravo’s “Top Chef” (season two) and other cooking-competition TV shows with his charming personality and no-nonsense kitchen antics.

Now he’s back in Hillcrest with Sirens Bar & Restaurant, presenting a renewed seafood concept in a stylish space previously held by Pardon My French.

Since opening a few months ago, Terzoli has struck ties to the LGBT community by bringing drag shows to the establishment on the last Sunday of every month during brunch service. He has also committed to giving a portion of those brunch sales to the San Diego LGBT Community Center. In addition, he will hold an after-party for Trans Pride on the evening of July 12, along with food and drink specials for the remainder of Pride weekend, on July 13 and 14.

Sirens is a play off the mythical, beguiling mermaids that lured sailors and fishermen to Mediterranean shores with their songs — and then ultimately to their destruction. What a friend and I found when sailing in for brunch the last Sunday in June was hardly destructive or sinister, although we were disappointed to learn the drag performers had been postponed that particular month.

But the “European breakfast board” duly compensated for the lack of flamboyance. It’s a sensational spread of artisan cheeses, cured meats and pickled and smoked fish, all interspersed by nuts, breads and dried fruits. Fresh fruits are served alongside in a bowl. The board can easily feed four people. And the spread is priced remarkably at only $18.

Having eaten our fair share of fish from the board — pickled herring, smoked-pickled salmon, traditional lox and aggressively salted smoked swordfish — we skipped over the few seafood items on the menu and found ourselves bewitched by the Italian beef and pepper omelet, a creation I assume is fueled by Terzoli’s Sicilian heritage. 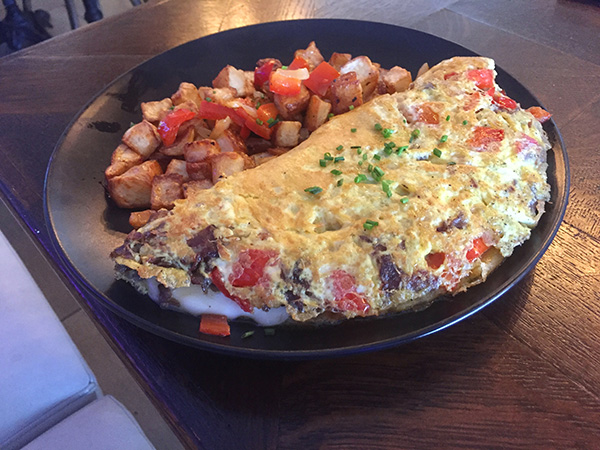 The large, puffy omelet captured thin, tasty slices of the beef as well as bell peppers sauteed to proper softness. The provolone cheese inside was a couple notches away from being completely melted, hence its unruly stringiness. It was an enjoyable omelet nonetheless, although the side of cubed roasted potatoes needed work. They were overcooked and cried ideally for some kind of vinaigrette.

Sirens’ lead chef is Esteff DeFelice Jr., who Terzoli recruited from Fishmonger’s. He’s from New Orleans and knows his Cajun-Creole cuisine inside and out. So with the lunch menu also available, we couldn’t pass up a shrimp po’boy sandwich. 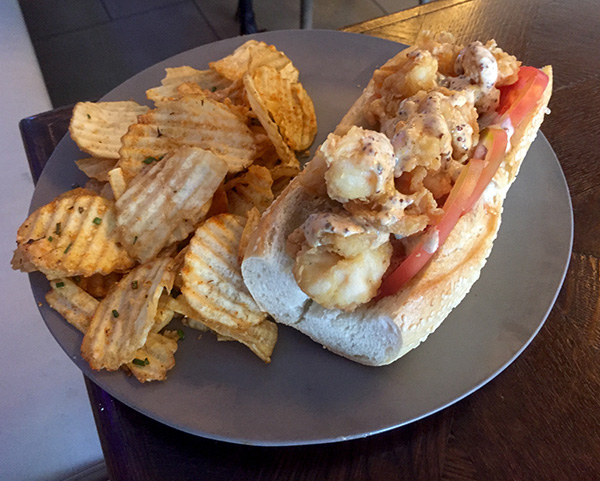 Constructed without any silly California spins, the sandwich adhered to its classic style featuring a good French roll filled with lightly battered Gulf shrimp, shredded lettuce, tomatoes and a zippy house-made remoulade. It became one of our favorite items.

There are several waffle choices on the brunch menu, ranging from those topped with Nutella or s’mores to others capturing mixed berries or crispy chicken with melted Swiss. We tried the bananas foster served with an excess of uber-sweet banana mash as well as sliced fresh bananas.

I wouldn’t answer to this siren call again mainly because the waffle was too dense and heavy to consume entirely. We later learned from DeFelice that it’s an experimental recipe using beignet dough. I vote for the standard Belgian-Liege batter. 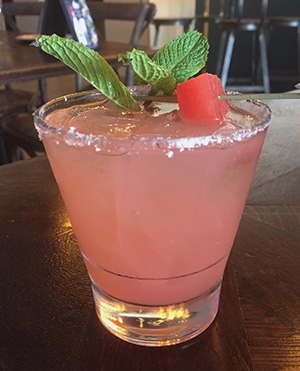 With a full bar in place, we tried a watermelon-mint margarita offering a fine balance of sweet and sour, in addition to the “wake up call” martini made with vodka and coffee liqueur. That was a little too cloying for our taste.

Terzoli’s use of earth tones and recessed lighting have added a higher level of comfort to the space. Outdoor patios in front and alongside the building remain intact, as does the intimate bar.

The establishment, however, is still taking root per the quiet, relaxing atmosphere we witnessed during our visit. We were told the slow pace was an anomaly. Yet I’m guessing that a true party vibe during weekend brunch (9 a.m. to 3 p.m.) will begin growing once revelers of San Diego Pride further discover the place — and after more Sunday drag shows are held.

Until then, those seeking a calm and sophisticated atmosphere on weekend mornings should steer their ships into Sirens now.