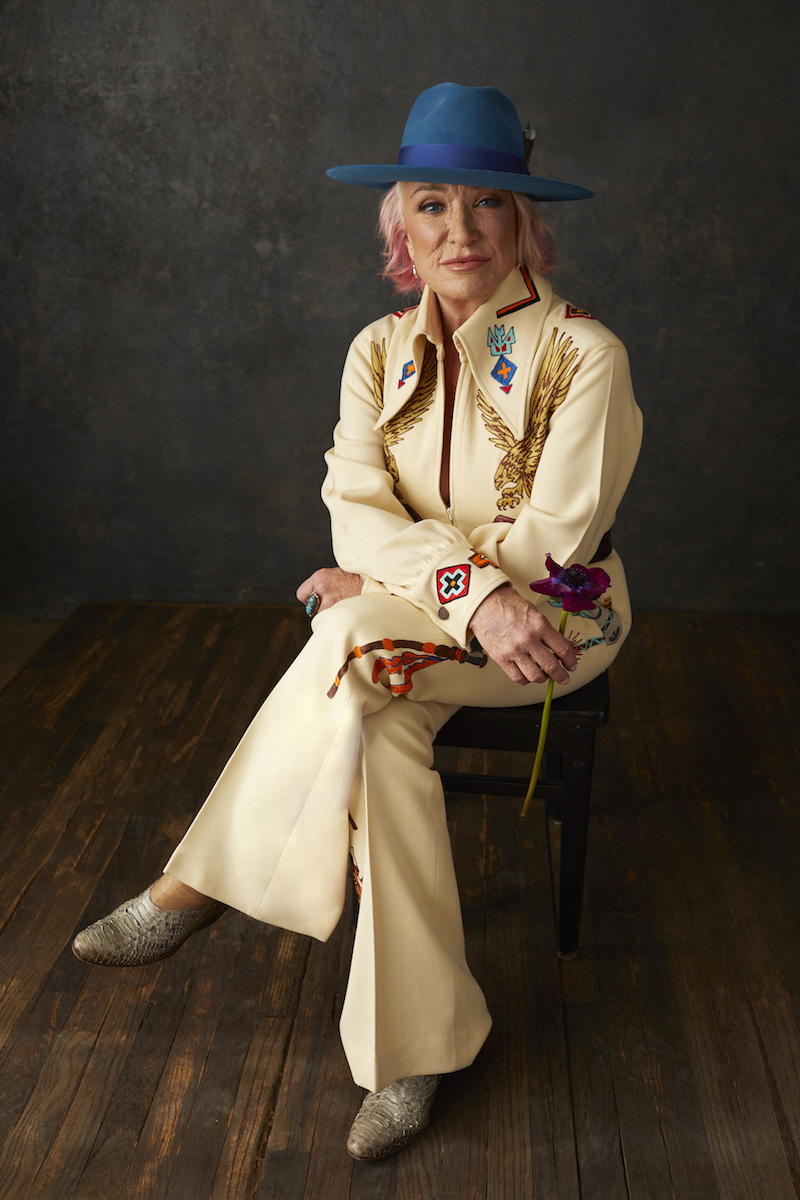 Country music legend Tanya Tucker’s elegiac coda from her first album in 10 years, “Bring My Flowers Now” off “While I’m Livin’,” is a frank reflection of leaving this life, its imagery handled with a gentle hand in the song’s music video. The video features Tucker riding atop a horse, two young girls flanking her and releasing flower petals to the streets. They stop at one point, wave goodbye. On her journey, Tucker passes a smiling preacher and a man in a convertible. Finally, she comes to a halt to share a moment with the co-writer of “Flowers” and “While I’m Livin’” producer Brandi Carlile, who’s playing the piano; the out singer-songwriter and the country icon relay a deep mutual respect through a simple tip of their hats and a warm, silent acknowledgement. Then Tucker is on her way. The video is one of the year’s best, its simplicity the perfect match for the small, heartbreakingly specific details in Tucker and Carlile’s plaintive lyrics about Tucker’s life and its message of living for those you love now. “Don’t spend time, tears, or money on my ol’ breathless body. If your heart is in them flowers, bring ’em on,” she achingly sings. The years on Tucker’s voice are as life-affirming as the song itself. And these – plus its recent Grammy nomination for Song of the Year – are her flowers. Lovingly, Carlile has brought them to her.

Even Miranda Lambert knows she’s been a little busy with the boys. She mocks her floozy image with dry wit on “Track Record” from her new album “Wildcard,” owning it and treating it as a shoulder-shrugging fact of her life rather than a rueful self-analysis. I’m obsessed with what might be the Pun of the Year, as Lambert pokes fun at her ways with men, noting that her past is “as checkered as the floor at the diner on Main Street.” She even makes time for a casual dig, namelessly calling out past exes, the “user” and the “loser.” Sonically, there are traces of The War on Drugs in “Track Record,” matching the indie-rock band’s signature sound with its hypnotic ’70s-rock-style torrent of glistening guitars and chugging drums. When Lambert sings, “Girls like me don’t mean it but we don’t know better, I got a track record,” you really do have to wonder: Is this the Grindr anthem we’ve all been waiting for?

‘Love You For Free,’ Cynthia Erivo

If church every day was Cynthia Erivo singing “Love You For Free,” my hands would be folded and I’d be at that pew right now. The Broadway star’s sparse, inviting almost prayer of a song is about unconditional love, its warmth radiating through her angelic approach to its gentle, dreamy stride and twinkling sound. The song is among over 30 originals recorded for “Hedwig and the Angry Inch” creator John Cameron Mitchell’s 10-episode “Anthem: Homunculus,” an alt-autobiography he produced for the Luminary podcast app. Its central character is Ceann Mackay (voiced by Mitchell), whose brain tumor is essentially collective Catholic guilt and shame. Erivo plays Joan the Bishop, the mother of his child. The singer’s greatest contribution, and perhaps the greatest from any of the podcast’s performers, Patti LuPone and Glenn Close among them, is “Love You For Free.” For the world’s outcasts, queers and others who have felt rejected by any church, hearing Erivo sing, “In this world, my child, you have a place,” is like falling into arms that won’t let you go.

The lyrical cornerstone of Taylor Swift’s “Lover” album, “Cornelia Street” shares some DNA with tender story-song “All Too Well,” off her 2012 “Red” release. Both summon images with the striking vividness of a photograph. The latter happens to be one of Swift’s best written songs – and now so is “Cornelia Street.” The sole writer of the song, Swift is confronting the fear of potential romantic loss, setting the scene over gentle, rolling synths like a movie whose image shifts aspect ratios. She’s riding in the backseat with her man, Londoner Joe Alwyn, drunk in love, maybe, but definitely drunk on “something stronger than the drinks in the bar.” She’s afraid of losing him. This is serious. The song rolls on like the car she’s singing about, accelerating at the chorus, a flood of sound pouring in; there are car-door and wiper-blade sound effects tucked into Jack Antonoff’s production, which also includes a heartfelt piano break. “Cornelia Street” is like going back to a good book. You discover something new and wonderful every time.

Trisha Yearwood turns words on a page into country-music magic, but the singer is at her best when those words tell a story as rich as the one CMA Best New Artist Ashley McBryde wrote for “Bible and a .44.” Yearwood’s finest moment on her latest album, “Every Girl,” is this weepy, which illustrates the lessons a father has passed down to his child. Made personal by the death of Yearwood’s own dad in 2005, the singer fondly remembers what he looked like (“hair as white as a cottonfield”) and what he taught her (to be perceptive, to love the Lord, to “take what you’ve got and do the best you can”). The guitar softening to a whisper, she reflects on seeing him strumming “this thing,” which “he left it to me like he said he would.” Before the final chorus, Yearwood reminds us, her warm, no-frills vocals accompanied by Patty Loveless’ soulful harmonies and ad-libs, of how certain things become our most prized possessions: “And if you ask me why it sounds so good, it’s ‘cause I’m holdin’ onto more than strings and wood.”

When Whitney Houston’s unreleased cover of Steve Winwood’s 1986 hit “Higher Love” was released during June Pride Month, I made my gay friends listen to it any way I could. Of note was the time this past summer when I flung open my car doors and cranked this one up, the song’s divinity thumping in a public parking lot. Not only did my closest friends hear, but so did many lucky passersby. I was doing them a favor that day, because Whitney’s never-before-released-in-America cover, originally recorded during her “I’m Your Baby Tonight” sessions and reimagined as a club banger thanks to Norwegian DJ Kygo, is gay dance heaven. She sounds incredible, and Kygo enlivens the song at every turn, taking it beyond its very ’80s origins and into timeless soul-revival territory. This is exactly the Whitney I want to remember.

—As editor of Q Syndicate, the international LGBT wire service, Chris Azzopardi has interviewed a multitude of superstars, including Cher, Meryl Streep, Mariah Carey and Beyoncé. Reach him at chris@pridesource.com.

Tags: 6 Best Songs by Women in 2019Chris Azzopardi
Next Post

Surprise! I was wrong