A golden glow seeps beneath an unassuming downtown building near the San Diego Padres home, Petco Park. On entering Callie, I’m reminded of someone’s elegant living room. Arching wood leaps over the bar with round lights underneath, representing a wave during the golden hour of a California sunset. The plush couches are arranged like skateboard rails. After years in New York and Spain, travelling and tasting new flavors, Chef Travis Swikard finally came home. Callie is his tribute to his Californian roots, with blue Mediterranean tiles, and art from local artist Kelsey Overstreet. Chef Swikard collected knick knacks from Spain and New York during training with Chef Daniel Boulud. Above an open kitchen points a beam like a ship’s mast.

The unique upscale-casual dress of the hosts and servers makes you feel welcome to unwind. The menu offers creative Mediterranean flourishes, and we immediately zeroed in on the Mediterranean feast. The feast is five carefully curated Chef selections, with or without a wine pairing. The first dish in the ensemble was a trio of spreads- Hummus, Avocado Labneh, and the Baba Ghanoush served with fresh out of the oven pita. The pita was still inflated with hot air as it arrived at our table from the oven in less than a minute. 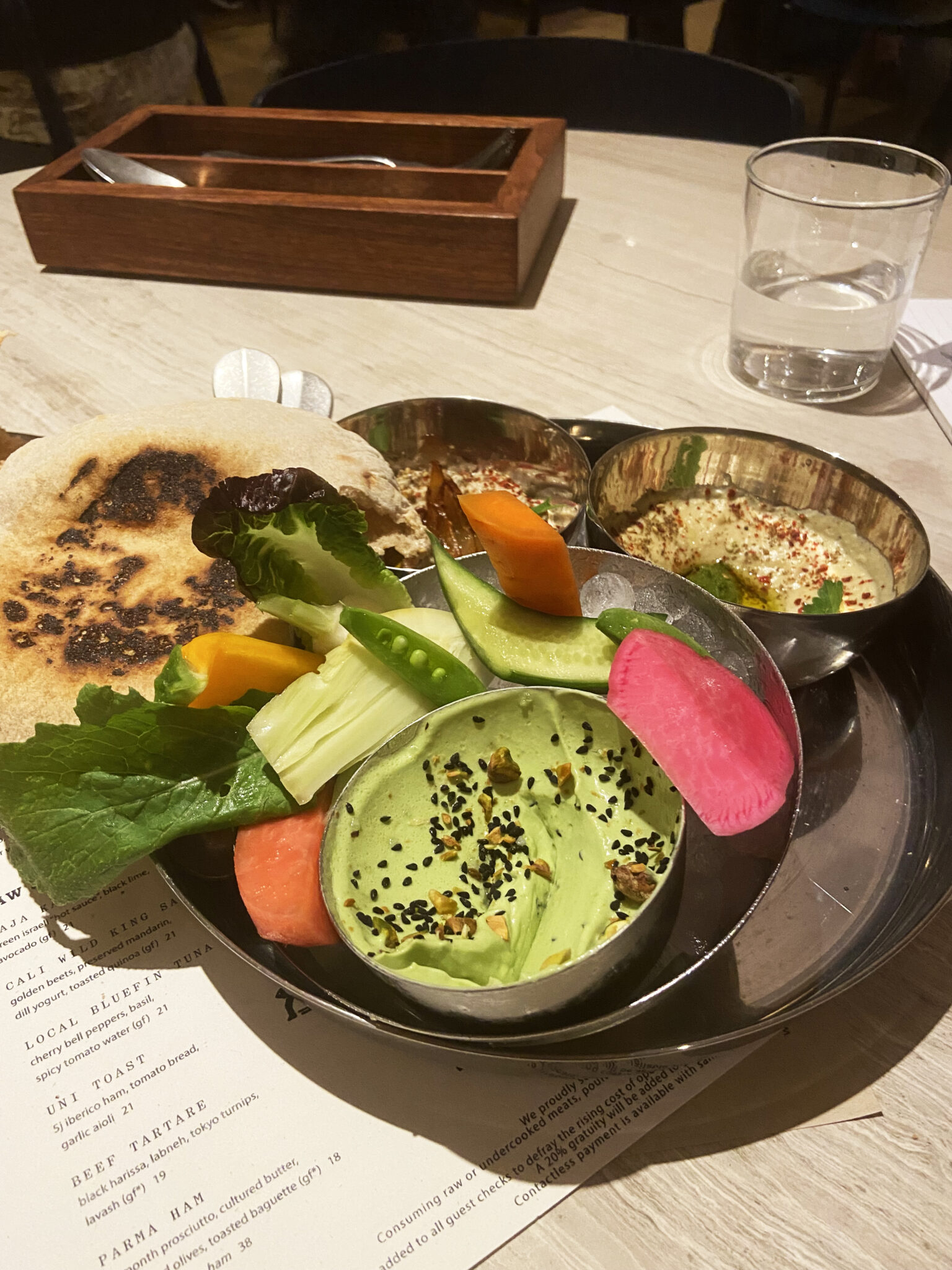 The Baba Ghanoush is a knockout dish. The roasted onion paired perfectly with the smokiness of the eggplant creating an umami taste that I am still dreaming about. I don’t know how anyone could eat baba ghanoush without a roasted onion ever again after trying this dish. The hummus was creamy and perfectly spiced. The added flavor of the spicy green zhoug gave some heat to the dish but it was not overpowering. When I first saw avocado labneh on the menu, I was concerned. I expected to see slices of avocado with labneh on top. The chef masterfully whipped it together with lime to make the most delicious labneh I have ever tasted. I took a piece of the fresh baked pita and scooped up a mixture of the three spreads. To no one’s surprise at the table, it was sensational. 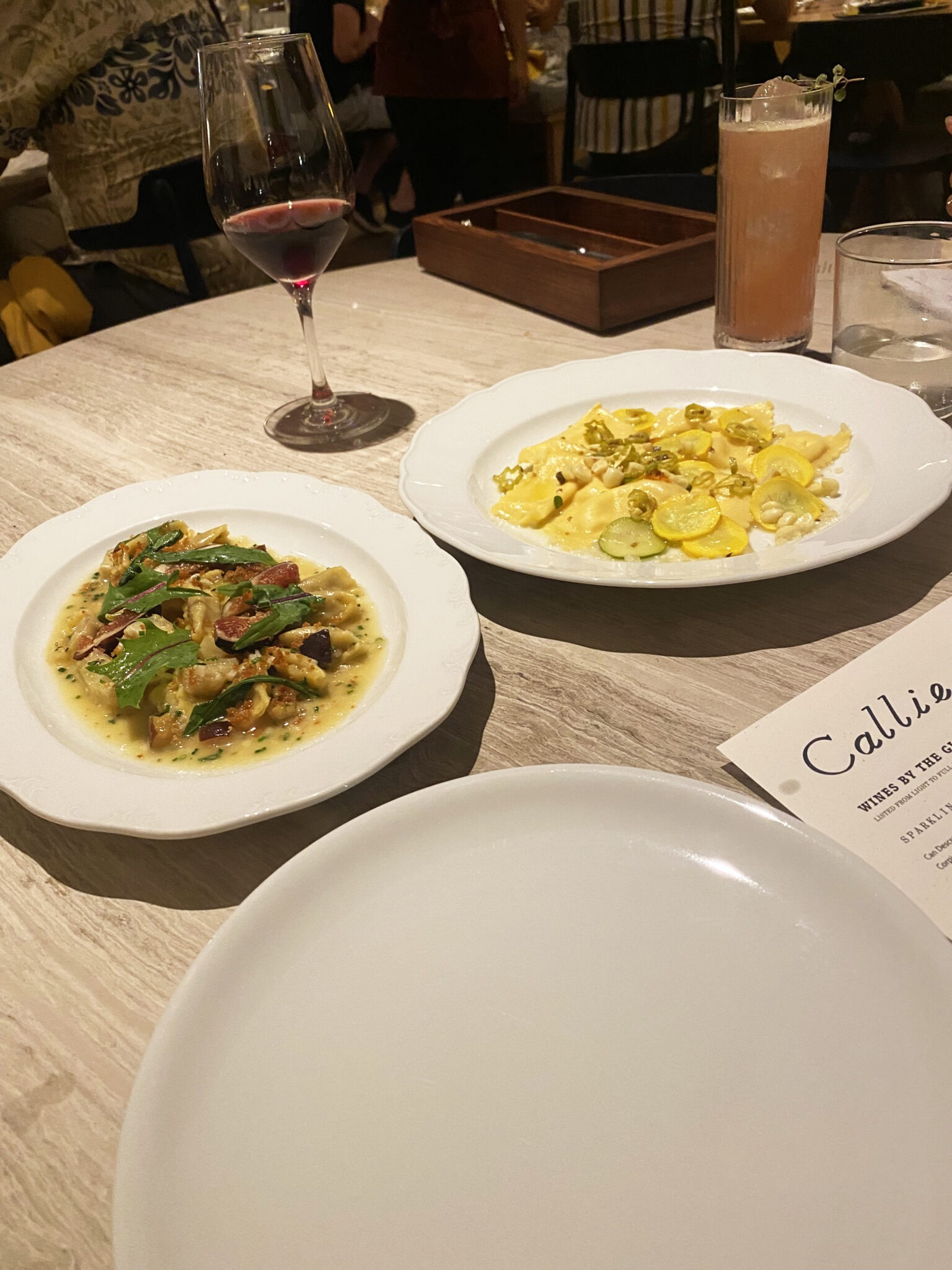 Next up was the Tunisian Brik, a dish I would never have thought to order on my own. Crispy fillough dough covered a gold decorated bowl. The server handed me a spoon to smash the top. I heard a buttery crunch. Inside was a combination of potatoes, tuna belly, and a slow poached egg. The server poured green harissa sauce over the entire dish and instructed us to mix everything together and eat it with the crispy fillough dough. It knocked me off my chair. The melody of taste and texture went perfectly together. The yolk wrapped around a soft warmth of potato and light tuna in a solid punch of flavor. 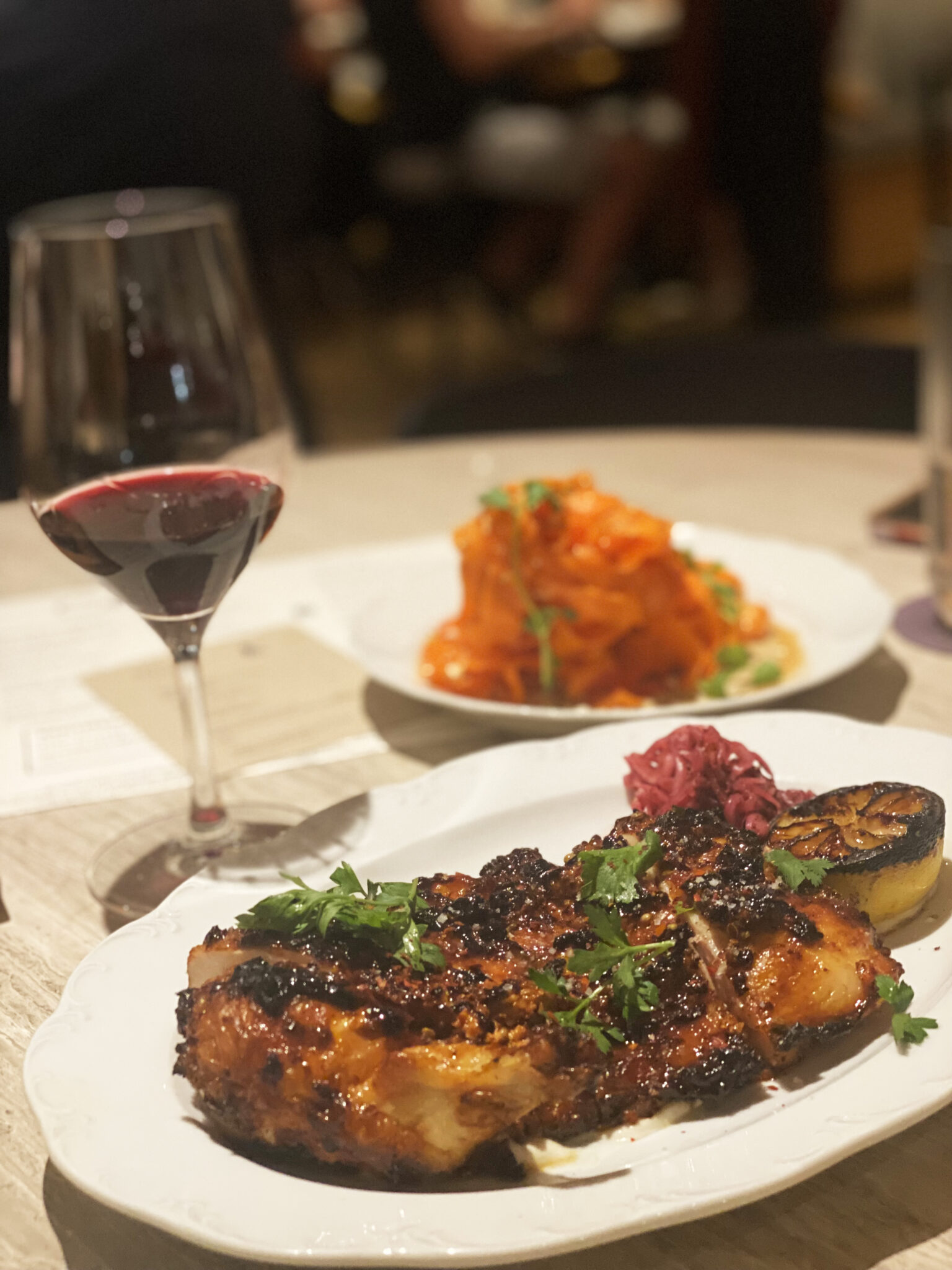 The main course was the Aleppo Chicken. This was a cut half chicken of pure delight. The chicken was spicy from the Aleppo pepper, sweet from the coriander honey and savory from the garlic yogurt. The chicken was so crispy on the outside you could snap the skin in half. Yet, the meat on the inside was tender and juicy. I had to stop the server and ask how they could make a chicken this delicious. The server said they marinate the chicken in a garlic yogurt for over a day which creates the crispy exterior and juicy meat. We took the Aleppo chicken home with us.

For dessert, we split the Eureka Lemon Curd. The sesame halva cotton candy on top added some spice to the richness of the lemon.

Beyond the food, Callie offers a relaxed, sociable environment with a true California vibe. Callie emerged in June 2021 after a difficult year of delays for the restaurant. It was originally planned to open in March 2020. Callie is finally here, and filled with delighted eaters and staff who open up to you about its long journey to get here through a pandemic. It was well worth the wait.