San Diego has always been a great destination place to visit, but it’s not uncommon to find those who visit then decide to stay or move to San Diego after they’ve experienced our beautiful city. As a bartender, for the first 20 (or so) years living in this amazing city (which I proudly call paradise), I know this to be the case with many people. I know it is not the most affordable place to live, but like anything in life you do, we do our best to make our lives happy and our dreams a reality.

I love the arts and supporting local artists in our city. As a photographer myself, I know how hard it is to get your talents noticed and your name out there in order for others to support your creativity and hard work. It is even harder if you are one of the thousands of people who have just moved here to start a new life and don’t know anyone to help you get noticed. Luckily, we do have an amazing art studio (The Studio Door owned by Patric Stillman), who has opened his doors to many new individuals who have landed on our shores. I have met a handful of extraordinarily talented artists who have passed through those doors, which has introduced San Diego to many new artists. Recently, I have become friends with a beautiful, soft-spoken, extremely talented young lady named Leah, who I am excited to introduce to you.

Leah Sarah Bassett is a transplant from the East Coast, along with her partner Shaka Wood, and originally from Massachusetts. Both of Leah’s parents were artists early on in her childhood. Her parents split when she was young and due to health issues, they were no longer able to teach her their method and style of art that they themselves created. For the most part, she has been self-taught; exploring her own talents and fine-tuning her craft to become the amazing artist she is today, but Leah has always believed it has been in her genes! She started college, worked hard, and realized that she was just piling up debt, even though she did pay through most of her college but never got to finish. Leah figured she would rather start her career in art than go completely in debt forever. After high school, she decided to become a makeup artist as a steady way to earn income and worked for more than 15 years in the industry on the East Coast. Building up her reputation with clients including celebrities and politicians and getting booked for commercials, fashion, corporate and bridal events (just to name a few), she made a name for herself and was doing great in Baltimore, with opportunities to travel for her work. Meanwhile, she was showing her art regularly in local galleries. Then she and Shaka just up and decided to start all over again — it was time for a clean slate! It has been a struggle, but for both, it was a decision they agree has been well worth it. Leah told me, “I love it here! I love our new life together and there’s so much more to explore!” 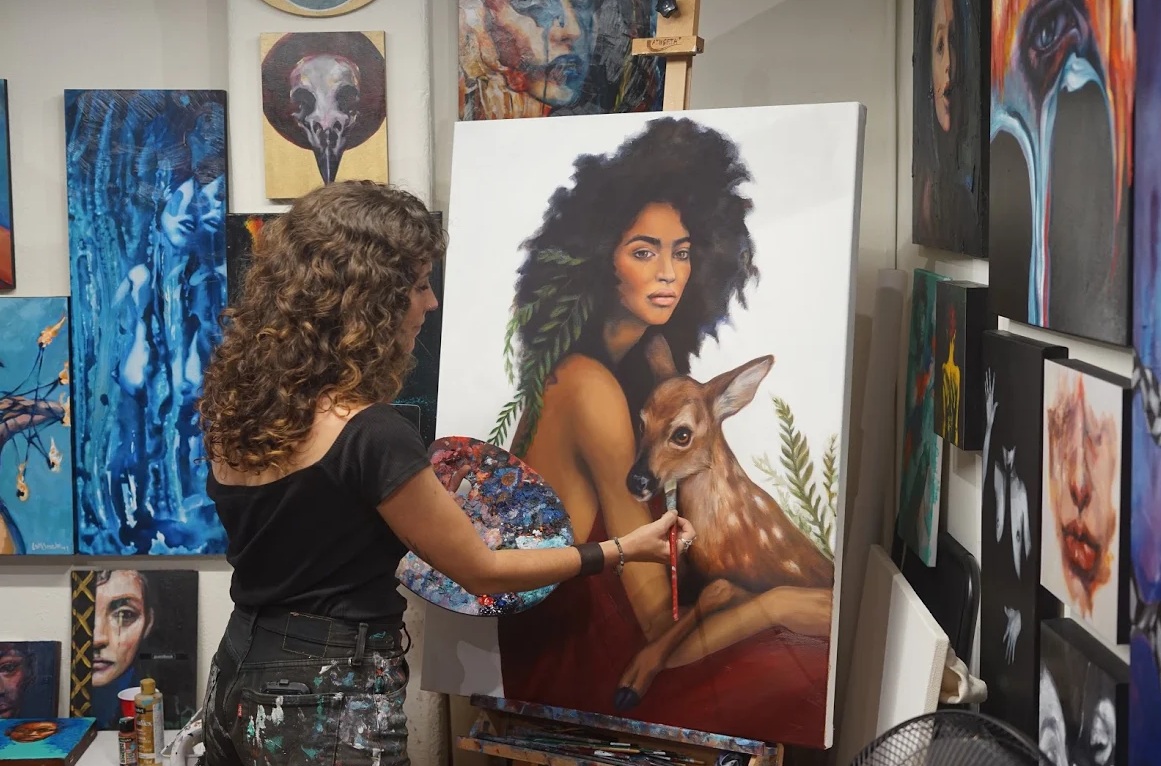 With excitement in their hearts, they moved here from Baltimore a year and a half ago. Their original plan was that they were supposed to just go on a vacation for Shaka’s birthday in April 2019 and something just kept calling “San Diego.” It seemed like there were signs everywhere they went and around every corner, it never stopped. It was as if the universe was guiding them to move here. It was on people’s clothing, in conversations — Leah said to me, “it just kept popping up nearly every day.” So one day out of the blue, her partner Shaka said to her, “Fuck it! I’d rather live in paradise than visit it!” And she said, “You’re crazy! Have you ever been?” He said, “No, but I know it’ll be awesome!” Leah just so happened to have extra flight points on her credit card, so they took a long weekend to visit in early March. They happened to find themselves staying in Hillcrest across from the farmer’s market and fell in love immediately! While here, they started checking out apartments but it just seemed as if they were not going to be able to find a place that they liked or could afford. Finally, just hours before their flight home, they were able find a great place with just enough cash on hand for the application. The great news was they were approved when their flight landed back home and on top of that, were given one-month free rent to move in (great landlord). Three weeks later, they jumped in their car and drove across country. Both thinking (at the time) this was absolute insanity! Oh yeah, to add to all this craziness when the two of them arrived, it just so happened to be their 11th-month anniversary. What a great gift to them both: new beginnings and new adventures in a new town.

Growing up and realizing that she had feelings for women made her coming-out process a bit of a challenge. Leah has always been honest her whole life about her sexuality. Her first crushes on girls and boys were early on, maybe since kindergarten and first grade she said to me. She has been attracted to all sorts of people; it did not matter what race, man, woman, Trans, androgynous, it just does not matter — she falls in love with their soul. In high school, it became much more apparent but “no dating was allowed” whatsoever. Her mother was in major denial and often would try and confront Leah because she feared that her daughter liked girls. Later, when she did mention a girlfriend she had, her mother and sister ganged up on her and told her how disgusting she was. She did not talk to them for a long time after that. More and more over the years, they’ve worked toward accepting her, but they have never really approved of any part of her lifestyle and Leah is super OK with it. She’s always been the black sheep in her family, she likes being different from them. She admits to the fact that she has a lot more fun. So she was happy to get out of the house and move on with living her truth. Leah’s partner, Shaka, is her best friend; they have learned so much from each other, and it has been a roller coaster ride for them both. Leah told me a sweet story about the two of them: “It was so adorable when we figured out that he used to come to my house to hang out with my roommates over 10 years ago. I remembered his eyes and how he looked at me so sweetly. Unfortunately, at the time I was in a relationship and he was six years younger than me.” The great news is, he still looks at her with those sweet eyes, but now it is every day. They are so happy together and love the fact that they are taking this journey together, which has brought them even closer as a couple. Shaka is also a talented and phenomenal guitarist and drummer; he has often been compared to Jimi Hendrix; he is the smartest and most clever person Leah has ever known and in her own words, “I like to say I’m ‘Shaka-sexual’ now. I have found my partner for life!”

Leah is still doing makeup to help pay bills, but since moving to San Diego and especially since COVID-19, it has not been a viable source of income for her. Her passion as a freelance visual artist has been more of her focus, while also building her art career and creating music with her beloved Shaka. Leah has always relied on her friends as her mentors; she has made some of the greatest friends through her journey, who have always been supportive. She talked about one woman, Susan, who used to spray tan at the salon when she was 18 years old. Susan got her involved and learned how to do makeup after seeing her art. Leah helped her with her portfolio and she brought her on some pretty amazing first-time gigs! The first shoot Leah did with Susan was for Vanity Fair and Leah did Ted Kennedy’s makeup with her most favorite photographer at the time, Mark Seliger. That career really helped Leah gain a lot of life and travel experience. Leah often calls Susan her guardian angel: “I will be forever grateful for [Susan] taking me under her wings; it has helped me to be able to fly.” As for heroes when Leah was growing up, she was obsessed with Michael and Janet Jackson, David Bowie, Madonna, Prince, Queen, Jimi Hendrix, and Led Zeppelin. She loved their androgyny, fabulous personalities, and performance. For her 12th birthday, Leah dressed as Michael Jackson and sang the song “Remember the Time” on her back porch for all her friends. She said she had Michael down perfectly: hat tilted, his dance moves, everything was simply perfect. Leah was in musical theater throughout high school and college. Her dream is to one day have a psychedelic band with Shaka, evoking those types of vibes, celebrating love together and sharing that love for those who are listening. If Leah is not painting, you can find her singing, dancing, playing ukulele and the flute, doing photography, hiking, yoga, taking long walks, hanging at the beach, and gardening. Her biggest love is spending free time just being silly with Shaka.

Leah is such a sweet and exceedingly kind person. As I have gotten to know her more, I see and feel the gentle soul she is and how much she genuinely loves people. She told me she loves learning about people and making new friends, especially starting over in a new city. She has utilized that energy to meet so many fascinating people. “We are all special, so alike and so different; we have so much to learn from one another.” Leah is a giver and loves to give back to the community she lives and works in. She finds herself donating quite a few makeup shoots and art giveaways for charities. In the past, she has donated to Goodwill and local food banks to help raise money. She recently participated in a silent art auction that The Studio Door held to fundraise for Art + Culture Art Action. “If you do not have any money to spare, a genuine compliment to a friend or stranger can completely change the outlook in their day or overall life! Energy is currency.”

We love you being apart of our piece of paradise, Leah and Shaka, we look forward to seeing you around, enjoying your art and listening to your music as you change the world with your talents and love for your “fellow people.”

Michael Kimmel shares his travels in TrumpLand and

Saying goodbye to Martinis Above Fourth. Read our

The fifth annual Living Out Loud (LOL) gala to sup