Having the great fortune of living in San Diego for the past 30 years has given me the opportunity to cross paths with so many amazing individuals who have touched my life. I have always said, “Be kind to everyone you meet, you just never know how many of them could change your life in a positive way.” I have been very blessed by so many of you in our community and elsewhere who have been there for me in my times of need. One thing I was taught growing up by my parents was to never be afraid to ask for help in life. It is a vital part of growing and succeeding and as you grow, make sure to help others who may come to you asking for help. One of those individuals in my life who I reach out to and who took the time to help me, and continues to help me, is my very good friend and mentor Vidal Espinosa. 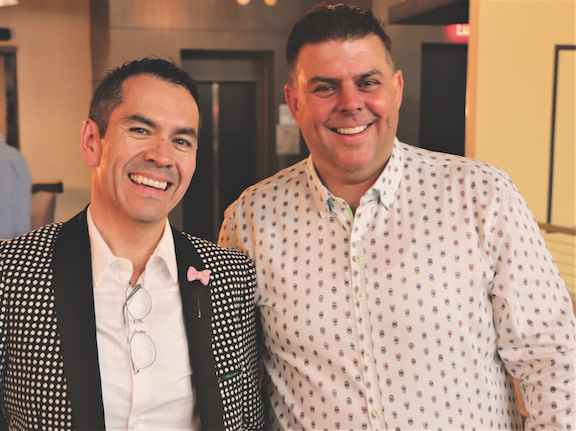 Many years ago, Vidal and I met through his partner Jeff Redondo who, at the time, was working at the LGBT Center. It wasn’t until my business partners and I were having major problems with Harvey Milk American Diner that Vidal and Jeff, of Invictus Advisors, reached out to us to help straighten out our finances. Vidal and one of my business partners stayed up the entire night going through all the numbers to find the answers to continue the restaurant. Vidal presented his findings to our investors and gave them a positive solution, which they denied and led to us closing our doors. That was a very hard time in my life; seeing my life’s dream gone. I was depressed and very stressed during that disappointing time. The great thing though was Vidal and Jeff were always there for me. Especially Vidal, with his encouragement for me to move forward in life and not let what happened bring me down, but to take it as a lesson to better my future.

Invictus Advisor International Consulting Group helps with tax planning, profit strategy and business analytics, providing great advice from a talented and knowledgeable group of professionals who are highly capable of helping your business grow successfully. I only wish my business partners at the time would have allowed Vidal and Jeff to come in and manage what could still be a successful restaurant. Learning the hard way sure is painful. What I love about Vidal and his company is they encourage people to ask for help and he is ready to help find a solution. All you need to do is ask — it could save your business or finances. Thank you both for being there for me.

Known by so many as Vidal “The Shark CFO” Espinosa, he has earned respect and been noticed in his field with many awards such as Best San Diego Accounting Firm (San Diego Union Tribune, San Diego CityBeat), Latino Champion Business Leader Award (San Diego Union Tribune), and finalist for CEO of the Year (San Diego Business Journal), just to name a few. Vidal loves numbers so much, he has made them his life’s mission and primary profession; he loves dissecting those tedious reports and translating them into colloquial language, so that business owners and entrepreneurs can understand them. My own father was a math teacher when I was growing up and going to school; I hated math and could only make D grades, so I totally count on people like Vidal.

Vidal’s childhood was more than normal, he considers himself very blessed. Growing up with two brothers, Miguel Angel and Gilberto, they were raised by his mother and grandmother; sadly, Vidal’s dad passed away when he was just 11 years old. They were very fortunate to be raised with privilege; he was able to attend private schools, go on amazing trips, and have everything one would want or need. But with all the material things in life, he and his brothers were sheltered from the real world. They were brought up in a crystal box, thinking that everyone was the same as them. Vidal told me what a shock it was to him when the realization set in that there was another world other than the one he had been raised in. Vidal never blamed his mother or grandmother, he said they only did what they thought was best — he only wished they had told them at an earlier age so that it would have been more of a reality check for him. Vidal realizes that both his mother and grandmother were only protecting them, and he knew how much they both loved him and his two brothers.

Now, he is living and growing his family life with his partner for eight years, Jeff Redondo, who is Vidal’s anchor and biggest supporter. They are opposites when it comes to business, the ying and the yang, if you will; Jeff is a people person, he loves engaging (even though he is shy) and enjoys being “The Boss” in a good way. Sometimes cleaning up Vidal’s messes, he centers Vidal and tries to bring him back to focus. At times, Vidal says he fights it but then realizes it’s for his own good. They have their differences, as every couple does, but they strive to not let petty things get in the way. It can be very complicated working with your partners, but you must learn to differentiate. Vidal’s advice to anyone doing the same: “When you are having a business discussion, let them know that it’s not personal, that it’s business, and don’t take business home — leave it at the office — it’s easier said than done but make that effort.”

Vidal and Jeff both love anything Disney, Jeff enjoys making Vidal happy and he loves seeing Jeff happy. They love to go to Disneyland as much as time will allow them, knowing that they’re in the Magic Kingdom of love and fantasies always strengthens the love they already have for each other. Vidal said to him that Disneyland is his happy place, where he and Jeff go to decompress, relax. “I don’t see it as escaping, I see it more as forgetting about the real world and enjoying the magic of being surrounded by likeminded people, people that enjoy this alternative reality.” I think we all could use a Magic Kingdom in our lives.

What I admire about Vidal is that he and Jeff give back in so many ways, even going as far as creating their own charity groups: Enciende Tu Vida (a charity that helps young Hispanic entrepreneurs navigate their dreams by guiding them though mentorship) and Invictus Advisors (a charity that helps entrepreneurs accelerate their startup companies). These organizations are here to help empower Latinos and anyone who wants to do their best, ask for help and pass it forward to others that need a lift up. It takes different people, cultures, smart minds and hearts full of love and kindness to share the world. Vidal has a heart of gold along with all these qualities, and his goal is to help others achieve their potential and find great success. Thank you, Vidal, for helping better the world with your knowledge and dedication. Never stop.

I asked Vidal for a quote to share and here is what he said: “If you are going to do something, do it excellent or really f*ck it up majorly. Don’t do things half-assed.”