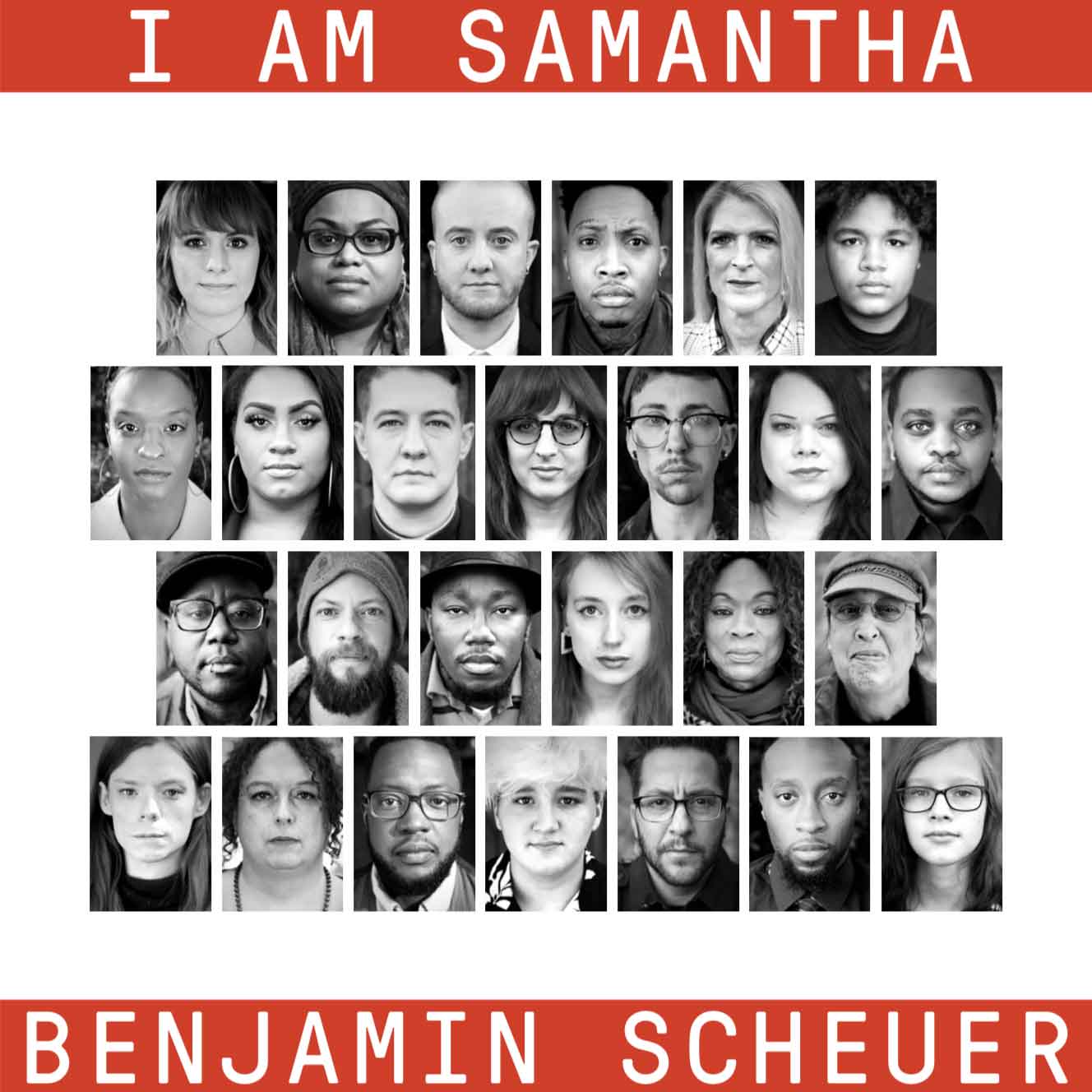 The singer-songwriter and his friend Samantha Williams, a transgender woman, recount how the latter’s life story became the subject of Scheuer’s debut single.

On a couch inside the Manhattan offices of Atlantic Records, Benjamin Scheuer beams with cautious optimism. Already a Drama Desk Award winner for his one-man musical “The Lion,” Scheuer has seen the release of his first single for Canvasback/Atlantic Records, “I Am Samantha” (out now). Accompanying it is a groundbreaking music video, which was filmed in Atlanta by transgender director T Cooper and features a cast of 27 transgender actors.

The song would not exist were it not for Samantha Williams, a trans woman Scheuer struck up a conversation — and, subsequently, a friendship — with at a coffee shop in Manhattan’s West Village several years before.

“I don’t remember our first conversation, but it had to do with writing,” says Williams, a playwright and screenwriter, who now joins her friend on the couch. That some might question why Scheuer, a cisgender, married heterosexual man, would take it upon himself to tell the story of a single transgender lesbian woman isn’t lost on the two of them. But they each feel that it shouldn’t stand in the way of allowing Samantha’s story to be heard.

“When someone writes a song and performs it themselves, I think there’s often an assumption that the writer and performer are one and the same,” Scheuer notes. “I like writing from different perspectives; it requires empathy and it requires ears.”

Below, Scheuer and Williams open up about how one simple conversation over coffee two summers ago blossomed into a life-changing experience for both of them.

BENJAMIN SCHEUER: I lived in the Village in New York City for 14 years. I was a regular at Joe Coffee, on the corner of Waverly Place and Gay Street. I would go in and do a lot of my work there — writing songs, working on writing theater. I like talking to strangers, and I met a lot of folks who became dear friends.

SAMANTHA WILLIAMS: I had been working at that coffee shop since 2013.

BS: And I had been a regular since before then. I knew Samantha before her transition. We were talking in the summer of 2018 and the song “Sean” by the Foo Fighters was playing.

BS: I said, “I can try to write a song with the name Samantha in it. Tell me about your name.”

SW: One of the first things that piqued your interest was how I had chosen my name. I said, “I did…and I didn’t.” My mother felt that she was carrying a girl, so she and my father only came up with one name when she was pregnant.

BS: I’m fascinated by stories of identity and self-actualization. The story that Samantha told me is one of the most powerful ones I had ever heard. In having the honor and responsibility to do my friend justice in telling her story in my medium, which is music and lyrics, I wanted to make sure I did everything I could to do the best job I could. I did feel a real kinship to you because you’re a storyteller and a writer.

SW: That’s an aspect of our relationship; we are fellow writers.

BS: Samantha and I went to lunch several times. I took out my iPhone, pressed record and said, “Leave nothing out.” As I was working on the song, my wife was pregnant with our first kid. I was anxious that I wasn’t going to do a good job being a dad. My kid’s a year old now and the joy of my life. And the story that Samantha told me about her relationship with herself was also very much about her relationship with her parents. So, to me, “I Am Samantha” is really a story about parents and their kids.

SW: With my parents, you have the two polar-opposite examples of how one might react to someone coming out. My mother expressed some concern for my safety, but also said, “You know what you’re doing. If this is what you need to be happy…” I went back to Cleveland, where she works at a CVS, to surprise her. She hadn’t seen me in a while. After the initial minute of her not realizing it was me, she proudly introduced me to her co-workers as her daughter. In that same visit to her store, she texted my father: “Would you like to see your daughter?” You see the three ellipses bubbles, and after 15 minutes he comes back with, “I’d rather not.”

BS: I’d finished, or so I thought, writing the songs for a record to be released on Atlantic. So I was writing “I Am Samantha” without any sort of pressure from anyone to make anything for any commercial purpose. I finally brought it to them like, “Hey guys, I wrote a song about a friend of mine. Just thought I’d share it with you.” They came back and said, “We think this is the best song you’ve ever written! We think it should be the first single on the record. Can we organize lunch with Samantha? We’d like to meet her.” Then they did something that really inspired my confidence — we all went to lunch at Morandi on Waverly Place, just around the corner from where Samantha and I met at Joe Coffee. They said, “Samantha, tell us your whole story.”

SW: You would think all the grownups would talk and the girl who the song was about would just sort of soak it in. But I have things to say and they all listened. They all wanted to know what I thought. That was a powerful indicator as to what they felt about the material and how they wanted to go about releasing it.

BS: For the video, a woman based in the U.K. named Katie McCullough runs a company called Festival Formula. I worked with Katie on five music videos for songs that I made, most of which were based around a theater piece I did called “The Lion.” When she was in New York, we sat down and we had a cup of coffee and I said, “I’ve got a song I wrote about a friend who is a trans lady, and we want to make a music video. We should get a trans director on the project.” She said, “I just saw the most extraordinary documentary called ‘Man Made,’ about trans bodybuilders. Then I saw the director of the film, T Cooper, give a talk about it. He is your guy!” And, so we got in touch with T Cooper. T cast Samantha as herself and hired 26 other trans performers. As far as I understand, this is one of the first music videos to have an all-trans cast.

SW: I knew that I was going to be surrounded by more trans individuals than I ever had been. I was excited for that, but I was also just thrilled to go see Atlanta and have the whole experience. I had no idea how moving it would be to see how much everybody wanted to be there, how eager they were to get to know each other, to hear each other’s stories and to just hang. Benjamin got his guitar out and everyone was singing along to the song. It felt like a retreat, almost.

BS: I found it deeply moving to be backstage on the set. Some of the cast members were in their late 60s and some were teenagers in high school — all of whom were out; all of whom were joyful; all of whom came together to create a piece of art about self-actualization. I met the parents of the teenagers who are in the video. Of course, they need to have guardians if they’re under 18 and on a film set.

SW: That was one of the most moving parts for me. It’s a song, in some ways, about parents and children. To see these teenagers and their parents interact as if it’s the most normal thing in the world — it’s just a mother and a daughter; it’s just a mother and their son — is something I never could have imagined happening to me as a teenager. I got to take a long walk with the mother of one of these trans teens and tell her what it meant to me to see her interact with her daughter. This child gets to grow up with that affirmation and that acceptance.

BS: When I was in high school, I not only didn’t know anybody who was trans, but I didn’t know what trans was.

BS: Basically, when we were filming, I got into Atlanta from London, I walked off a plane and into a cab, and then into a family. I was amazed by how welcoming and generous everyone was to me. I’m a cisgender, white, heterosexual guy. I would be totally understanding if there was a little bit of skepticism about, “Why is this guy, Benjamin Scheuer, part of this story? Why is this guy telling this story?”

SW: I don’t think there was even a whiff of that on the set.

BS: None of that. But can I ask you, if that question was put to you, what would you say?

SW: Well, you’re a storyteller. You’re curious. You’re open. You ask a lot of great questions. And I think that the idea you can only tell your own story is an idea that people express nowadays. But as a writer, I just find that to be a silly notion. If you’re willing to put the time and the work in to understand what you’re talking about, not only can you tell a moving story about somebody’s pain and triumph, but you can also shine a light on something that your audience might get a chance to see from your perspective.

BS: I mentioned earlier that I was writing the song when my wife was pregnant with our first child. Samantha’s story resonated with me as one of self-acceptance and also accepting your family, as well. I knew I had to put some of my own fears into the lyric in order for it to feel raw and real and necessary for me as a writer and a performer. In doing so, I found common ground with Samantha’s story — not through the specifics of her transition, but through the elements of going through what she went through. What did I learn from hearing Samantha’s story? What have I learned about her, my friend Samantha — but also about my understanding of relationships with parents and kids? What have I learned about myself? I think those are necessary questions to ask if one is to do the work of serious writing about a real person.

Watch “I Am Samantha” and the behind-the-scenes doc: HERE