gamél’s creative mission is to document the journey of Gay male adulthood through his work, which encompasses oversized realistic figurative paintings. His own struggles with religion and clinically diagnosed obsessive-compulsive disorder (OCD) form a foundation for his creativity. As he says, “There is so much more to being a man than just his sexuality.”

The artist who simply goes by gamél was born Jon Gamél in Riverside, California. He was raised in a faith-based family who moved to Idaho before returning to California. At a young age, he took an interest in art influenced by his mother’s religion-influenced landscapes.

Studying architecture and graphic design at Cal Poly San Luis Obispo, gamél found a passion for simple aesthetics. This led to a career in advertising with a technical emphasis on UI/UX (user interface/user experience) design.

After coming out at 21, gamél struggled with his religious upbringing and being openly Gay. Though he now considers himself agnostic, those personal struggles continue to resurface in his art.

He credits his OCD and, to a lesser extent, times of depression as contributors to his artistic talent. At a young age, he would paint with a focus on details, perspective and color. By continuously repeating these patterns and techniques, he began to develop his own realistic style of painting.

While traveling to Malta and Paris four years ago, gamél was inspired by the art of European artists and found a revival of interest in his own creativity. This led to a regular studio practice when he returned to the U.S. and began seriously developing a series of works centered on different types of Gay men and the path through adulthood.

With nine works completed, he hopes to conclude the series with three more to complete the journey. “Initially, my goal was to challenge myself with every piece as I move forward,” gamél said. “I’m still developing my own style at the same time as getting myself over that invisible wall that maybe restricts me from pushing myself further.”

At first glance, viewers may find themselves reflecting on the male gaze of the men in gamél’s paintings. A deeper look at the composition reveals that there is more going on underscoring spiritual elements, emotional struggles and the movement through time.

As gamél searched for meaning in his own art, he met a 75-year-old Gay man named Tim. Though there was nothing particularly unusual about him, Tim provided a connection during a photo session that pushed gamél to consider how Gay men find internal acceptance to become fully realized. [“Tim,” oil on resin and found images on 4-by-2-foot wood panel]

From there, gamél moved on to other works, including: 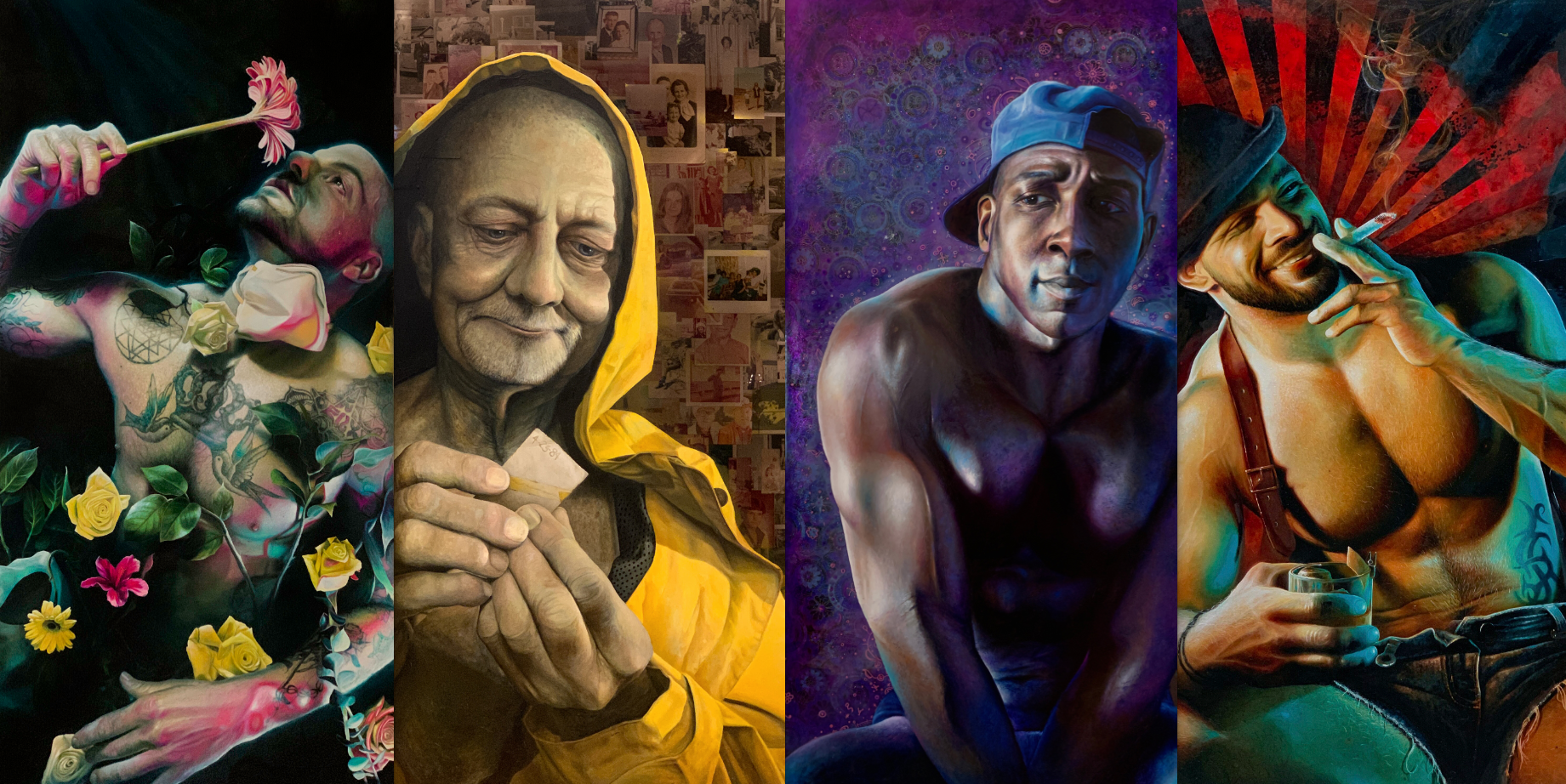 “The Wrong Side of 40” (oil on resin, transparencies and spray paint on plexiglass) — Depicting the moment in life when we realize what we set ourselves up for early in adulthood is not working anymore. The time we stop, think and reflect.

“Dark Night of the Soul” (oil on 4-by-2-foot wood frame) — Incense smoke rises to the sky indicating that requests made to divine entities have been received.

“Palm Springs” (oil on 4-by-2-foot wood frame) — A breath of awareness. Looking up and into the distance at the moment that reflection upon one’s life and sensuality merge.

“The Other Side” (oil on 6-by-3-foot wood frame) — Started earlier this year, this work is about rebirth, change and happiness in reaching “the other side” of the pandemic.

“Let the Good Times Roll” (oil on 4-by-2-foot wood frame) — Created mid-year as social distancing tested us, this piece is about getting back to what it means to once again be free with no cares in the world.

Looking forward, he plans to continue to embrace the melding of abstraction with realism. Down the road, he hopes to have his own studio gallery, publish a book of art and connect to his patrons in a more meaningful way. “I just want to be happy and be able to paint, pushing myself further,” he said.

gamél can be found online with his website jongamelart.com and on social media, including
Instagram @jongamelart. To see his work in person, you can often find him working in his art studio at The Studio Door in Hillcrest.