Al fresco all the way

Since blazing onto the Point Loma dining scene in 2016, Fireside by the Patio has been feeding Liberty Station diners an array of smoked meats and roasted vegetables cooked in smokers and ovens fueled by oak. The restaurant occupies a historic structure that served as a naval fire station more than 70 years ago. 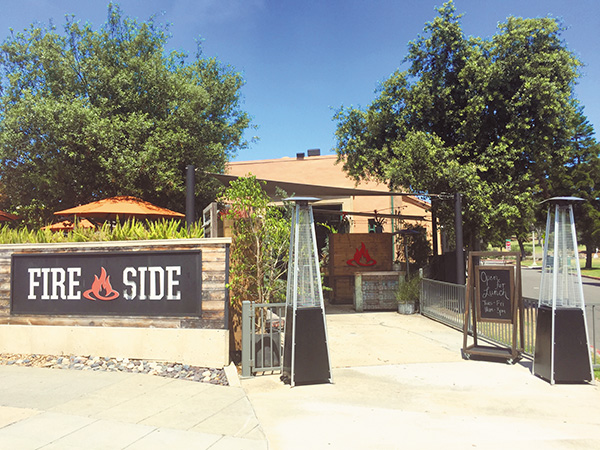 Most of the smoking and grilling equipment can be seen on the restaurant’s two spacious patios, where a majority of seating options exist directly beneath the path of planes taking off from San Diego International Airport. Though inside you’ll find an inviting bar as well as a row of banquette tables running parallel to it. The architectural details are vintage and appealing. 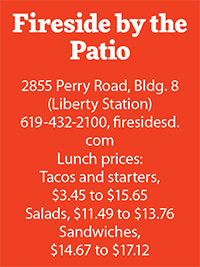 To my husband’s surprise, I made an exception by picking an outdoor perch. It wasn’t difficult given Fireside’s attractive patio featuring heavy-wood tables, orange umbrellas, custom pillows, and leafy trees incorporated thoughtfully into the layout. It was the first time I’d eaten al fresco in years—and with nary an antagonistic element sending me running inside.

Fireside is the first in a trilogy of patio-themed restaurants by The Patio Group to roll out significant menu revisions under a fresh slate of top-rung employees. Those new hires include corporate executive chef Jarrod Moiles, and chef de cuisine Juan Pablo de Santiago, both of whom held culinary positions at Rancho Valencia Resort & Spa in Rancho Santa Fe.

Also, the restaurant just restarted lunch service this month. It was offered for a brief run in the earlier days, but it catch on. Perhaps it will this time around due to increased consumer traffic throughout Liberty Station. Until it does, customers are asked to place their orders at the bar, grab a table and wait for their food to be brought out.

Moiles and Santiago collaborated on the lunch menu while refreshing much of the dinner offerings. What we encountered midday was a selection of “Baja Americana” starters, plus sprightly salads with various protein options, and hearty sandwiches that unapologetically don’t cater to vegetarians.

A plate of Mexican street corn (on the cob) was delightful. With the outdoor grill dormant at this time of day, the ears were pre-roasted the previous day and then reheated in the kitchen’s wood-fired oven upon order. If the holding process hindered the corn’s integrity, it was masked beautifully by house-made tajin seasoning, citrus aioli, cilantro and a dusting of cotija cheese.

Wood-roasted cauliflower served in a wide bowl was equally complex in flavor, thanks to the interplay between tangy apple-cider vinaigrette and sweet blond raisins. The slightly charred florets were also accented with pickled onions, chives and sunflower seeds. At last, trendy cauliflower is given an exciting, new outfit.

Our meat parade started with strips of pork belly draping a wedge salad. The star of the dish, however, was the house-made poblano ranch dressing, which made fast friends with everything on the plate — the pork, cherry tomatoes, blue cheese crumbles and iceberg lettuce. 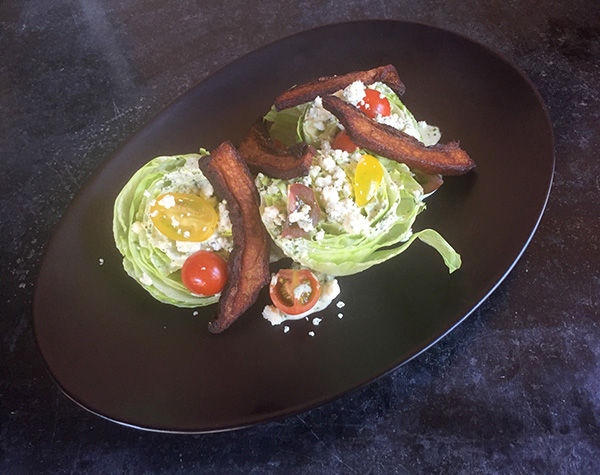 A tri tip street taco with onions, avocado and cilantro gave us our first taste of Fireside’s smoked beef, which to my liking was subtle in flavor. Conversely, the ultra-tender brisket used on a well-endowed Reuben was Texas-level smokey. Served on good marble rye with Swiss cheese and spicy slaw, the sandwich is a palate pleaser provided you don’t expect the traditional flavors of a Reuben. The high smokiness of the meat puts a dramatic spin on it. 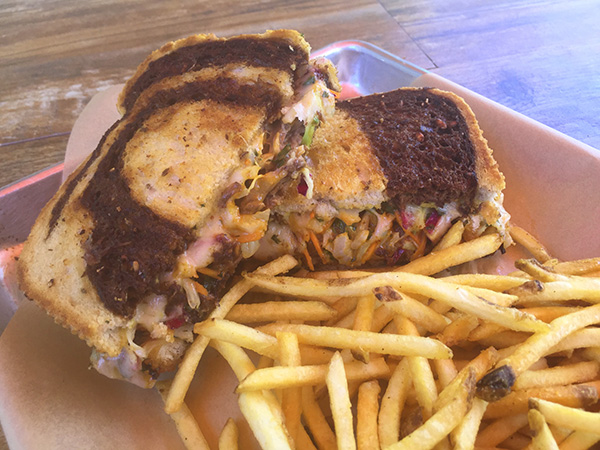 Seafood is scant on the lunch menu. There’s local ono with cilantro-corn salad and a halibut po’boy sandwich, which we tried. 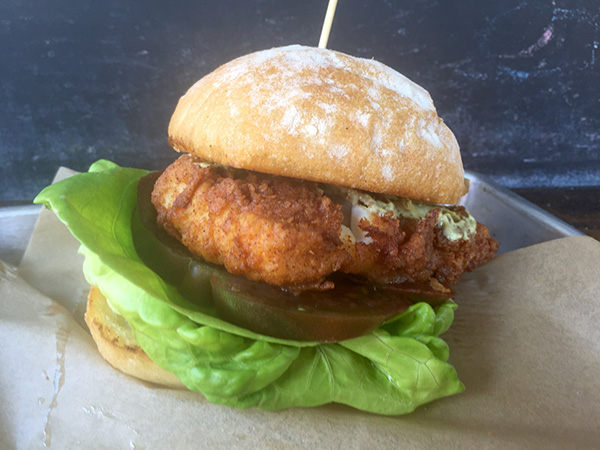 Served on a brioche bun with pickle aioli, lettuce and heirloom tomatoes, the construct exceeded in flavor its simple description due to the “chicken fried” preparation of the fish. Imagine the batter of Southern fried encasing flaky halibut. It works exceptionally well.

The company, which also operates The Patio on Lamont in Pacific Beach and The Patio on Goldfinch in Mission Hills, served up more than 700 pork tacos at this year’s fundraiser for the Rob Benzon Foundation, which helps those suffering from catastrophic events as well as charities that benefit youth and the LGBT community.

Those smoked pork tacos are on the lunch menu as well, along with other items such as smoked chicken salad with farro, a pulled pork sandwich, a double beef burger, and other enticing choices that will enable you to tune out the rumbling jet engines overhead.