3 LGBTQ short films not to miss

Now in its fifth year, the GI Film Festival San Diego is one of San Diego’s premier festivals with its military themed movies, documentary and short films. With its select films, this festival features films with the art of storytelling about the history, struggles, victories and experiences of those who have served.

Happening in San Diego Sept. 24-29 at various venues, this festival brings all walks of life to watch its yearly selection of compelling films. Organized by KPBS in partnership with the Film Consortium San Diego and the GI Film Group, submissions have a variety of military experiences, stories from people of different ethnicities, races, genders, economic backgrounds, and individuals who identify as LGBTQ. The GI Film Festival endeavors to represent perspectives are often overlooked, underrepresented and untold, but play an important role in U.S. military history and culture. 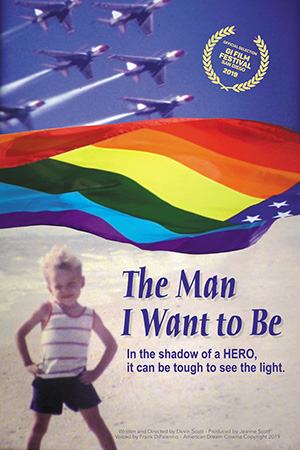 This year’s line up of films embodies the core mission of the GI Film Festival, including three LGBTQ short films with impact and heart. All three shorts play in a series of short films “Drama Block: Not Your Everyday Story” at the Museum of Photographic Arts in Balboa Park on Friday, Sept. 27 at 6:15 p.m.

It is well worth the drive just to see the San Diego premiere “The Real Thing,” directed by Brandon Kelly. In 7-minutes, this film is a gripping short that will tug at every emotion. With no dialogue, with the exception of three words it’s a journey through parental love, and the issues this film tackles are loud and clear. A staff sergeant is returning home from deployment to his son, who has now transitioned to her true self during his absence. Back and forth scenes between daughter and father, the film explores the emotional impact that both are facing with this major change in their lives as they anticipate reuniting again. This film is powerful, poignant and has all of the essential elements of filming at its very best. This film is nominated for Best Narrative Short.

“Deviant” directed by Benjamin Howard exposes the horrors of early electrotherapeutic conversion therapy in the early 1960s. During this time homosexuals were involuntary committed by their own families to “cure” them including the use of electroshock therapy, castration, medical torture and lobotomies. After a young man’s attraction to other men is discovered by his deeply religious mother, she sends her son for electroshock therapy. It is a personal journey through the revulsions of conversion therapy. It’s graphic account is disturbing to watch, but this is the essential element in the story of a young gay man who is struggling with his identity and his deep embedded faith in God. This film is 10 minutes that will make many people uncomfortable, but this film’s message is brilliantly accomplished. This film is nominated for Local Film Showcase – Best Narrative Short, Best Film Made By or Starring Veterans or Military and Local Film Showcase-Local Choice Award.

“The Man I Want to Be,” directed by Devin Scott is told through the eyes of  a boy who is gay, but whose father is a Vietnam war hero earning the nickname “Macho Joe Nichols.” This film delves into the individual elements of what it takes to “be a man” in the 1970s. It’s a struggle between father and son with foundations of fear, bravery and the quest to live one’s authentic life in the spirit of this film. This film is nominated for Local Film Showcase – Best Narrative Short, Local Film Showcase-Best Film Made By or Starring Veterans or Military and Local Film Showcase-Local Choice Award.

For more information about all films, dates and times for the San Diego GI Film Festival visit gifilmfestialsd.org/2019.

—Albert Fulcher can be reached at albert@sdcnn.com.

The art of aging well